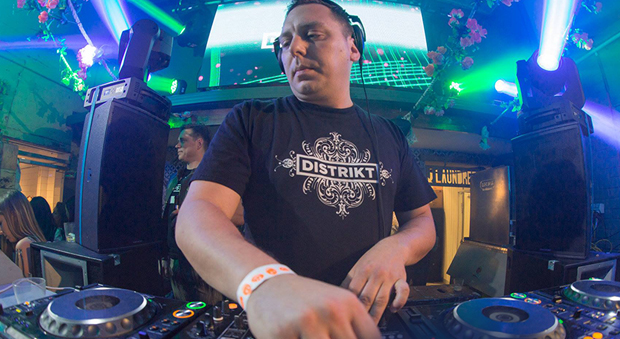 Standing at the forefront of the ever-growing West-coast house & techno movement in the US is Ben Seagren – DJ, Producer, and visionary contributor within the Burning Man community.

Ben is best known for his dual roles as co-founder and resident DJ of DISTRIKT recognized as the staple party experience of the Burn for its reputable artist roster, beautifully positive crowd experience and definitive, cutting edge sound. Playing host and DJ to well over 30,000 guests every year during one magical week in the desert, it comes as no surprise that Ben and his DISTRIKT moniker continue to entertain thousands of fans and followers all over the world.

Dominating San Francisco’s house & techno scene for over a decade with long-term residencies at both award-winning Ruby Skye (2003-2009) and legendary End-Up (2004-2015), Seagren’s impeccable taste and undeniable talent earned him the respect of even the most discriminating of techno aficionados- fans and peers alike. With a passion for connecting like minded souls on the dance floor and the continued support from a loyal fan base, Ben is propelling himself to new heights as one of the sonic architects behind tech-house’s most recent redesign.

While traveling constantly between Los Angeles and San Francisco, Ben regularly plays events up a down the California coast at Public Works, Audio, Spin, Avalon & Sound and has held court at Ayslum After-hours in Honolulu, Flash & uHall in DC, Output in New York, Heart in Miami and Nikki Beach Cabo San Lucas, to name a few. He is also constantly organizing DISTRIKT events while performing over 100 gigs per year in clubs and festivals across the world. Ben has been a guest performer at the BPM festival, Desert Hearts, Lovebox in London, Lightning in a Bottle, Symbiosis & of course Burning Man.

In 2014 Ben made his debut on world renown Chus & Ceballos label Stereo Productions. The first release was a remix of a big room banger “Blowin Minds” by Chus & Ceballos that reached far and wide. It even got played out by Joseph Capriati at the BPM Festival in Playa del Carmen. Following up this dance-floor killer he remixed Tony Dee’s track “Back in the Dancefloor” on his latest Burn EP with Oscar L. Ben just finished up another remix on Stereo called “Black Rock City”. The original track was produced by Chus and Ceballos right after their first experience at Burning Man. It is an honor for Ben to remix this track 2 years later for a festival that is such a huge part of his life.

How did you get into dance music and DJing?
I guess it orginally started with my brother Chris.. He got me into Dj’ing way back in the late 80’s. My brother his buddy Mike had turntables and a descent rentable sound system in my parents basement. They used to DJ sweet 16s and other funny middle school dances and stuff but I don’t really consider that is when I really started… I bought my first set of Technics and mixer back in 1994 after saving up for long time to buy my own. That is really when I consider myself getting into it because that’s when the endless hours started of playing my own records on my own gear and nto my friends. Back then I was mostly playing east coast 90’s hip hop, electro, acid breaks, and drum-n-bass. From there i moved over to Deep House and now mostly play Tech house, Techno and some minimal.

Do you remember a specific moment of inspiration or was it an evolution?
I think what really inspired me was when I heard Danny Tenaglia for the first time. Growing up in NY I was around so much diversity. From the limelight, to Twilo, to Tunnel, to Sound Factory, to konkrete jungle to working around the corner from Centro-Fly where Subliminal sessions with Eric Morillo started to Body and Soul on Sundays. I was inspired by all of it. Being so close to NYC definitely opened up a wide variety in my style which still shows today. There is a time and a place for all genres and I truly believe that experience shows when you really know how to read a room and adapt to the crowd and the vibe.

What camps should we check out?
My recommendation is just to hop on your bike and explore all of the art and not just camps. There is so much more the burning man than the music camps like the art and interactive life changing experiences around every corner. I can list a few of the top music camps but really want people to go there and experience the festival for what it is and not run from camp to camp or bus to catch Dj sets. Just go and explore! Let the playa provide and enjoy the journey it takes you on.

How did DISTRIKT come about?
DISTRIKT is a 501c3 non-profit music and art collective born of the Burning Man event. Our mission is to build and support an inclusive and diverse community by embracing people, music and art. Our camp originally formed in 2001 from a group of like-minded individuals who had a genuine love of banging house music, tasty cocktails, and dancing in the hot desert sunshine called The Deep End Camp. Burning Man had The Floating World theme in 2002, so we went with a pool party idea, complete with a thatched tiki bar, oversized kiddie pool, and a six-seater lifeguard stand. We called ourselves “The Deep End,” and the name stuck with us. We were dubbed “Best Kept Secret on the Playa” by appreciative bloggers and our camp became the destination day time event at Burning Man and the rest is history.

In 2008 we decided to end The Deep End on a high note as half of the co-founders decided to move on and focus on family and careers. The other half of us decided it wasn’t time to be done yet so we took a year off in 2009 and came back in 2010 as DISTRIKT. Same spot, same concept of music and drink slinging but with new ideas and fresh faces.

What special things do you have lined up for this year’s Burn that you can tell us about?
Besides our usual day of mayhem on the dancefloor we are incorporating much more entertainment this year. We have everything for stilt walkers to wings, to aerialists and also a wild fire performance scheduled for Friday. Oh and then there is the new stage-art installation by Rob Bell from Zomadic that we are debuting.

What has been the most memorable DISTRIKT moment for you?
There are 2 moments that really stick out to me. One is the last year of The Deep End in 2008. It was a beautiful set design and the end of era only to be passed along to new and fresh group of very talented and committed friends and family that soon became DISTRIKT in 2010. The 2nd was last year when we said good bye to two of our co-founders that passed away. I’ve been to the temple many times but to go there playing on Robot Heart to say good bye with our core camp, close friends and family.. that is something that will live with me forever and changed the way I look at life and the people in it. Cherish every moment with everyone. Be love. Be kind. Be humble and be open because you never know what will happen and it’s your time.

Can you walk us through some of your preparations for Burning Man?
It’s a year round project so the prep never ends lol. We are a 501c3 Non-Profit so the fundraising efforts we do year round keep us afloat. As soon as we get back from Burning Man we take about a week off and then gear up for the one of the biggest parties we do every in San Francisco called Retrospekt which is basically our decompression event from Burning Man. We have countless work weekends and inner camp activities year round.

What cool things do you have planned for 2017 and beyond?
Well this year we creating a union of music and ART. We are take a huge step in evolving our stage and bar into a large art installation. We launched a formal design proposal process in late February. After reviewing submissions, we landed on Rob Bell and his team at Zomadic as our partners in art meets music crime. You’ve no doubt spent time in one of Rob’s “Zomes” over the years. They are zonohedral architecture seen at many a festival and Burn. The design, fully modular to continue to shape shift as the years pass, lasts well beyond our 3-year average of wooden stage structural integrity. Portions of the stage will travel across California and the U.S. as DISTRIKT’s stage at many festivals and fundraisers and family gatherings. This is the largest art grant we’ve funded. Check out the Kickstarter we did here –

I just wrapped up a pretty intense fundraising tour with DISTRIKT. We visited New York, DC, Mexico City, San Diego, Reno and LA all back to back weekends which was amazing but also exhausting give the new stage build this year. Most of my events this summer were DISTRIKT fundraisers but I had some solo shows mixed in there at my new residency at Halcyon in San Francisco. It’s a brand new club with an extended after-hours license. The last track I put out was in November of 2016 on Stereo productions. It was a remix of Chus and Ceballos track called Black Rocky City. Since then I haven’t done much… I moved to Los Angeles in January and have been dealing with sound issues in my new place due to neighbors. I move into a new place in January where I will be able to fully get back into making music and wrap up a lot of unfinished projects that I started.

Tell us about your mix…
This mix is my set from Halcyon in San Francisco. It’s been an amazing year playing with some techno legends and pioneers of techno. So far this year I’ve played along Hobo from Richie Hawtins Label Minus, Carlo Lio, Nathan Barato, Nicole Moudaber & Victor Calderone to name a few so I guess you can say I’ve been on a techno kick lol. Playing for over 23 years I have a wide range of music from deep desert tunes to banging techno. I’ve basically played every genre but big room techno is by far my favorite and what I’ve been playing the most of so far this year…

Drink of choice…
Jameson or whatever else is available… Playing in the wildest parties from the desert to clubs to the beach to after-hours you drink what ever is accessible and deal with it!