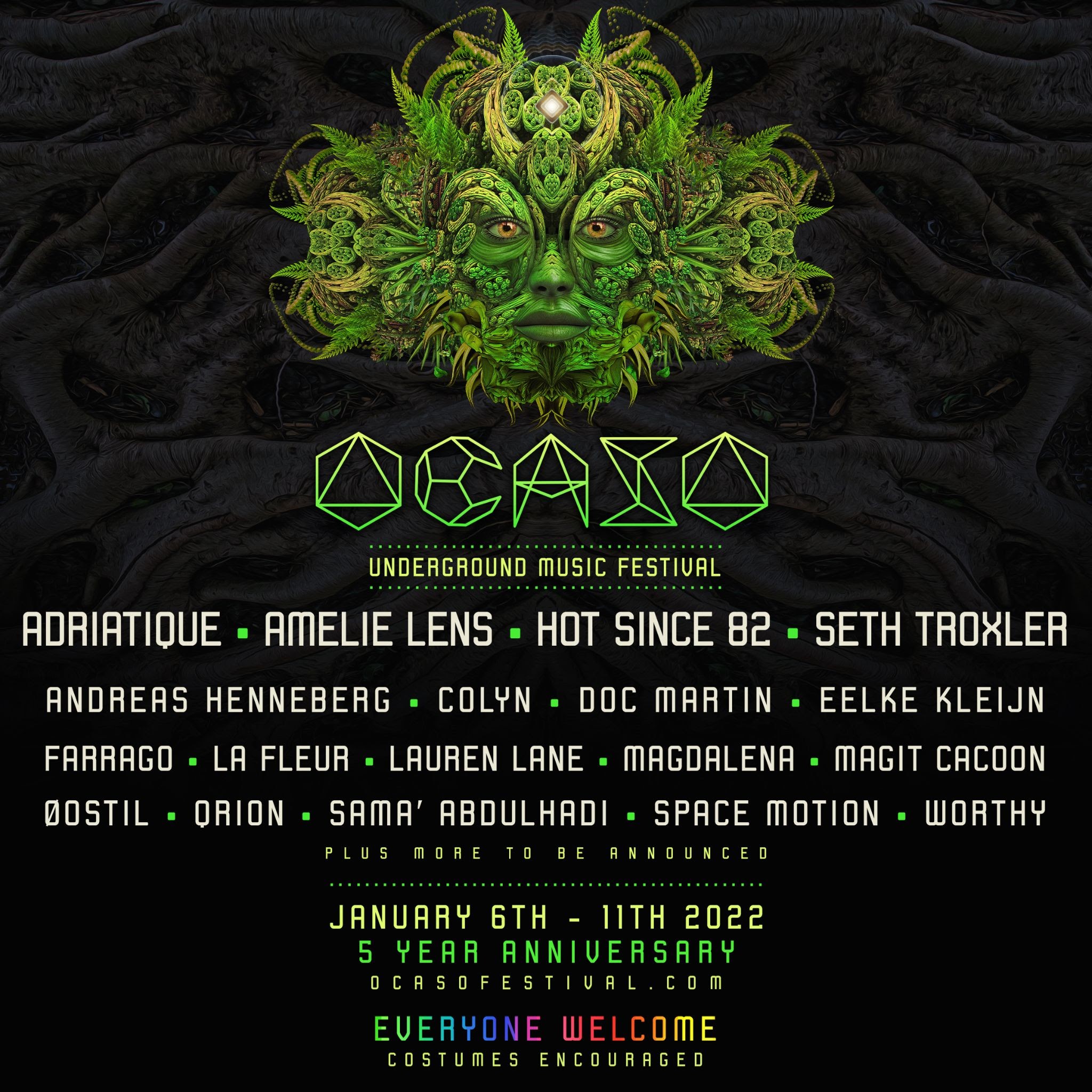 January 6th to 11th 2022Web: https://ocasofestival.com / IG: @ocasofestival
Adriatique, Hot Since 82, Seth Troxler, Amelie Lens, Andreas Henneberg, Colyn, Doc Martin, Eelke Kleijn, Magdalena, Farrago, La Fleur, Lauren Lane, Magit Cocoon, Oostil, Space Motion and Worthy
Iconic sets that soundtrack a flame-red sun as it rises from the horizon. Intimate parties in a steamy jungle amphitheatre surrounded by deep greens and hanging vines. Afternoon dances around a glistening pool in the hot sun… Welcome to Ocaso, one of the most revered and soul-enriching festivals in the world. Having worked closely with the Ministerio De Salud in Costa Rica to meet all possible health and safety regulations, this stunning festival will mark its fifth anniversary with a series of extra special surprises from January 6th to 11th 2022, across indoor and outdoor venues like nothing you have ever experienced before. Ocaso is proud to be the most affordable festival in Costa Rica and tickets go on sale on October 5th. A full six-day festival pass starts at just $109 for residents of Latin America and $159 for international guests.

The expanded 6 day event will take place 6th – 11th of January,  so visitors can maximise their time in Tamarindo, a true Central American paradise. Of course, its usual dedication to classy and cultured sounds remains with headliners including Amelie Lens, Adriatique, Hot Since 82, Seth Troxler, Samá Abdulhadi, Lauren Lane, Doc Martin, Magdalena, Eelke Klein, Colyn, Space Motion, La Fleur, Magit Cacoon, Andrea’s Henneberg, Farrago, Øostil, Qrion, Worthy, and many more to be announced in phase 2.
Word of mouth from those lucky enough to have attended this idyllic festival has made Ocaso one of the most cherished underground events in the world. It brings together a world class mix of DJs with friendly locals and music loving heads from around the globe, all in a paradise-found setting. With a focus on intimate dancing experiences, Ocaso is celebrated for its special sunrise and sunset sessions, sets on the beach, in a magnificent jungle amphitheatre surrounded by lush flora and fauna, gatherings by the pool and for the unique energy the whole event has. The natural beauty of Costa Rica never fails to provide a stunning backdrop and immersive setting for this most natural and escapist of adventures.
Say the team, “Ocaso does not support or believe in exclusion of any type. This is not what we believe the underground is about and it does not respect the roots of this movement. Ocaso does not have a VIP area, does not have a VIP pass, does not have bottle service or anything that is not to be enjoyed by every single attendee.  We belieev we are all the same and no walls should be placed between us.”

In this anniversary year expect many upgrades as well as several surprises that will not be revealed until the nights of the festival, major upgrades to projectors for a serious increase in the visual experience and changes to the shape and layout of the jungle venue to increase the flat dance space and accessibility to a larger amphitheater.
Importantly, as well as offering a platform for the next wave of amazing talents coming up through the ranks around the world, Ocaso prides itself on being a safe, diverse and welcoming space for all genders, sexualities and races. Recognising that this is where dance music culture started, Ocaso is a place where freedom of expression is embraced as a defining characteristic.  Everyone is welcome, and costumes are encouraged….
Says festival director Devin Ellis, “At our last show, Maceo Plex came back out and played with Doc Martin for one of our trademark sunrise sessions until almost 9am. There were still 4000 people dancing when they finished. Magdalena also had an amazing extended set on Sunday playing over four hours and it was one of the best sets anyone had ever witnessed. There will be even more magic in the air for this special event in 2022, so we do hope you can join in the family.”

Ocaso is a “leave no trace” event in a country that aims to be carbon neutral by the end of 2021. Attendees clean up the beach in Tamarindo before and after the festival every year and are constantly looking for ways to reduce the carbon footprint of our festival. While in Costa Rica everyone is mindful of water conservation, wildlife, and the trash they create while visiting. These things are very important to Costa Ricans, and to everyone involved with Ocaso.