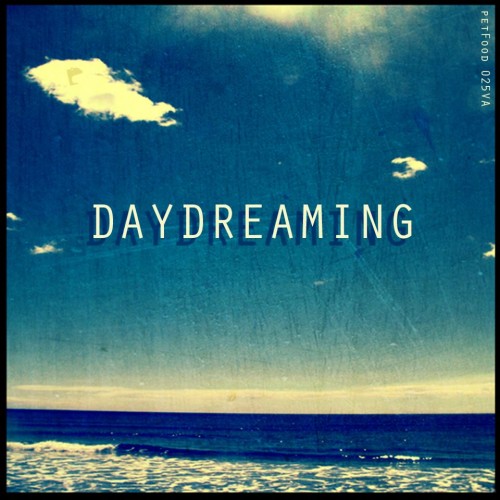 [New Release] When Daydreaming, the new compilation from LA/Miami based imprint petFood, fell into my lap a few weeks ago, I was thankful that it had reached me; it was the perfect soundtrack for a much needed day of calm.

The first part of the compilation kicks off with “Deep Inside of Me” by Waze & Odyssey. Bouncy, but still deep, the stand outs here are the vocals and effects used. Staying true to both the track and album title, the song establishes a dream-like ambience the eventually makes itself present throughout the whole record. This feeling carries over, and even escalates on the next track, “Jaded,” by No Artificial Colours. My personal favorite, Poupon‘s “Make Ya,” utilizes every element that defines the genre, from deep bass lines to sharp claps to echo filled effects and vocals; it’s hard to decide whether you want to lay there and enjoy the music on your headphones or blast it out of your speakers and dance in your room alone — the song is suited for both. Part one closes off with another favorite, Kry-lon‘s “Brooke Shields.” Using sweeps, trance-like synths, and deep, echoing vocals, “Shields” has an intense break followed by a drop into a resounding bass line that could fill any void.

Part two opens with “I Can’t Let You Go,” an ’80’s influenced track by renowned producer and label co-founder Lazaro Casanova. While he lets the bass line shine when it needs to, Casanova keeps it pretty simple. It’s the synths, which sound like a cross between the Beverly Hills Cop theme and Depeche Mode’s “Enjoy The Silence,” and the Temptations vocal sample, proclaiming that he can “change anything from old to new,” that really make the track special. A calm, airy feeling dominates the middle of the compilation until Terrence Pearce‘s “Something.” The drums, which sound like they were lifted right out of Michael Jackson’s “Beat It,” kick in right away, slowly bringing you out of any meditative state brought on by the earlier tracks. The song layers elements and effects gradually, including a synth that becomes the focal point of the song, eventually (and pleasantly surprisingly) becoming a full-blown dance track. Daydreaming closes off with Codebase‘s “Chicago River,” another light and calm record.

Individually, many of the songs on Daydreaming would be great for the dance floor, but as a whole the record is perfectly suited for a day where you can sit back, relax, and just love life.