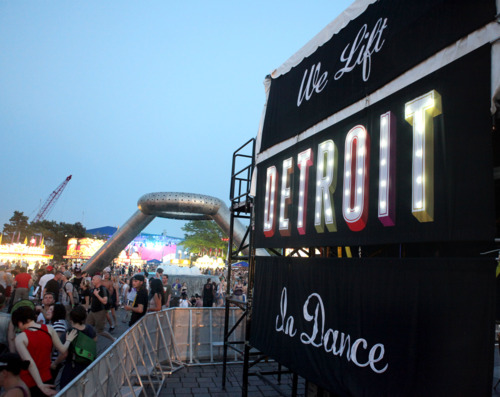 While the vast majority of artists descending on Detroit this May will be behind the decks DJing, there are also a number of live acts booked to bring their stage show and gaggles of gear to the event. We’ve highlighted a handful of live performances we are especially excited to catch, to help break things up a bit between delving into so many DJs throughout the three days (It was notably difficult to choose just five, as they really are all worthy of a mention, and deserve to be sought out on site):

The great mirror ball in the sky is sure to be shining on high when this seventeen-person act out of Brooklyn takes to the stage. Denizens of disco making their way to Detroit will undoubtably find themselves getting down to the ensemble’s enlivening and uncompromising performance. Even Scissor Sisters frontman Jake Shears has caught on to the band, claiming “it’s the best disco music you’ve ever heard.” SOLD.

Exactly a year ago, Techno titans Speedy J and Lucy revealed Zeitgeber, their collaborative project together. Their self-titled release on Lucy’s own Stroboscopic Artefacts dropped last June to high acclaim, and the two made their DJ premiere with a 90 minute back to back set on Boiler Room Berlin shortly thereafter. Their appearance at Movement will mark their US debut, and is sure to be a journey into the most abstract abyss of all things experimental.

Voices from the Lake

Another collaboration, VFTL is the alias of Donato Dozzy and Neel, longtime friends who hail from Italy. The duo made their live debut in the mountains of Japan at The Labyrinth Festival in 2011. They were recently on Tim Sweeney’s Beats in Space, and have been taking their new live show on tour, including stops in San Francisco for As You Like It and at Output in Brooklyn. Of their self-titled album, released in 2012, Pitchfork wrote “It’s some of the most inventive techno in ages, it’s some of the prettiest ambient you’ll hear on any German techno label, and it’s a unique kind of entrancing that would feel hokey if it weren’t so undeniably attractive.” It was named album of the year by Resident Advisor.

Despite being shrouded in mystery (his Soundcloud merely offers “Dance music from Montreal, Canada”) Jacques Greene has over 100,000 followers, and for good reason. He produces incredibly endearing indie electronic songs, his repertoire even including a notable and official remix of Radiohead’s “Lotus Flower.” He just debuted his live act at SXSW, and before he plays in Detroit, he will be taking over the tables at Output, the world-famous U Street Music Hall in Washington, D.C., and the Annie Mac Presents party at WMC. Although we’re not quite sure what to expect from his show, something tells us it will be a treat. If you dig his sound, you should definitely head over to his Soundcloud page, where a number of his tunes are available for download

Stalwarts to the old-school underground sounds should flock to see Adam X’s animated analog performance. Better known to many under his Traversable Wormhole alias, Adam played an integral role in pushing electronic music forward in the early 90s, veritably bridging the gap between Industrial and Techno. Originally based in Brooklyn, he ran the first all-techno US record store, Sonic Groove Records, before becoming one of the first Americans to make the move into the German market back in ’92. Now residing in East Berlin, he continues to bring his acid-tinged, industrialized techno to ravenous ravers around the globe.

*Buy tickets to Movement HERE and meet us in Hart Plaza!*

Check out our past Movement Monday Features: