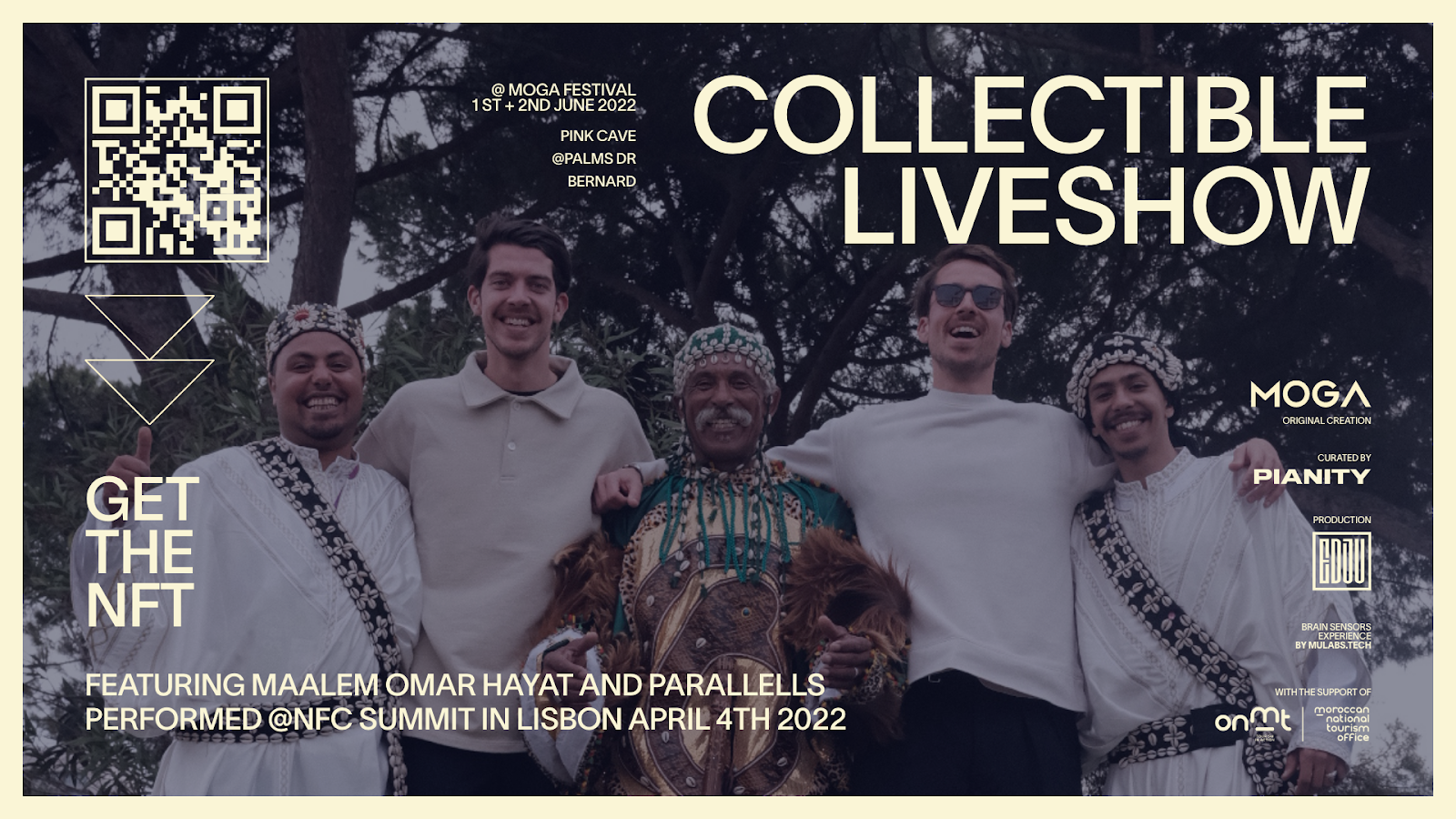 MOGA Festival, born in Essaouira and now also exported to Caparica near Lisbon, is to unveil its first and groundbreaking audio NFT on the industry-leading music platform Pianity. It takes the form of an all new and original audio recording of Maalem Omar Hayat x Parallells that was shot at the Non Fungible Conference in Lisbon on April 4th and 5th 2022 and included biometric brain sensors which measured emotional engagement of the artists while they played.

Prices start at 30€ for an audio only NFT and 150€ for a full audio and visual recording, and a film of the performance will be shown as part of the OFF MOGA Festival offerings and Maalem and his musicians will also play live once more at the main event at Reîa beach on Saturday June 3rd with Parallells.

The full audio live (24min) was recorded, mastered and minted overnight as an NFT available on Pianity. This NFT + video of the live performance was bought on a blind auction but kept secret to the public until MOGA this week.

During the recording of the exclusive Maalem Omar Hayat x Parallells performance, MOGA partnered with Mulabs (@muLabsDAO). They fit the artists with biometric brain sensors in order to extract their emotional engagement throughout the live show. They used EEG (Electroencephalography) biometric sensors like the Muse2 and the MuseS and MuLabs proprietary patch to extract the emotional reaction of the artists. Emotional Engagement is a metric of motivational approach or withdrawal from a stimuli and is computed by performing a ratio between the left and the right brain hemisphere alpha band frequency. This project is also part of a series of bioNFTs (biometric data Non-Fungible-Token) collection being launched by MuLabs by collaborating with a series of artists and festivals.

A film of the performance will be released for the first time during the festival and will be an immersive experience that takes place in the Pink Cave, a dark room linked to Palms Dr Bernard, on Wednesday 1st and Thursday 2nd June during MOGA‘s two free parties which form part of the OFF offerings of the main festival. The video will be looped all night so can be enjoyed by festival goes at their own leisure. What’s more, Maalem and his musicians will be at the festival for a new special live performance with the Parallells duo on Friday 3rd June at Casa Reîa.

This move takes MOGA into the next chapter as it combines real world musical experiences with the latest internet technology. Ever since the acclaimed festival’s very first edition, it has fused electronic music and traditional music from Essaouira at every episode with headliners such as me, D.o.P, Stavroz and many more.

Going from a live showcase experience directly into a NFT in the digital world is something that has never been done before, until now. It is another evolution in this cutting edge festival which has always set up collaborative projects with electronic artists and traditional Moroccan musicians in the lead up to their main event.

This is just a first step from MOGA as they look to unlock new experiences for their tribe with web3 technology. 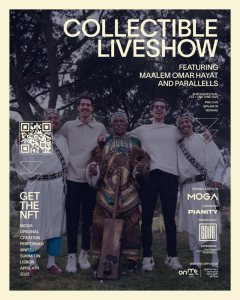