Meadows In The Mountains Festival: Off The Beaten Path 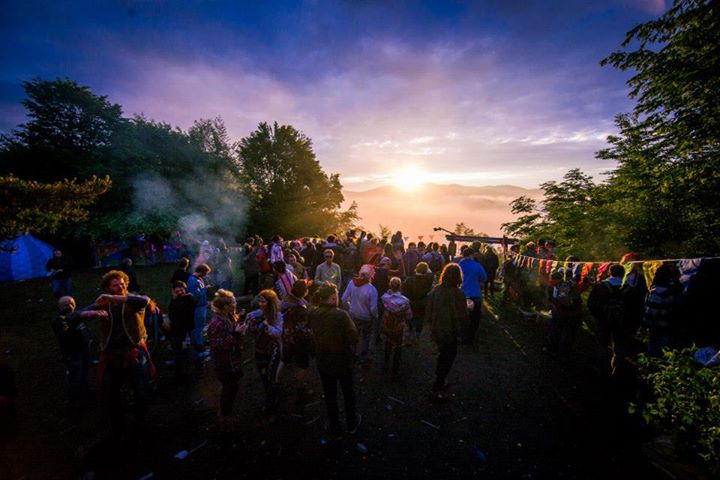 Although the summer dust has settled, the memories linger on through our winter haze-and personally, my thoughts jump back to the blissfully bohemian, absolutely mental time I spent in Bulgaria at Meadows in The Mountains Festival. Elevated 850 Meters among lush greenery and enclosed by the peaking landscape of the Rhodopian Range lies the small village of Polkovnik Serafimovo, transforming for a June weekend to host an intimate number of international music heads for a stunning and unconventional festival experience.

Family run and musically directed by Cambridge-born brothers Benji and Damian Sasse, Meadows began only 3 years ago blossoming from an original group of 50 friends to about 350 souls in 2013, trekking from various international locations to see what the mystical mountains had to offer.

[Damian] “Bulgaria…I think it all came about when I introduced a Bulgarian painter I worked with to my parents. They all got to know each other and over time he suggested visiting his homeland!  To cut a long story short, my parents ventured over and fell in love with its simplicity and beauty.  The village they where shown offered them so much history, legends-Orpheus’s place of birth is 50km away-and breathtaking views, they snapped up the chance to buy and it is now the place they call home!”

It was word of this stunning landscape, sacred ground and an artist line up to match that drew me  and my companion on a rowdy flight from London to Plovdiv, to then board a bus for a wild excursion through streams and towering trees until we made it home. We jumped on the option for modern accommodations-as unmodernized and camping were also on the table-and were pleased to inhabit the ex-mayor’s beautiful house for our stay, along with the best crews from the UK and Ibiza. Before the music even started, we already felt like part of the Meadows family, yet it was not until we journeyed up the muddy mountain to the festival grounds that next day that we truly understood the adventure that was to follow.

[Damian]  “At a point in my life, I had become fed up and negative about the general music scene including festivals. So, I had been to visit Papa and Mama Sasse and found a lot of time on my hands and decided to adventure the surrounding ridges and valleys covered in the most lively and colourful meadows I had ever witnessed. I came to a halt up at the highest point and sat down to take in the never ending view across the Rhodopes Mountains to Greece. My peripheral vision invited me on this journey around the ridge as if I was there to site plan a future music festival, and every stone wall and woodland I came to I found more things to add to my now ever-growing festival map…”

This feeling of exploration guided the weekend; whether climbing up the tree-house next to the main stage, stumbling across a trampoline that had you bouncing over the peaks or wandering aimlessly down the sunrise slope to meander in solitude, you felt as if you were breaking new ground each day. Yet, although the landscape awarded the freedom to blaze your own trail, the sense of community was strong, held together by the authentic and peculiar cultural immersion put to a soundtrack that compiled some of the most diverse, beautiful sounds imaginable.

A multifaceted range of artists graced the two stages and represented a wide range of genres throughout the weekend. House and techno were emphasized, notably the stylings of The Priory, Bruno Schmidt, DeadEcho, an epic tag set from Seb Voigt & Nisekay, the most marvelous sunrise flow from Moomin, a DJ/live set from the bizarrely entertaining San Proper and the funk & disco stained selections from Gadi Mizrahi and Nick Monaco.

“Obviously house will always hold a special place in my heart, but live instrumental music compliments it very well.  And there is so much unsigned talent out there too, why limit yourself?  We are striving to be diverse, all that matters is its good music and that’s down to opinion.”  [Benji]

Although electronic music drew us in initially, it was so refreshing to enjoy some live acts as well. Cosmo Sheldrake’s innovative folk presence and youthful spirit wowed, Venus Bushfires put everyone in a trance with her therapeutic hang drum, and of course The Colour Movement-Meadows family originals-brought their wickedly bluesy, vivacious energy the second night and had an entire crowd of house heads going nuts.

As Meadows approaches its 4th romp up the mountain this June, Benji notes an environmentally conscious shift for the future inspired by his time on the West Coast…

“For me California was a game changer! Seeing how the festivals operate out there in comparison to Europe, its hard to believe the difference in the mindset of the organisers and the punters. I don’t know how it will fare, but we will try to implement a ‘Leave No Trace’ policy this year. Not only are the festivals so ‘green’ but they seem much less corporate with less visible sponsorship and a more soulful feel. Add the hordes of giving, spiritual people and the undeniable ability to find some of the most amazing locations my eyes have ever seen (e.g Burning Man/Symbiosis) and you have yourself a real festival…

…we don’t want this event to be just another music festival – we want it to influence people in the way they live life. What better way to inspire someone to do as much as you can with the little time we all have on this planet. A fundamental linchpin of Meadows, which will come with time, is to educate people on how we are damaging our home and how we can all easily implement a new way of thinking into our lives to protect it.”

Meadows In The Mountains Promo 2013 from Benjamin Sasse on Vimeo.
This community holds strong throughout the year and the guys are set to get the crew together at parties in London, Berlin, Sofia and Amsterdam for Kings Day.  So, if you happen to be in the area, contemplating festivities as the temperatures rise, I suggest getting acquainted with these absolute legends whose passion for quality music and creative flair might just convince you to brave the Bulgarian mountains for an endearingly cultural and authentically underground experience.