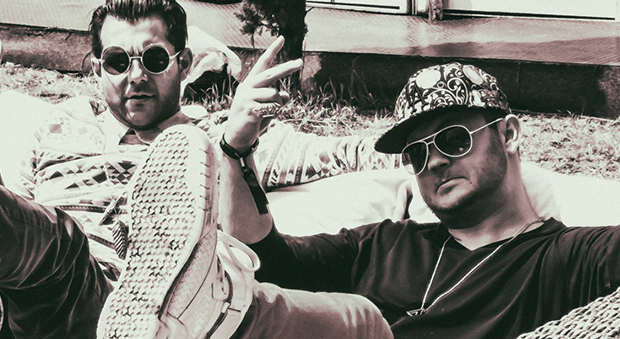 Ricoshëi struck gold when they’re debut hit “Perfect Like You” was signed to DJ Koze’s Pampa label. Since then the two have released remixes on Culprit and Fat Wax Recordings and their latest single “If Ever” on their label, What’s That?.

The duo keeps it on the deep end for this Lovecast. Enjoy!

Interview and tracklist below…

How did you first get introduced to underground dance music? What is the most challenging part of becoming a full-time producer and touring artist?
Jake: My introduction to underground dance music was via 10,000 person NetwerkOne raves in Maine [1999]. I was 15. I started DJing later that same year and being involved with organizing underground/warehouse parties. As far as the challenge of being a full-time artist, I would have to say it’s achieving your personal goals while maintaining the integrity of your art as well as your integrity as the artist. The key is doing that with longevity and diversifying over time so you’re not burned out, jaded, or self destructive.

Nikko: I got into underground music when I was about 15. It must’ve been around ’98 or 99. At that time I was listening to a lot of Carl Cox, Judge Jules, Tall Paul, Digweed, Sasha and stuff like that. One of the hardest aspects of being a full-time producer and touring artist is the balance you have to keep with other aspects of your life like health and family.

What has been the most exciting turning point of your career so far?
J: After releasing ‘Perfect Like You’, the Ricoshëi rocket ship took off. Heavy touring, performing at acclaimed festivals around the globe, mad press from all angles, die-hard fans, dare I say groupies…the whole shebang. Since then, we’ve been building an extremely firm foundation to solidify the career longevity I was referring to in the previous question.

N: I guess when our first single started getting traction. That was a very exciting moment. Our songs went from having a couple hundred plays a week to having 10k plays an hour on Soundcloud. We were flipping out! The moment we hit the 1M play count on Spotify was also a huge moment for us to reflect. Last month, Pete Tong played our latest single ‘If Ever’ on his Essential radio show on BBC1. That was the first single we released on our own label ‘What’s That?’ officially. It was nice to get that kind of airplay on the label’s debut.

Where is your home base? If someone were visiting there for the first time, what clubs and/or parties and/or restaurants would they want to check out?
N: We both live in LA. Southern California is just a wonderful place to live in. I’d tell people to try a few things. I’d tell them to try the burger at Father’s Office, visit Dan Sung Sa for late night Korean finger food & beers and to try the pizza at Mozza. Those three spots never disappoint. I could recommend hundreds more but we’ll leave it at that for now.

J: I’ve been in LA 14 years. I moved out here a few months after graduating high school. Some fun underground parties are Dig Deeper, Midnight Lovers, Dialogue. Prototype @ Lot 613 are doing great weekly underground bookings. Rhonda is always a blast for a mega dance party. If you want to teleport back to the 70’s for some classic rock, roller disco, PBR’s, mixology cocktails, and getting down on the dance floor, then hit Good Times at Davey Wayne’s. For grub, check out Baco Mercat, Bottega Louie, Sushi Gen for sashimi lunch plates, Ta-eem Grill for Kosher Israeli, and Honey’s Kettle Fried Chicken is bomb. I could list hundreds more, as LA’s food culture is rich.

What advice would you give to an aspiring producer?
J: I would say “be different”, but I’m not sure that’s even good advice in today’s music industry. I guess it really depends on the individual producer and what their goals are, but the bottom line is: Work your ass off, because there are thousands of other artists in your genre who are as talented, as driven, and as connected as you are. What is going to set most aside from the rest is drive and ambition.

N: Don’t compromise. Stick to what you believe is right and don’t ever let anybody pull you down. Another big one is to respect the space between the elements in your songs. The silence or breathing room between these elements is just as important as the elements themselves.

What’s on the horizon for Ricoshëi in 2017?
N: We have a new single coming out on ‘What’s That?’ called ‘Bruce Lee’ – That should be coming out at the beginning of June. We have also been working on our debut album for a long time and are finally at a point where we are finally putting the last pieces together. Besides that, we’ve also done a couple remixes and an original song for Armada Deep that will be coming out very soon.

J: Studio and some shows in North America this spring, then around the time ‘Bruce Lee’ drops this summer, we’ll be doing a European tour for three/four months. Back to CA for Burning Man, then another North & South America tour this fall. Lots more music coming out this year too!

Do you have any hobbies outside of music?
N: I love fishing, BBQing and hanging out with my wife and my dogs.

J: Snowboarding, rock climbing, exercising, cooking, and being outdoors. Sounds like I should put “SWM…..” at the beginning of my answer

What are some touristy things you do while playing in a foreign city?
N: I try to visit some recommended restaurants and get into stuff the locals do. Maybe visit some dive bars, go to some live music venues to check out the scene or visit some art galleries/ museums.

J: With time permitting, I like peeping historic sites, landmarks, and museums. Tap into some of the local culture via food/nightlife, and hit some secret must-see nature or city spots that friends or locals tip you off on. Something off the beaten path. Adventuring is always key, as constant traveling and doing the same stuff can be mundane, even in different cities.

Dream gig…
N: Headlining the main stage at the first festival in outer space. Whether it’s on the moon, or the ISS or outside of our solar system doesn’t really matter.

J: Grammys would be tight.

Name one of your go-to tracks…
N: For the dance floor: Nina Kraviz – Love Or Go (KiNK remix) – That track is such a groooover! If we’re talking about my go-to track to get amped up before one of our live shows or before I go out with my friends on an off-night… I’d have to say Joe Walsh – Life’s Been Good.

Tell us about your mix…
N: We wanted to do something very special for you guys so we took our inspiration from a few movies and included some of the dialogue in the mix. Every now and then you’ll hear some spoken words from very cool movies like Midnight Cowboy, Gravity, Persona, Melancholia, The Dark Knight, A Few Good Men and Fear & Loathing in Las Vegas to name a few. The music selection we did trying to find songs that were not necessarily what you would expect on a dance music mix. We just took all kinds of stuff and stitched it up together. Then we laid down some keys over it and gave it our own touch. So in many cases, the versions of many of these songs are unique to the mix.