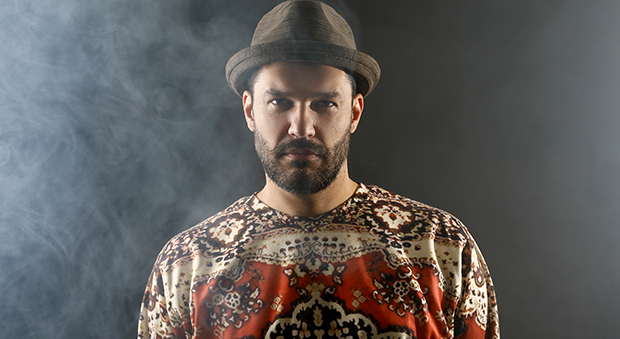 Moving to Berlin in the mid 90s Phonique swiftly established himself as a successful promoter, gathering a solid fan base via his residencies at Berlin nightlife institutions Tresor and Pfefferberg.  His true career break came in 2003/4 following the massive success of his debut album Identification on esteemed label Dessous. The Red Dress climbed to the top of the German club charts in 2003 and firmly positioned Phonique as a rising star. The warm vocal house hit For The Time Being featuring Erlend Oye, an artist best known for his dj kicks series and his bands Kings Of Convenience and Whitest Boy Alive, followed in quick succession. Collectively these tracks would position Phonique as one of Europe’s most in demand Djs, earning him three(!) Dj Awards for best deep house artist in 2008 and 2010.

Phonique’s production schedule can only be described as prolific. To put this in to perspective, over 500 Phonique entries can be found just on beatport for acclaimed labels such as Dessous, Poker Flat, Crosstown Rebels, Systematic, Souvenir, his own label Ladies and Gentlemen and more recently Katermukke and Bunny Tiger. The 2010 track Feel What You Want, a track from the Kissing Strangers album gained over 40 million views while later the 2012 non vocal track Vincent Price also got a staggering 10 million views respectively to date!

Phonique’s three critically-praised albums attest to his evolving, diverse influences, deep knowledge of house music, and masterful intuition to serve the dance floor. A fourth studio album due for release in beginning of 2017 on Ladies and Gentlemen, sees him reunited with vocalists Ian Whitelaw and Richard Davis and begin new collaborations with the likes of Stee Downes, Digitaria and Eddie Flashin Fowlkes.

Phonique continues to draw huge crowds with his extensive touring schedule. His special relationship with Brazil sees him touring there up to six times a year, while invitations to perform around the world made him already perform in over 60 countries and on festivals from Tomorrowland to Creamfields.

Enjoy the mix and learn more about Phonique in the interview below.

How did you first get introduced to underground dance music? What is the most challenging part of becoming a full-time producer?
When I was about 16 years old I heard tracks like inner city – big fun or ten city – thats the way love is at a party and i felt in love with this style of music and then there were those private parties where they played D-Mob – we call it Acieed and I went to the record shop and started to buy this music. From then on I was looking for parties and clubnights where this house music was played. It took me even that far that i travelled to Paris on my school holidays to go to the club ‚Le Boys‘ where the back then unknown Laurent Garnier was one of the residents. I wouldnt call myself full-time producer, more full time dj. The producing is more a hobby.

What has been the most exciting turning point of your career so far?
Well the lucky part about my career is that i did many babysteps to get where i am now. when i played my first warm up at my own party, it was a big step. but when i played a prime time set for the first time, it was the next big step and then producing the first music and finding a label and the first release already got picked up by Chloe from Paris for a big compilation. then after a few releases switching to Poker Flat Recordings and Dessous Recordings was another milestone, getting a Tiefschwarz remix for ‚The Red Dress‘ and climbing to #1 in the German Club Charts was the next step. My productions with Erlend Oye and my first Brazil tour and then winning the Ibiza DJ awards as best deep house dj/producer in 2008 and 2010. When my track ‚Feel What You Want‘ became popular on Youtube without being released as a single at any time and hitting 1 million clicks, climbing up to 10 million clicks- that felt just unreal. Up to today, that track had over 50 million clicks on Youtube. But also as i feel more like a dj than a producer, all those long sets, playing 8 hours at Panorama Bar, playing 8,5h at Warung in Brazil and then moving over to the hotel, where the Warung crew put up a soundsystem for 100 people to have a proper after party and playing another 8 hours with Solomun back to back was surely memorable. Or everytime I run into Seth Troxler, he is super excited to see me and asking me to play join him to play back to back at some after hour session and then for example one time ending up in Kiev playing with Seth and Maceo Plex until I had to jump on a train to get to my next gig in Donetsk… there are a lot of crazy and memorable moments, but i would never see it as a turning point, it was always another step in my personal evolution.

Where is your home base? If someone were visiting there for the first time, what clubs and/or parties and/or restaurants would they want to check out?
I guess you heard about Berlin. so you are aware of the vivid nightlife we have. Clubs like Kater Blau, Watergate, Suicide Circus, Wilde Renate, Else, Ritter Butzke or Panorama Bar are all exciting. Restaurantwise I can recommend some great vegan places as Berlin seems to be the new capital city for vegan and healthy cuisine. Places like Lucky Leek, Daluma, Klub Kitchen or Pantry are all delievering great food for different occasions (not all are purely vegan).

What advice would you give to an aspiring producer?
Just keep doing what you love and try to produce something unique.

What’s on the horizon for Phonique in 2017?
My 4th album is about to get released this month and with it a few remix eps. and of course I am travelling a lot, doing a little release tour from Armenia to Brazil, all over the world.

Do you have any hobbies outside of music?
I love playing poker and creating and trying out new stuff in the kitchen.

What are some touristy things you do while playing in a foreign city?
As I am a read foody for vegan cuisine, I am always excited to check out local approaches to that. And the more you travel to the same destinations you make friends and spend time with them and they usually know what to check out in their hometown.    Dream gig…  Having all my friends from all over the world in Berlin for a 48h party open air in the summer at some place like Kater Blau with all my favorite dj friends.

Name one of your go-to tracks…
Ninetoes – Finder  — It’s such a classic and works in all kind of parties, you can drop it at some underground party to bring some light onto people and it fits because of the very percussive beats, but you can also drop it at a more posh party because of the sunny disco sample in the middle.

Tell us about your mix…
The mix reflects in one hour, what I am usually djing. it starts a little balearic deep housish and turning into some kind of tech house with references to some house classics, which appear as little snippets during the tracks and while you are more and more getting into the groove, the atmosphere will change a little bit to the very Berlin style deeper smarter tech house by Frankey & Sandrino, whose Acamar track was the big tune on every festival the past 20 months. They are about to release this new killer tune soon, which you can already find in my mix and from there it goes over to another Berlin master producer Andre Lodemann and before the mix ends with my latest release ’Something To Remember’ we have Tim Greens remix of ‚Beautiful Girl‘  one of these tracks which stucks in your head forever.

Drink of choice…
A cold spinach and peach smoothie, but when it comes to partying I am all whisky coke.