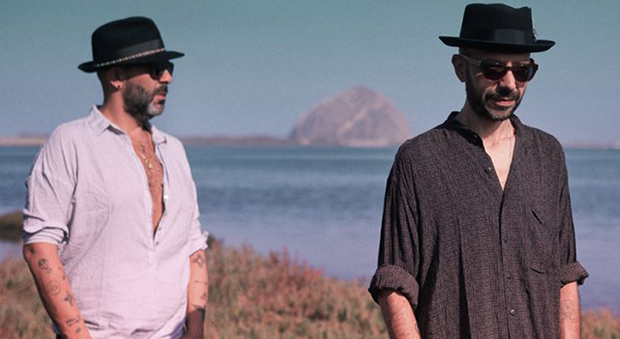 Alex and Pietro have been a part of the Circoloco phenomenon since its inception in 2003–playing DC10 in Ibiza countless times and traveling the world repping the brand. Besides Circoloco, the two have controlled the dance floors at the top of the top clubs and festivals worldwide; including Panorama Bar and Watergate in Berlin, Movement in Detroit, BPM Festival in México, Womb in Tokyo, and Fabric London to name a few.

DJing parties is not all they do–on the production side, System Of Survival have released music on many prominent house music and techno labels, such as Bpitch Control, Culprit, No.19 Music and My Favorite Robot. Later this year Alex and Pietro will be releasing a full-length LP on the illustrious Get Physical Music–two tracks of which are on their mix.

Having System Of Survival joining our Lovecast roster is special. We’re honored to have them onboard. Check out their excellent mix and read more about the duo in the interview below.

Interview with System Of Survival

How did you first get introduced to dance music? How did your Circoloco residency come about?

Pietro:
It all started from the movie Beat Street (1984). Until then (regardless of my age, I was too young) apart from the hours spent in the classroom, my only thought was to have fun (including skateboards, bicycles, and other games) with my friends until night. Anyway back to the time of “shock”, I remember that I was stuck for the duration of the movie to the screen (I was in a movie theater) hypnotized by the way the actors danced to the soundtrack. It was the beginning of the love between me and music. Sounds like electro / disco / funk / rap with this beat that never let up. At this point I needed something that would allow me to somehow record the music. I received a boombox from my family and I began to record on tapes everything that sounded like that music from radio and television (these were the only instruments available at that time). Once I had reach a certain number of tracks recorded I went down to the street and with other friends we went looking for a place, usually the entrance hall of the buildings was the favorite spot for everyone, because of the smooth marble floors where slipping, spinning and especially doing the “MOONWALK” was much easier. Unfortunately, all of this lasted very little. Of course, after a few minutes someone came to complain and drove us away. So, let’s say that my story as dj starts at this time and under these circumstances.

Obviously growing up with the advent of new technologies all the things became a bit easier, we started to travel, participate at the first house party (for us in those years the Italian scene was fantastic), and going around for the records store all over Italy, where we bring the MixTape of the previous weekend that somehow would help you to know the title of the Vinyl that hit you.

Alex:
I remember exactly the day when I discovered the tapes of my father’s collection. Tapes were recorded in a club in my town and my father was a friend of the owner. I started to listen to them and I was fascinated by those very particular sound, it was a mix of slow psychedelic funk and afro funk. Then I met up with the dj that played in the club in those years and I discovered that it was their peculiarity to play the bside of the vinyls disco/ funk that turned at 45bpm to 33bpm. That sounds very close to the sound to which I am passionate, and that marked much my current style. Then my first Technics 1200 that I still use, the train travel to go and buy vinyls around the few stores that at times spread the music. Then came the moment of my first gig in one of the first “underground” party in town. I still remember the thrill in being able to make the people listen to my music selection, it was 1989!

Well, Circoloco: it happened one day during the Xmas holiday in 2002 when we met by a chance one of the owner of Circoloco and he told us about what they were just start doing in Ibiza at that time, and he asked for a mix cd. We then got a call from him asking if we were available to play few gigs that summer (2003). After the last gig we been asked to became resident at Circoloco. And the Magic happened…

Where is your home base? If someone were visiting there for the first time, what clubs and/or parties and/or restaurants would they want to check out?
We live in Barcelona, exactly in Alella, on the sea coast towards France. Alella Is a small town famous for the wine (is a DOP area) where you can taste a great glass of wine in different winery here around. Barcelona is the city that never sleep, full of good restaurants, among them we suggest: Bacaro, Xemei, Teresa Carles, Bar Brutal, to name a few. The club scene is very strong and offers a lot of musical choices and is also the town of some of the most important Musical Festivals, like Primavera Sound, Sonar, Mira etc.

What advice would you give to an aspiring producer?
In our opinion the best way to be a great music producer is only one: listen and research music in order to build a personal background (as big as you can). This is the way to create a proper style and so be “Original and Unique”.

What’s on the horizon for System Of Survival in 2016 and beyond?
Well, well, well… 2016 is the year of the release of our new album on Get Physical. The album is composed of 13 tracks and we have some great collaboration with very talented artists like: Orlando Voorn, Salvatore Stallone, Andrew Grant and Brian Cid, Vhelade, Bianca Di Cesare, Brandy Eve and DOS (Francesco Mami – Giampiero Fusco).

We just released a remix for a classic Chicago track of Dj Pierre (Let The Music Takes You High) and in august we will have out  another remix for El Mundo Y Satori, both on Get Physical. We are very excited also about our remix for the new single of Roisin Murphy, Ten Miles High. We will have a vinyl ep on the italian label Greentech which includes a remix by Boo Williams. And some release on our labels: Fventi and Qface which is only available on Bandcamp.

In terms of gigs we are very happy about our monthly party “Soundscape” at Macarena (Barcelona), you can also find us this summer at Circoloco, and more other gigs around the world. Our Radio show “Soundscape” on Radio Ibiza Sonica every Thursday is going very good.

Do you have any hobbies outside of music?
Yes of Course! We love to go out with our skateboards when we are free, we doing swim training and we like to experiment vegan recipes. Pietro paints and creates sculptures with recycled materials. I like Photography. We both like to collect Star Wars stuff as well.

What are some touristy things you do while playing in a foreign city?
Usually we don’t like to do tourist things when go around. We are lucky to have a lot of friends around the world and they bring us to the cool places and first of all to the best vegan restaurant in town (lol). Of course we take information if there is any interesting exhibitions or event that happen in the city we visit.

Dream gig…
Set up a dj booth in the Baywatch lifeguard house in the middle of the Venice Beach (LA) with huge sound system and playing all day long.

Name one of your go-to tracks…
These 2 are always with us in our bags ready to spin in the right place and for a special moment:

Tell us about your mix…
Our mix is a journey through the musical genres that we love. So: dirty techno, Hypnotic funk with some “spicy” vocal tracks, just as we like. Also you can listen two tracks from the upcoming album on Get Physical.

Drink of choice…
Pietro: Like a straight edge and vegan “Bad Boy” I only drink flat water or “Real” organic smoothies (Apple a Day in Miami is my favourite place for smoothies)

Alex: I like Russian Vodka and when I found a good bartender I always ask for a Vodkatini (Pravda Bar in Milan is my favourite place).