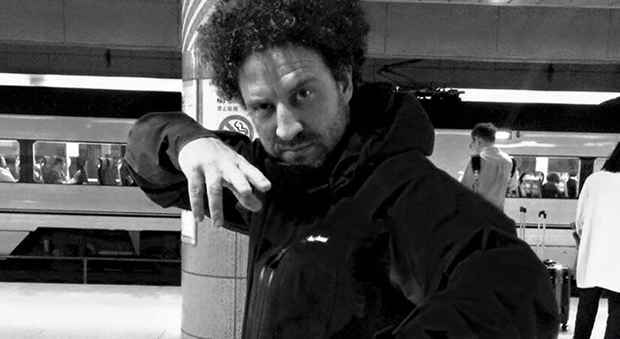 Danny Ward aka Dubble D aka Moodymanc‘s roots lie as a jazz percussionist but his heart is synced to the beat of house music.

Bred in MANChester, Moodymanc has linked up with many like-minded house-heads the past three decades in the city’s abundant scene; including 2020 Vision’s Ralph Lawson during the mid-90’s, whom Danny formed the band 2020 soundsystem with.

Moodymanc’s productions have landed on many prolific labels: Tsuba, Local Talk, Exploited, Neurotraxx, and of course 2020 Vision. Danny’s latest track, “Where’s the Story?”, will be included on a forthcoming 12″ on Nicetrax. Besides releasing music for others’ catalogues, Moodymanc runs his own label called Well Cut Records.

In short, Moodymanc is bad boy, and we’re proud to add him onto the Lovecast roster!

Check out his mix and learn more about Danny in the interview below.

How did you get into underground house music?
I was a teenager in the mid 80s and out clubbing in Manchester so was around as it started to appear more and more in the clubs (and subsequently blew up) so I got the bug with it then, as with a lot of other dance music, but in the late nineties and early noughties particularly I really started to find and hear more and more underground House records that really excited and inspired me.

What has been the most exciting turning point of your musical career to date?
Perhaps in terms of House music, probably touring in America with 2020 soundsystem between 2008-2010. Not so much just the gigs we were doing but some of the other clubs and parties that I checked out. All of a sudden it all clicked, especially with New York City and Chicago for me: It all made sense as places which connected all the music that had been inspiring me up to then. I decided that I wanted to make some freaky music for freaky people at freaky parties!

How did you first link up with Ralph Lawson to create the 2020 legacy?
I met Ralph when I started to play percussion at Back to Basics in Leeds in the mid nineties. He shone out right from the first time I heard him and we had a great vibe playing together. It’s hard to overstate what an influence Ralph has been. I started to record and produce a lot of loops and grooves around that time and contributed to some of the earlier 2020 releases, then as I started to write more music it was a natural and great place to put music out. I had also been working with Grand Central Records in Manchester, helping re-create some of their records live and started to talk to Ralph about that as a concept for 2020 Vision: a live show with which we could really represent the whole sound and concept of the label. When Juli and Fernando of Silver City came over from Argentina and we realized that they played keyboards and bass respectively it all fell into place. We were very lucky to play so many great gigs and have so much fun with it for such a long time.

What city do you call home? If we were visiting your hometown, what clubs and/or parties and/or restaurants would we want to check out?
I am indeed a ‘Manc’. Manchester is my home. If you were visiting here it’d be great to check out some of the newer clubs; Mantra, Hidden, Aatma-then there’s the more obvious ones too but also some of the more Underground parties that are going on that shift location can be the best fun too, there’s also a lot of great live music going on here of all sorts of genres, and some of the best DJing I hear that goes on in my mates’ house parties. It’s a great city for food too. People are passionate about it here, and we have a very diverse population and so are lucky to have a lot on offer from all over the world. But I definitely take you for Curry, Jamaican, Spanish and Korean for starters then we could do some of the newer and smaller restaurants then…. When do we start?

What is the best part about music today compared to when you started out?
Definitely its accessibility. The internet has become such a huge resource not just for finding new music but also for studying the ways it can be made, and the advances and affordability of the technology and software available continue to revolutionize. It’s also brilliant that the backlash of that at the moment is that people are looking at ways of doing things differently too-there’s a lot of interest in ‘older’ technology; analogue circuitry, ‘vintage’ processing and instruments. I think a lot of people are trying to add some sort of added personal ‘value’ and investment. They are generally pushing the envelope in all sorts of ways. I really like that.

What’s on the horizon for Moodymanc the remainder of 2016 and beyond?
I’ve consciously slowed down a little recently with releases but have a few things in the pipeline. It’s so hard to be specific these days because of the delays that seem inherent with vinyl production but upcoming I have a 12” on Nicetrax, which I’m sharing with Jcub and Lil’Mark (my side is actually the second track of my Lovecast, “Where’s the Story?”); a 12” coming on an underground Spanish Label, Petit Morte Musique with some heavyweight remixers-Javi Bora and Cesar Merveille; and a 12” with Gertenhaus with a stunning remix by Kevin Over. I’ve been remixing for Alex Ferrer at Deeplomatic and for William Welt’s new label too and despite having slowed down with releases have been writing a great deal of music which is currently ‘stockpiling’ as I decide what to do with it all…watch this space.  I’ve really been focused a great deal on DJing though. I’ve been finding tons of great new music and really working hard on trying to find ways that will let me showcase it in the most musical way I can. I’ve been lucky to have just been touring in Australia and Asia and have recently taken charge of my own bookings again so have been ‘hustling’ for gigs as much as I can, which I’m really enjoying – though it can be great if you have an agent looking after everything for you. However, there is something nice about dealing with people directly, after all it’s all about trying to make the best party that you can so if you can establish that right from the start with the way that you and a promoter are dealing with each other it generally makes for a more fun experience on every level. I have bookings for Manchester, London, Berlin, Madrid, Leeds, Birmingham, Ireland and more coming up. I’m looking into some long-haul touring later this year and into 2017 and am up for more if anybody out there’s interested!

Dream gig…
All my mates, great sound, lots of love in the air, nice weather… after that, wherever you like.

Dream collab…
I’ve been lucky to collaborate with some real heroes but one person I was trying to hook up with who unfortunately recently passed was the Brazilian artist Nana Vasconcelos-a great percussionist, vocalist and also composer and producer. He was and still is a huge influence.

Dream label…
Well it’s a cheap plug but I decided to set up my own, “Well Cut Records” to be my own dream label in terms of it being there so I could release my own music when I wanted and on my own terms….of course the reality isn’t that easy to achieve but I’d certainly like to dream that it might develop to that at some stage.

Hobbies outside of music…
I ski. A lot. I used to race slalom as a kid and have recently got right back into it over the last couple of years. I live not far from an indoor snow slope so train all year round 3-4 mornings a week-it’s good for my head.  After that, stamp collecting, drinking and eating, train spotting and ranting about stuff on social media, you know, the usual DJ stuff.

What touristy activities do you like doing when visiting a foreign city?
Definitely eating. I’m lucky to travel lots to different places but it’s usually for such a short amount of time that I’ve found that the best way to experience it is to eat the most authentic food you can. Probably ‘street’ food, that way you get to people watch more as you do it. I love it. In Japan they started to call me ‘Foodymanc’

Name one track that has been working well on the dance floors for you…
There’s a track towards the end of my Lovecast, ‘Allenby’ by the Audio Junkies on Sincopat whch has been DESTROYING people since I got it at the start of this year.  It’s a monstrously fat sounding arpeggiating across the bar synth workout. It will be staying in the bag forever.

Tell us about your mix…
Well the only plan was to include the track for the Nicetrax release, “Where’s the Story?” It features a spoken word by Jeff Mills (can I have him for a collab too please?) in which he talks about the importance of trying to tell a story through electronic music which really resonated with me. “Where’s the fucking story?” is something that I often heard girlfriends in Manchester ask too when dissing DJs who would be playing in too linear a fashion for them. (Gotta be able to mix it up for the Mancs!).  That really set the tone for the mix though. I was thinking about playing tunes that might do that. For me the best producers are the people who are joining all the musical dots for me and often with routes that I hadn’t or wouldn’t have considered before. That’s what inspires me and what I definitely aspire towards…. one day perhaps…? I recorded two mixes-one in the afternoon, then one about 3am…. Though I got a lot of stuff I wanted to in on the afternoon session it was of course the 3am mix that felt most natural and had the better vibe.

Drink of choice…
You’re getting’ em in? The BIGGEST of course! Cheers!