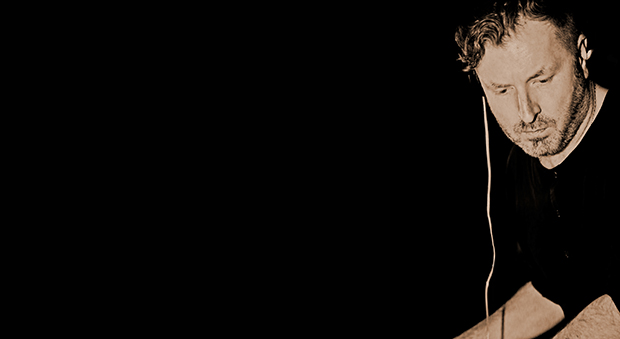 Between running two record labels, Freerange and Delusions Of Grandeur; being in the studio producing original music and remixes for numerous prominent labels–aside from his own–such as Systematic, Tsuba, Diynamic, Suol, Saved, and 20/20 Vision; touring the world, having recently played gigs in Romania, Russia, Brazil, Singapore, Indonesia, and all over the U.S and Europe; being a husband and father of two; Jimspter found the time to whip up a mix for us. Honored to say the least!

Enjoy these jams the almighty Jimpster has prepared and learn more about the house music veteran in the interview below.

How did you first get introduced to house music? What inspired you to turn your obsession into a career?
I first got introduced to house music through a couple of music obsessive friends who happened to have contacts at record labels, they used to get hold of some amazing stuff.  This was around ’87 and ’88 and at the time it was mainly releases on Mute and On-U sound so not house music, more experimental electronics, dub, and some industrial and new beat.  But later, the same guys were throwing squat parties in London and started DJing and collecting records, which was how I first came to hear a lot of the early Strictly Rhythm and Nu Groove releases at their parties and on the mixtapes they’d make.  As influential as these were it was actually a few specific tracks that I’d say were the big ones for me; Renegade Soundwave’s “Space Gladiator”, 808 State’s “Cubik”, DHS’ “House Of God” and Quasar’s “Seven Stars”.  These were the first house and techno records I bought.  Then as the rave scene in the early 90’s really started to boom I had a few releases on UK label Jumpin’ & Pumpin’ (also the label of Future Sound Of London), which is when I decided to focus all my time and energy on making music.

How does it feel to have been running Freerange for 20 years? What are some key elements to endure the test of time and adapt to technology when it comes to operating a record label?
It feels great to still be around after 20 years as there have been a lot of challenges along the way.  3 different distributors have gone bankrupt on us, the digital revolution in music also making things harder in some ways.  My partner Tom has made some excellent decisions along the way such as not having P & D deals with the distributors, which has protected us when they’ve gone down and enabled us to continue operating.  There was a period about 5 years ago when we couldn’t see a way to keep making vinyl and was digital only for a year or so.  It felt like we were losing our identity a bit and getting lost in the quagmire of digital labels so we had to bite the bullet and start up with the vinyl again.

What’s the process like determining what music to release on Freerange and Delusions Of Grandeur?
There’s definitely a difference in vibe between the two labels.  It’s a combination of the music itself, the background and style of the producers, other labels they’ve worked with etc.  It’s an instinctive thing I guess but I’m happy to say that although the two labels fan bases seem to overlap, there are also very distinct audiences and territories where each label appeals.  Freerange is very strong in South Africa and the US for example as I guess you’d say it usually on more of a classic deep house tip whereas Delusions Of Grandeur is generally coming from more of a disco-influenced perspective.

What city do you call home? How does where you live influence your music? If we were visiting your hometown, what clubs and/or parties would we want to check out? What about restaurants?
I live in a very small village in the county of Essex in the UK.  It’s about 40 minutes drive to London but only 10 minutes to Stansted Airport which is where I fly from most weekends.  I’ve lived in London and also Manchester but gravitated back to where I grew up once we had kids.  Our Freerange HQ is in Hackney so I’m there at least once a week but I don’t go out clubbing in London that often unless I’m playing somewhere.  We do hangout a bit in Hackney Wick which is the regenerated industrial area of east London and has a lot of good bars, restaurants and loft/warehouse spots which often have club nights on.  My wife actually has her own restaurant which she runs with her mum in a city called Chelmsford which is 20 minutes from our home.   We’re quite often over there and I’ve even DJ’d there a couple of times recently.

What’s the secret to balancing home-life and tour-life?
If you find out let me know, please!

What’s on the horizon for Jimpster, Freerange, and Delusions Of Grandeur in 2016 and beyond?
I’ve just finished remixing Mr V’s “Something With Jazz” for Razor n Tape, which should be out after summer.  I’ve also got a Jimpster edit of Galcher Lustwerk about to drop on Tsuba.  My track called “Eel Pie Island” is getting released with remixes from Adam Port and Hyenah in May on Systematic; and I’ve also got a couple of new original tracks, one which is a collaboration with Luv Jam, coming on the 20 Years Of Freerange 5 vinyl boxset coming in June.  I’m about half way through a new Jimpster LP which is shaping up nicely and see’s me going back to my roots a bit with a jazzier, downtempo and ambient approach.  The labels both have really full schedules with our 50th Delusions release just out and killer EP’s about to drop from Hyenah, Clavis and Red D from FCL.

Dream gig…
Just give me a nice sound system in a small dark room, simple but effective lighting operated by a good lighting engineer but most importantly an energetic and open-minded crowd who are there for the music.

Dream collab…
It’s hard to think of working with a ‘legend’ or major influence that you wouldn’t be so in awe of that it would be impossible to get anything done!  As a keyboard player I’m often bored of my own chords and chops so I love the idea of working with someone like Robert Glasper who would kill me with his incredible skills and deep musicality.

Name one track that gives you goosebumps every time…
Depends a bit on where and when I’m playing something but Christopher Rau’s “Simple Setup” had me crying quietly to myself at various gigs the last couple of years.

Tell us about your mix…
I thought I’d make a mix which was a bit more uptempo than my mixes often are.  Not more banging but just up in the 125-128bpm range which felt vibey in the studio when I did it.  Got a forthcoming Freerange release from Red D in there but other than that and a track from the new Stimming LP it’s all older bits and bobs from within the last 3 or 4 years.

Drink of choice…
Just water of course!  My body is a temple.  I wish….