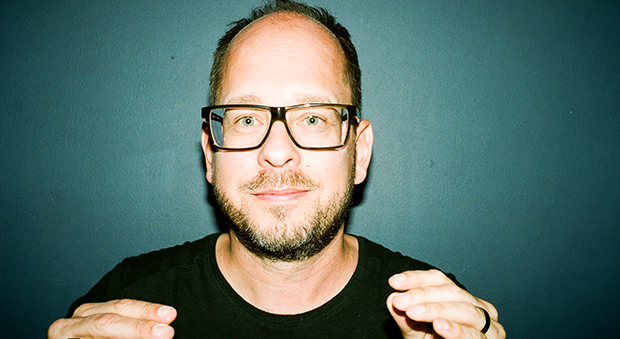 Starting in the early 1990’s, Oliver worked tirelessly on DJing, his productions, and running numerous record labels; but in 2008 Oliver hit a major turning point in his career when he found himself in the collaborative arms of Dubfire–producing a series of EPs with the techno legend.

Oliver Huntemann’s latest label project, Senso Sounds, which launched in 2014, has released an onslaught of heavy tunes from Andreas Henneberg, dubspeeka, Florian Gasperini, and a handful of EPs from Oliver himself.

Today you can find Oliver traveling the world playing at all the major clubs and peak time slots in the festival circuit. We’re astounded to host an exclusive mix from this iconic figure in the underground dance music circle.

Learn more about Oliver Huntemann in the interview below.

How did you first get introduced to underground dance music? What inspired you to transform an obsession into a career?
I was fourteen when Break Dance hit Germany and it immediately infected me. We were a small group of boys who were dancing in the streets every day, trying to be like the Rock Steady Crew or the New York City Breakers. I loved this new music called Electro Funk and was inspired by ​Afrika Bambaataa, Shannon, Hashim, Egyptian Lover and Arthur Baker. I remember the exciting feeling of going to the record store with the hope that a new import of records from US had arrived. My fingers were​ itching when I’ve pulled​ the vinyl out of the sleeve; I ​couldn’t wait to get the needle and my headphones on. Once I bought some records I went home and listened to ​them up and down until I knew every beat by heart. I could not let that passion go and I turned it to a career, which is easier to say than to do, but for some it does work out. I’m really grateful about it.

What motivated you to start up Senso Sounds? What do you think is the key element to building and maintaining a successful brand?
I simply felt the need to begin something new. I guess one of the key elements is passion for everything you do in life. You just got to want to make it work. You need to wake up and love driving your profession. A job is different.

What’s the scene like in Hamburg right now? How has the city influenced the artist you’ve become?
Hamburg has a stable music scene. More Indie and Rock but also a lot of Techno and Electronic Music. Solomun and the Diynamic crew, for example, are based in Hamburg. The nordic folk is very loyal. We don’t follow that much trends or booms. The “place to be” venues are changing and clubs re-open under a new name and with a new design but the amount of constant electronic music venues stay more or less the same. Also we have a strong open-air scene and many temporary projects, which keep a constant change and movement. It‘s probably less the scene, but more the mentality that inspires me. I’m simply nordisch in a way.

What do you think is the most important aspect to the business side of music? What’s the future look like in terms of selling music?
Selling music was never the element that drove me. Sure, it’s important but not my intention and not a secret that it doesn’t pay the bills anymore, unless you are a “​superstar”. Playing dj sets is way more important and fun to me. Seeing how my music influences the people and spinning my own songs, watching the crowd lift up, is an other level of energy than selling x amount of​ copies. I guess the future is so to say “on demand”.

What’s on the horizon for Oliver Huntemann and Senso Sounds in 2016 and beyond?
The focus at the moment is to finish my new album. I’m still experimenting with sounds and collecting ideas but it seems I’m on a good way. Beside that, my collab with Dubfire continues. We have finished our new single “Humano” which comes out in the ​summer, and in the second half of the year we are supposed to release a big retrospective package including some unreleased remixes. On Senso we have just sent out the promo copies of the upcoming dubspeeka release called “Drone”, another huge single from this outstanding artist.

Dream collab…
Unfortunately not possible as Johnny Cash’s voice got buried together with him.

Name one track that has been lighting up dance floors for you…
The H.O.S.H. remix of André Winters Track “10:30” is still blowing my mind.

Tell us about your mix…
I hope it tells its story itself. Just listen, enjoy and maybe be surprised here and there.

Drink of choice…
Vodka and water