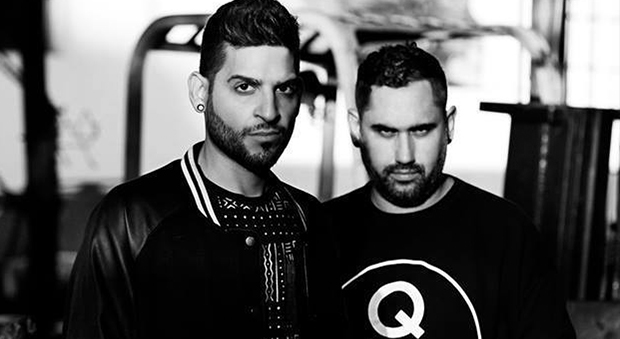 Ominous by definition is to give the impression that something bad or unpleasant is going to happen. The term used for threatening or inauspicious. However, when the duo comprised of Jonny Cruz & Ricardo Dominguez come together, the music they create is nothing close to ominous. Instead, the two showcase a soundscape of emotionally driven melodies and vocals showing a side of their musical creativity neither has been able to fulfill until now, a live set.

The two are longtime friends from their birthplace of San Juan, Puerto Rico. Growing up the two shared a mutual affinity for music, technology, and production. Only recently the they have began to work together in the studio and their collaboration ended up being the stepping stone in the formation in the partnership now known as Ominous.

Their live act encompasses an electronic yet soulful journey of tasteful electronica with hints of Rock & Roll. With upcoming releases on multiple recognized labels including Motek, Touch of Class, & Culprit LA, Ominous is sure to become a recognizable name in 2015.

We love the new project. Can you tell us how you two met and what drove you to make music together?
We met through mutual friends in our birth country of Puerto Rico a few years back and we instantly connected on many levels including musically.The final decision to come together (which we had spoken about many times) actually came in November of 2014. And we haven’t stopped since.

Totally digging the new live act as well? Can you tell us a little about your new set up and what playing “Live” means to you?
Our setup at the moment consists of Ricardo on Guitars, Keys and backup vocals, and Jonny is on keys, vocals and live drum sampling/programming, this dynamic really works for us in our performances. And as for playing “live” what it means is just that, its actually playing our tracks but with the live element which will always sound different to the last time.

What is your preferred method of production?
We work in ableton 9 our “method” per say isn’t always the same, so there really is no method, sometimes we will start jamming with analogue gear and start randomly recording or sometimes we will write a vocal lyric and work from that, or sometimes we just go the normal way and start a nice drum loop and go from there, depends on how we’re feeling that day.

What is your favorite hardware and software that you are using at the moment?
Juno 106, Dave Smith Mopho x4, 808, Native Instruments Komplete 10.

You just recently relocated to Berlin. Can you tell us a little about your move and what drove you to migrate to this great city?
Well first of all we think its a very inspiring city to be in, just being in Berlin brings a creative attitude naturally.And also you are constantly influenced by the music, the art, and general surroundings.

If you had any advice for anyone going to Berlin, what would it be?
Try not to party too much, and make good use of your time.

What can we expect from Ominous in the coming months?
Our next release is a track we did with singer Michelle Uziel called “Poison Rush” for the upcoming Indian Summer volume 2 on Touch of Class Records also our album will come out on Touch Of Class in January/February 2016, we will be on tour this coming December in the US and South America which will end up in Tulum & Playa del Carmen for BPM. Also remixes on Inyan Music, Faceless Recordings, Magnetic Moon, Clouds Above & Motek. Forthcoming releases on Cityfox, Get Physical and Moon Harbour for next year.

When you guys are not producing music, what are you doing?
Literally sleeping & watching movies. & the occasional dance break.

Can you tell us a little about this mix?
We wanted to do something a little different so we chose a few weird tracks to put together and blend them and pretty much see what happens, it was sort of an experiment, and it ended up being cool in the end (we hope).