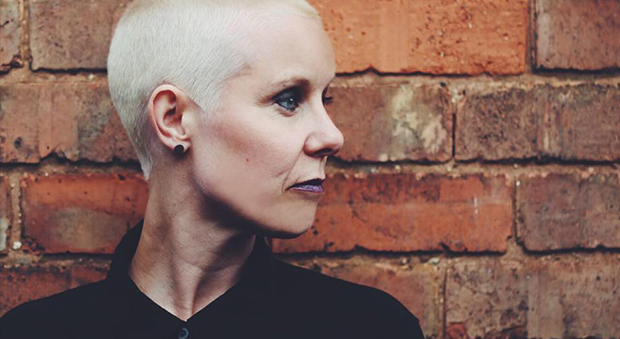 If you’re into house and techno as much as we are and you haven’t heard of Just Her, then you, my friend, have been living under the proverbial rock.

Claire Spooner is a hustler like none other. As one-half of Him_self_Her, the Leicester-based duo that has released original music on Crosstown Rebels and Suara in recent years, Claire set off on a path to prove to Her_self, and the world, that she can build a flourishing solo career and see a life-long dream into fruition–running her own record label.

Claire’s pursuit is developing admirably. Just Her released an EP, ‘Flatline,’ for the eminent label Suara and a second EP, ‘Silence,’ for Her own newly launched record label Constant Circles, which features remixes from Raxon and Pete Oak. More EP action on the way from Just Her on Stil vor Talent and Save Us Records, and even more in the works for Constant Circles.

On top of Claire’s busy production schedule and conducting a long list of perpetual label operations: Just Her is playing gigs all over the Western Hemisphere, including ADE in October; hosting a weekly radio show on Bloop London; teaching Music Technology classes to young, talented and aspiring musicians; and delving into the compassionate world of philanthropy–recently shaving her head for charity.

There’s no doubt that Just Her will soon be a household name on bills worldwide, and inducted into the upper echelon of independent house and techno producers. In the meantime we welcome Her to our beloved Lovecast roster. Enjoy!

* PLAY HERE is you do not see the SoundCloud player.

Interview with Just Her

You recently shaved your head for charity and we applaud you! Can you tell us more about the charity? Why did you choose shaving your head as the stimulus to raise funds? What has been the greatest challenge during this experience? Have you always been a compassionate person?
Thank you! The story behind this was that a previous music student of mine called Tasha had lost her sight beating a brain tumour and was a bit of an inspiration to me with her attitude towards life and her studies. I recently heard news from her family that she had been diagnosed with a second tumour and was starting chemo all over again. Tasha is an ambassador for the Brain Tumour Charity and they have supported her directly throughout her journey. I really wanted to help raise money and awareness and I thought shaving my head was a great gesture – not just because my hair is the main part of my identity as an artist, but also to acknowledge what many people have to go through in losing their hair as part of the treatment.

The biggest challenge has been hitting my target – it was actually more difficult than I thought to get people to donate. I have over 30,000 followers across all my socials so I figured raising £2000 would be pretty easy but I’m still not there yet. You can still read the full story and make a DONATION HERE.

I would like to say I have always been compassionate but I guess I switch off from things and get on with my life as most people do. Sometimes it can take someone like Tasha to come into your life and remind you of what’s really important. But as I’ve got older I’ve definitely realised the importance of compassion and gratitude, and I do my best to spread those vibes as best I can!

Your recently launched label Constant Circles is off to the races! How did the label fixate itself on your to-do list? What forthcoming releases can you tell us about? What is the single most important aspect of managing a record label?
Running my own label has been in my mind since I started making music 10 years ago, but I really wanted to wait until the right time to do it, once I had gained enough experience, contacts and so on. And yes, it has got off to an amazing start, thank you! We had support on release 1 from the likes of Maya Jane Coles, Sasha, Digitaria, Dr Dru and loads of others, so better than I ever expected really.

The next release comes out in September and is a huge track by Kris Davis and Yost called Relentless, that has already gained support on Radio 1 from B-Traits, with a killer remix from Martin Roth, and a super creative deep rework from Martin Vidal. After that we have an EP from one of my favourite producers, Joal, with a remix from David Durango, followed by some beautiful electronica from Allies for Everyone, remixed by Matt Hardinge and Rafael Cerato & The White Shadow. I will be releasing more music from myself too, with an album in the pipeline for next year.

I’m hoping for this to be more than just a label though. Each release comes with a custom piece of art by my designer Martin Vidal, which will be available as t-shirts and prints, and in the long term the idea is to develop it into a brand covering music, art, fashion and education.

There are so many labels out there now, I think it’s really important to have a concept that makes you unique, and also sign the music that’s true to you and not go with trends.

You seem to be focusing most of your energy on your solo project and label—is Him_Self_Her on hold at the moment? What’s on the plate for Just Her the remainder of 2015?
At the moment it is, yes. If you are going to launch a successful solo project and label it’s obviously vital to give it your full energy, and it has definitely been more than a full time job for the last few months! There were also a lot of assumptions that I didn’t write or produce the music for Him_Self_Her, because I’m female, so I have an extra point to prove with my Just Her material.

I have lots in the pipeline for Just Her for the rest of the year, including a release on the incredible Stil Vor Talent, an EP on Save Us Records, remixes on Comport, Motek and Blindfold Recordings and gigs in Northern Ireland, London, Egypt and Belgium, plus a performance at ADE in October.

Dream gig…
It has always been my dream to play on the main terrace at Space and DC10 in Ibiza. I have played a lot on the island over the years but never at those venues yet. Hopefully I’m getting to a point now where this might just happen in the near future! But I’m also aiming for some major festivals and a USA tour (to visit you guys of course!) next year, which will be more of my DJ goals ticked off.

Name one track that has been poppin’ off in your dj sets…
Terranova – Twisted (Dub) that has been going off in every set lately, as it’s got a really cool driving tech house vibe to it.

Tell us about your mix…
As always with mixes I wanted to start out a little deeper and then go on a bit of a journey towards more driving techno. There are a couple of my own tracks in there including Raxon’s amazing remix of my track silence that is out now on Constant Circles. I always like to end with a really emotional track and Weval’s remix is a beautiful finale. I hope you enjoy it!

Drink of choice…
Well I don’t really drink alcohol these days but I am an absolute coffee addict. In fact I might have to add it to my rider!