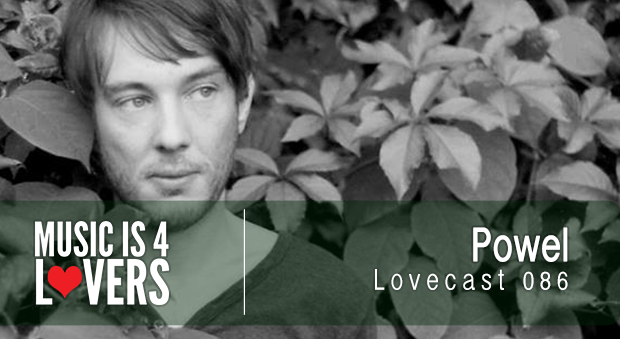 Berlin based Deep House DJ and producer POWEL is the author of stellar remixes and productions of incredible musicality. His signature rhythms, percussion work and captivating atmospheres have that amazing ability to take you into the depth of aural pleasure.

Growing up in the outskirts his musical journey began in his early days as he played in several bands since he was 14 years old. Today his music spans from projects such as the post rock ensemble “Well done, Jackson Pollock”, the indie band “The Mouse Folk” to his DJing and producing efforts.

After releasing some remixes and the track “Perelin, der Nachtwald” on a split EP compiled by the also Berlin based label Keller, his first own EP “Shake The Birds Of The Tree” was released on Wunderbar Recordings on February 25th last year.
In the summer of 2012, Powel founded the project LAKE POWEL together with his friend and colleague LAKE PEOPLE and their first release called “Bright Eyes, Dirty Hair” came out on Fenou last autumn.

With his following master piece, the “Cloud City EP”, out last September, POWEL joins the roster of UK based Fina Records, well and truly putting him on the map, and slotting in alongside MOVE D, COTTAM and LEIF.

POWEL’s deep and warm sound finds admirers all over the globe, so 2014 started out with his latest release on Egoplanet (FR) as well as various gigs in Europe (i.e. SONAR Barcelona) – more mind-blowing releases and his second US/Canada tour in autumn are yet to come.

Recently POWEL has been getting together with reknown DJs and producers MATTHEW DEKAY and LEE BURRIDGE to release on Dekay’s new found Berlin based label Für Die Liebe alongside artists such as KJOFOL und YOKOO and moreover to work with Burridge on productions and releases for his New York based label All Day I Dream.

The quality of your productions is impressively consistent. What do you attribute this steady flow of great music to? Do you have any pre [or post] studio rituals?

Thanks! For the past few years, I had my studio in my bedroom. Most of the time I immediately started making music after my first coffee. That’s not much of a ritual, but recently I moved my stuff to a proper studio of some friends of mine – so maybe I’ll develop new rituals here during the next few months. Unfortunately I haven’t found the time to set my stuff up yet but I’m curious to find out what that new room will do to me and my music. Also I think this step was overdue, because it can be very annoying if the place where you live and where you work is the same. It’s hard for me to find an end when I’m working on tracks. Up to the point where I would only make music and sleep, with hardly any social contacts during the week and very unhealthy nutrition. So I hope that’s gonna change. ☺

What is your preferred method of production?

Being sober and undistracted. I don’t know why, but even after just one glass of wine I’m unable to work on music. I always end up skipping through older projects and making lists, which of them might be worth working on again. I got hundreds of these lists, but never take a second look at them, because once I’m actually working on music I mostly wanna create something completely new.
Also I prefer a quiet surrounding which is why I often work nights with no or less noises from the street or my flatmates doing something in the kitchen (my bedroom-studio was right next door). On the other hand when they wanted to sleep, I was the one making „noise“. What a vicious circle.

What’s your go-to instrument in the studio?

I think the instrument I’m using the most is a nord lead. It got a very unique and warm sound. I also like to develope ideas on my piano but don’t use it that often in my productions. But in the end I don’t have “the one” instrument. There are so many possibilities and sometimes it’s very hard to choose, so I try to limit the instruments (the digital ones) I use just a few, and after a certain amount of time I change them to completely different ones. Sometimes it’s hard to leave your habits, but it’s worth it.

Where’s home base for you? What’s the scene like there? Does the scene where you live help inspire your music?

I’ve been living in Berlin for more than 10 years now, so I think it’s cool to call it my home base.A lot has been written and talked about Berlin. I think most people have a very good image of the city and it’s scene. But in the end a scene is what you make of it. You have your friends, your preferred clubs and other spots and so everyone seems to have their own interpretation of the scene. I think they are similar but not exactly the same. And of course my life here has an effect on me and my music. In the end all I’m doing music wise is a product of my environment and experiences.

What projects do you have in the works?

I just received the masters for my upcoming EP on All Day I Dream, the release is planned for this summer.
Now I plan on focusing on new material. I want to experiment a bit. Trying to discover new ways of production and creating music, just to avoid getting into some sort of routine. Because I think it’s the routine that can kill your own creativity, and that’s the last thing I want to happen to me.

More music, more mixes and shows. And most importantly, I’m going to start working on creating a live set, which is not very easy for me, because I’m working a lot with logic, and that’s not a sequencing software you can do live shows with. So I have to transfer all the material into ableton live, and that’s gonna be a lot of work. But it’ll be a great step for me and my music and my plan is to have it ready by the end of this year!

Who are some of your musical influences?

There are quite a lot of them. I think in the electronic music scene, one name would be Pantha Du Prince. His „This Bliss“ album had a huge impact on me. But there are also bands like Múm, Sigur Ros or Dakota Suite, which are creating a very overwhelming atmosphere. One that I’d also like to capture in my own tracks.

What’s your go-to track at the moment?

This time I didn’t make a concept mix. I tried to make it a bit more intuitive than usual, like when I play in clubs, but with softer music.