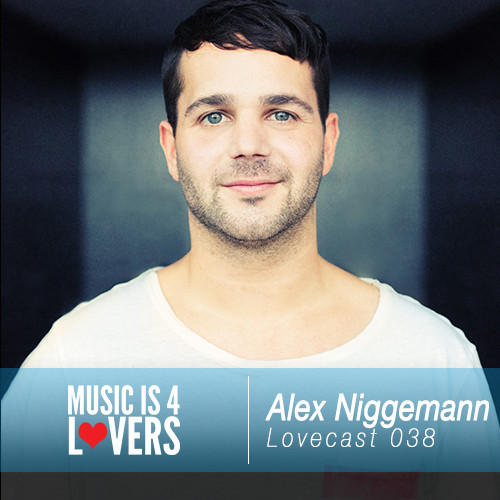 From classical piano to hip hop, German DJ, producer and label head Alex Niggemann was led into the eye of the techno storm at 15.  His persistent, headstrong and perfectionist tendencies worked to his advantage in a bustling industry where perseverance is key, starting out working for influential artist DJ T and charting on labels such as Get Physical, Supernature and 8bit before introducing his own Soulfooled endeavor in summer of 2010.  Always one to forge a unique path, Niggemann traveled the world with his engrossing sets and made a great name for himself, evolving through his sound and deciding to begin AEON in April 2013, a new imprint based in the roots of Chicago, Detroit and 90s house influences.

Our newest Lovecast comes from the man himself and takes you through a dark, mysterious flow that is soaked with intensity and stylistically built, leaving you wanting more.  We get to know him a little better in this interview and hear he will be out in San Diego this May for a ‘Spanking’ at Thruster’s, so press play and see what this influential artist is all about <3

1. You have been living in Berlin for quite some time now, a city known to creatively inspire artists working with many different mediums. Do you feel like you are continuing to grow musically there, or do you envision yourself living somewhere else either soon or in the future?

Yes, I still do. Berlin is such a inspiring city, because of so many creative people living here. But I think it’s a mixture of getting inspiration from touring the world, getting to know different cultures and coming back home to Berlin. The good thing about Berlin is, that the whole world comes here and brings music and love to this city. It seems like all the different influences and experiences, also other people got/made, are being transformed a little bit and combined. I love to stay in Berlin when I’m not touring and go out here. I have never been that inspired and creative before I moved here 9 years ago.

And yes, I definitely see myself somewhere else when I getting old and have a family. I don’t wanna be the bourgeois grand-pa between all these young folks at some point. You know, I love to relax and being chilled… but it’s almost impossible in Berlin.
2. What were some of your highlights of 2013 and what are you most looking forward to in 2014?

2013 was a very good year in general. The highlights are difficult to point out, as I didn’t get time to rest and think about it so far. Time passes very quick and the world continues turning. All the festivals I did, Ibiza season and also my tours to Asia, Australia, Africa and North America were really lovely. I don’t mean gigs only- I really enjoy meeting people who show me around, and I don’t mean being tourist guides… I love seeing the way people live in different countries and cultures. I always wanna expire the real life. I can watch sights when I’m old.

3. In your biography, it mentions a lot about your impulsive, erratic characteristics. Do you feel a bit more grounded as your sound and style mature and you experience more both personally and professionally?
Haha, yeah that’s a lot of fancy words. The best example is that I’m never satisfied with my own music. I can work on a track for 2 months and I will always find out something that can be improved. The problem with being a perfectionist and self-critical is that it becomes hard to deliver. I didn’t want to release my first track, so somebody basically sent it to a label behind my back and it turned out that people liked it. I’m really tough towards myself and I always have a hard time being satisfied with my own work. Regarding my impulsiveness, it shows up when I’m doing business. I want to get the work done straight and I can hardly wait. Same goes with my team-mates or the artists and club managers I’m working with. You know, my family comes from the middle-class; my father was self-employed and he transmitted these values: honesty and quality-in time-work are two of them. If I want to target a certain quality, I won’t compromise.
But yes, I became more grounded with the time due to the experience I did throughout the years. I especially became more relaxed and don’t try to force things to much anymore. But I guess, I’m still impulsive and erratic.
4. Are there any new artists or sounds that are truly piquing your interest lately?

Yes, there are a lot. Actually that’s the main reason why I have my both labels soulfooled and AEON. I wanna give talented artists a platform to show their skills to a brighter audience by using my name to get them a bit more attention, which they usually wouldn’t get in this jungle of electronic music at the moment. Young guns like Qbeck, Andrea di Rocco, Francys, Johannes Brecht, P.Lopez, Victor Stancov, Dodi Palese or even more known people like Show-B and David Durango are definitely peeps to have an eye on in 2014.

5. Looks like you have played some of the best clubs in the world to date. Any particular cities, festivals or spaces you dream of visiting (or returning to) in the future?

For some reason I haven’t been to Japan and Korea yet. I really wanna go there…not only because of the great food! *lol

I also wanna see a bit more of Africa. And for sure there are festivals like Movement and Exit, where I never took a “direct” part. Like being on the official line-ups. But I’m working on it

6. What are some of the most impressive record shops you have stopped at over the years?

Hard Wax is definitely the place to be, Rush hour in Amsterdam and a few more. I wish I had some more time to do record shopping in every city I visit

7. How did you go about compiling and mixing this Lovecast? (setting, sound, tech etc)

Usually I chose my favorite records of these days, which I also play out in clubs. But as you can’t play out every track, especially the deeper ones in clubs always, I really enjoyed mixing tunes which you might not hear from me in clubs.

Beat me, but as time is rare at the moment, I decided to mix them in Ableton, as this makes it easier to switch track listing. As I had a few records only on vinyl, I had to digitalize them before.

8. Drink of choice at the moment?