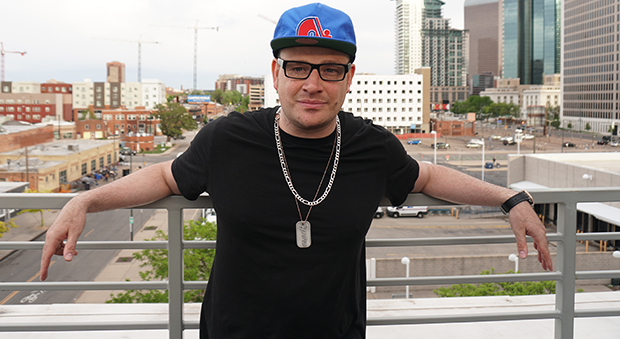 option4 keeps the funk flowin’ in this moody mix for our 184th Lovecast episode.

A jack of many trades out of Denver, Colorado, you can find option4’s tunes on Sweat It Out and Nervous Records; or working on his co-project with MANIK, 909 til Infinity; or throwing events with his team The Hundred; or touring all over the U.S; or conducting social experiments to give young producers a shot at a headlining gig.

We are thrilled at the opportunity to dig into option4’s world a bit and feature him on this new episode of the Lovecast! Enjoy!

Tracklist and Interview below…

How did you first get into underground dance music? Was there a specific moment of inspiration you can remember?
Oh…man…easily Daft Punk’s Homework was what changed the game for me. Da FUNK. Although obviously it’s not underground but back then it was. After that I was hooked on electronic music and never went back. I started actually caring about “underground” stuff however when I bought my first pair of turntables and frequented my local record store (Mole 33). It went out of business but that changed my life. I learned SO much about proper house music from that time period. Wouldn’t change it for the world. I was 18 years old and obsessed.

What has been the most exciting turning point of your career so far?
Well it was never really a career until a few years ago. I don’t consider anything a career until you’re actually paying your bills with it. I’ve had ups and downs because this game is hella tricky, but I would say I’ve been lucky enough to tour the states a bit the past couple of years and the turning point for me was definitely when I released, “Love Like No Other” on Nervous Records 3 years back.

Tell us about the things you have been working on…
Well… I guess I shouldn’t let this out of the bag? But I’ve decided to launch a proper record label. It’s going to be super daunting but…I just have too many friends making too much good music. It’s going to be fun to put others on.

What are some of the challenges about pursuing a career in music?
Well I think the biggest thing is just to get your music heard. It’s so difficult for independent artists now because of the downfall of SoundCloud. I also think that being honest with yourself and constantly evaluating your path is very important. Remaining an artist rather than following trends. It’s overwhelmingly important these days I feel and it can be a challenge when you see the success of others. MAKE MUSIC FOR THE RIGHT REASONS.

Who inspires you?
Musically? All my friends. All in different ways. I love Todd Edwards for his caring and honest personality. I love Doorly for his dope production and hard work ethic. I love Will Clarke because of his ability to interact with fans. I love Billy Kenny for his hair. I love Treasure Fingers for just being such a boss. I love Green Velvet because of his sincerity. I love Golf Clap because of how humble and hard they work. I could go on forever but.. I get inspiration by just admiring others. ALSO COFFEE.

Name your top 3 go-to tracks…
WOW. umm impossible? but.. I’d say.. “Trummor” by HNNY is one of my favorite tracks of the last couple years. So fun to play out. Also I’d have to say “Rammein” by Cascandy is gotta be up there for me. Love it more than anything.. and then for EMO purposes only.. “Divine” by Jamie Antonelli is like.. the greatest ending song of all time <3

Do you have any hobbies outside of music?
I DO play Hearthstone on my phone cuz I love dragons. I don’t really have any other hobbies than that at the moment because I’m boring and my whole life is work.

What is your dream gig?
I’d love one day to play in Iceland or Snowbombing. The idea of playing a dope festival surrounded by snow where I’m not sweating is like magic to my ears. Playing SnowGlobe a couple years ago was like.. the best EVER.

Tell us about your mix…
This mix is pretty groovy then moody then.. well.. more moody. But it’ll be nice to listen to when you’re driving around or while you’re working. Not really dancey per se but it came out pretty dope so I hope people enjoy listening

Favorite Drink?
STARTS WITH A T AND ENDS WITH A EQUILA