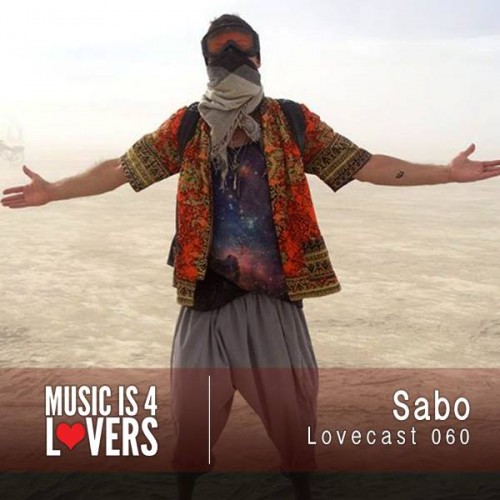 Fresh off the playa full of dusty dreams, magical energy, vibrant souls, and overflowing hearts, we bring you the perfect mix to get lost in lucid dreams from one of our favorite burners, Sabo. Having had his Robot Heart mix from 2013 on repeat since it first surfaced 4 months ago, we felt there no better artist to set the tone for burn anticipation. Having originally sent us this mix back in June, Sabo set out with this mix with the intention for it to carry you into the two month build to the land of fairytales and family. With it’s later release now, it’s ended up invoking a feeling of nostalgia and embodying that magic still through the most beautiful weaving and selection of songs that undoubtedly were heard and set the spell on the playa,  let the mix take you out of your mind and let the familiar tracks transport you )'(ome…

Favorite set of yours you played?

(most fun vibe at which camp) Robot Heart on Sunday night alongside my two old friends Nickodemus and Eduardo Castillo was amazing. Pile Palace with Desert Hearts‘ boys was super fun and vibey, but my favorite set just might be the impromptu back to back set I did with Berge (aka Goldcap) on Friday night at Panda Lounge Sky bar. We had never DJ’ed together before but it just flowed seamlessly and Acid Pauli (whom is a inspiration to both of us) told us that our set inspired him -so that was just incredible!

Favorite tracks to play this year?

so many to list but here’s a few that really made an impact in my sets:

New tracks you fell in love with?

Tracks you heard the most?

I thought I’d hear the new Ame “Turn Your Love Around” song a lot but actually never did lol. I did however, hear the David August “Epikur” song at least 5 times. Not mad though that song is beautiful and on my mix!

Favorite set(s) you stumbled upon?

(which DJs, which camps?) Best set I stumbled upon was on the Mayan Warrior art car, and it was a duo called Avanti from Mexico City. Mayan Warrior always seems to have amazing programming and the music is just funky and not super pretentious or “sceney” as some of the camps can get. Also Major Lazer & Skirllex played a classic reggae dance hall set the morning they burned the Embrace sculpture and this was such a nice breath of fresh air from all the numerous heavy EDM sets that were happening all week. I didn’t catch any of their other – more talked about sets from them- but in the morning with the sunrise, this was just perfect in my opinion.

Robot Heart, Mayan Warrior, Pile Palace, and Panda Lounge for me. There are so many incredible ones though and you just don’t have enough time to catch em all. I never made it to a bunch i wanted to check out…oh well. Also, I missed both my art car sets this year (sorry guys) because I just couldn’t find them, and spent like 3 hours looking!

I went to the Temple on Saturday and while in there, a full white out sand storm swept through and kept us inside for almost an hour. It was a really powerful emotional afternoon, but much needed after all the music chaos of the previous nights.

The Embrace sculpture was incredible, and inside it was a full on maze / museum with so many cool little nooks and crannies to explore, plus incredible views of the Playa from interesting angles. The way it was lit up inside reminded me of the blinds at Panorama Bar in Berlin, with just little slivers of sunlight poking through. There was an art car that looked like a huge ghost character from the Pac Man video game. At night when that was driving across the playa it literally looked like a giant sized video game it was so dope!!

Countless incredible moments to recall, but one that particularly sticks in my mind was Acid Pauli‘s sunrise set at Robot Heart on Sunday morning. At one point he slowed the tempo down to about 90 bpms from 120, and dropped an acoustic version of the Isley Brothers “Caravan of Love”. Not gonna lie I was crying with joy, it was so epic and such a beautiful moment that everyone felt in unison.