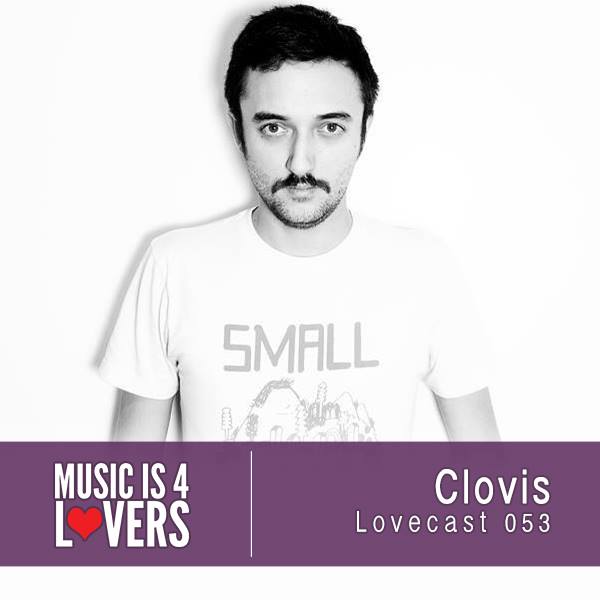 A Los Angeles native, Clovis is one of the foremost underground DJs to rise from the city within the past decade. His commitment to the avant-garde edges of house and techno have led him to dance music’s most forward-thinking hotspots: Berlin, Brussels, Bucharest, and more. As a DJ and producer, Clovis’s passions range far beyond the kick-drum, expanding into deep explorations of the tones, forms, and shapes of sound—the timbre of a woodblock, the rustle of a castanet, the snap of a snare. Yet he can deftly move a packed dance floor, delivering peak-time sets in which elements of dub and complex patterns shine through soulful, driving tech-house. A versatile selector, Clovis is as at home expanding minds at Berlin’s Club der Visionaire as he is moving bodies on Los Angeles’s Standard Rooftop.

The musical sophistication Clovis displays is due in no small part to his past. Of French and Japanese heritage, his father was a voracious collector of music, a true aficionado who introduced him to everything from Thelonious Monk to Philip Glass at a young age. After befriending the Droog collective in 2007, he found a group of like-minded individuals intent on bringing modern european house music to the west coast. Via their successful Culprit imprint they encouraged his first production work, while also having him as a resident at their series of parties. Clovis was able to hone his unique sound DJing alongside such respected influences as Magda, Matthew Dear, Three, and Jan Krueger, in addition to being an after-hours favorite.

In 2013 the desire to grow as an artist brought him to Berlin, where he spent the year exploring the city’s thriving scene and touring throughout Europe. Over months of memorable dates, a highlight was a spot at Romania’s Sunwaves. The back-story is pure magic: a chance encounter at the BPM festival turned an empty opening slot into a 4 hour back-to-back daytime session with Rhadoo. Together the two went on a musical journey through their influences—from Isolée to Fred P, the black and yellow Perlon days to the latest of [ar:pi:ar]. Five months later he was playing at the famed festival on the Black Sea coast alongside the best of the Romanian underground. 2014 sees Clovis back in California, hard at work on new music for Lessizmore and Moscow’s BodyParts.

A gentle soul and urban sophisticate, Clovis can be found wherever dance music isn’t just bass drops and breakdowns, but an art form deeply reflective of our modern times.

My dad was playing music in the house breakfast till bedtime pretty much every day. We still have most of his music collection of around 10,000 CDs in our family, I’ve been slowly pulling boxes here and there, looking for jazz treasures and fun things to sample or just listen and store in a lossless digital format. There wasn’t much interest in dance music in youth culture in the US around 2005 when I began to get into it. 18+ trance clubs and a few massive’s were the only options really. But music is a constant exploration and now thanks to the internet and the methods of delivery and information available to us it is easier to keep following the rabbit hole.

The scene in Los Angeles is rather underdeveloped when compared to most other places in Europe or cities like New York and Chicago. Despite a healthy underground warehouse party scene over the years, the music has failed to gain serious traction in more accessible venues. There’s hope we can improve things though, and there is definitely a much larger audience receptive to dance music in the US these days vs. a few years back.

You have spent some time abroad, playing and living in Berlin? Can you tell us a little about that experience and how it has shaped you as the musician you are today?>

Berlin is a place I needed to go to in order to have a better and deeper understanding of myself and my musical identity. I felt I had gone as far as Los Angeles would allow and this was the only way to progress and take my craft further. I think it worked, I feel just as comfortable playing in Los Angeles now as I do in Europe, but I understand the differences between the two which are pretty important.

Probably not really important at all really. You can build a studio and make music almost anywhere. I know people who have finished pretty good songs while on the airplane in their headphones. As far as getting exposed to inspiration, ideas, and other artists, with the internet you can pretty much do that anywhere as well. One thing you can’t get from the internet is seeing how people react to music out at parties. You need to go to certain clubs, parties and cities to see unique vibes in the flesh.

You have played all over the globe, can you tell us about a few of your favorite places and why?

Fuse in Brussels is one of the oldest clubs in Europe, and probably my favorite large “classic” nightclub I have played in. The staff is great, the sound is really good, the people are absolutely ready to party and have fun, and everything seems to come together just right each time I have been. To have consistency like that with great bookings for more than 2 decades is a beautiful thing, I’d love it if we had anything remotely close in Los Angeles.Playing a beach party in Tulum after BPM in 2013 was immensely special, both with the Touch Of Class records crew, and later in a sunset back to back with Jozif that I won’t soon forget.

I always have trouble with that, and I think it’s a good thing. When people ask I usually just shrug and tell them the truth, which is I’m not sure. However my friend and excellent DJ Andrew Kelley have branded ourselves “Warm & Low” which goes somewhat of a way towards a genre or description.

What is your preferred method of production?

The more hardware the better. I like to use samples too, and most everything is done in ableton after I record drum machines and synths. Lately I have been working most with a Moog Voyager and an MFB-522 drum machine, along with bits from a Vermona DRM-1.

This music has been around for a while. Know your history. A lot of people who came before us are really good at it. Act accordingly.

Who are some of your favorite artists and labels at the moment?

Smallville has always been a favorite label and Julius Steinhoff the label head has just released a gorgeous album there. Petre Inspirescu is leading the way for beautiful and gentle dance music lately with his release on Mule Electronic a few months back. Rene Audiard is a young American transplant to Berlin who is making some amazing music right now, one to watch. Sonja Moonear is still one of my favorite DJs by far, if she’s playing I’m going, that’s pretty much all there is to it.

Philip Glass – Music In Twelve Parts, Part 1. The later recording from 1996. I listen to it regularly and each time am transported to a place few other recordings can take me. The rest of the album is also incredible but much faster and energetic. This opening piece is slow and 18+ minutes of what is basically deep meditation for me.

I have been working on new music and hopefully will see my first EP released this year. A few other works should surface here and there. In the meantime I’ll be going to Europe for the end of the summer, ibiza for a few months and then Berlin.

This mix represents what I would consider my LA vibe. Still deep and relaxed but with a little bit more funk and freak in the 2nd half. It’s inspired by driving down Sunset Blvd. One of the best drives in LA if you don’t actually need to be anywhere specific.