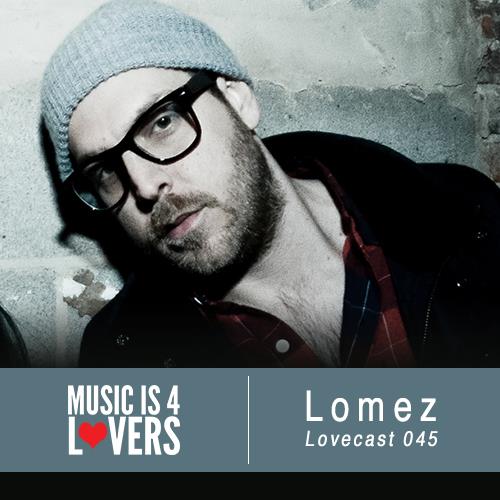 Lomez is a multifacted musician whose career has undulated through various projects during his 17 years in the industry.  His passion for artistry in its literary, visual and auditory forms stems from his dual cultural bases in Baltimore and the Balearic Isles, developing character values rooted in diligence and refined creativity.  This lyrical, disco-tinged Lovecast is magnetic and illustrative, so listen and enjoy our conversation with Lomez….

Let’s start from the beginning, can you paint me a picture of your musical background?

I’m from Baltimore, just about an hour north of DC where I am living now, and I started becoming very interested in music when I was 16 or 17, going to nightclubs in Baltimore.  Worked as a promoter, eventually went on to DJing and producing, first started releasing around 20 or 21. After a while I started getting booked overseas. I got an e-mail one day saying, ‘We want to bring you over to Mallorca,’ and as a kid who had never been out of Baltimore I couldn’t turn it down. It was an era in the early 2000s when I played Places like Varna, Bulgaria and Mallorca, Spain-beautiful seaside towns that initially captured me, and that was also around the time I started my first label.

Since then it has kind of been a roller-coaster.  Some years it’s bumpin’ and some years it’s not, but it takes dedication to continue when people with a lot bigger marketing budgets come into play these days.

Quite the challenge.  So you mentioned you started a label in the early 2000s, but Better On Foot is a more recent endeavor, correct?

Yeah it’s my third or fourth label- I’ve had a few different ones. Some of them I distributed White Labels and a couple other ones were more deep house and tribal sounds in the mid-2000s, but yes Better On Foot is my current project.

When did it start?

Okay so fairly new! What was your initial concept for it and how has it adapted and evolved with the present musical climate?

Well, we first started to have a musical outlet that wasn’t an entity that somebody else had a say in.  I’ve worked with countless labels over the years and it becomes difficult when you want to have artistic control over the artwork and release dates and such, so it was started with that intent…oh, and I’ve never driven a car so that is where the name comes from.

No, I am only able to live in cities with very good public transportation.

Makes sense.  Seems like you have always had a lot going on and undergone many changes throughout your musical history.

Yeah, I have gone under some other artist names than Lomez and I think it kind of reflects my evolution with production. There are different levels to the quality and sound in various periods of your life, and sometimes when you start a new project you don’t want the old catalogue to be associated with it.

It is hard to find that balance on the production side now between underground labels like myself who have little to work with budget wise and the bigger names but….I would rather put out good music on my own label sometimes than get it out to one that is well known but is going to change the message and drive it in a different direction.

I feel you.  As someone who writes on releases I know how much uninspiring music gets out there and am personally always looking for the more intimate, quality labels that I feel actually need the promotion.

Absolutely, and the worst part about it is that publicist-media relations have become so turnkey. It’s very different than when I started to DJ and I used to feel a lot differently about the scene…do I sound bitter yet?

Haha, I think there is a bit of a difference between being bitter and being real about your experiences. In this industry you are always going to have periods of discouragement and then some great tune or talented artist or amazing party restores your faith and pulls you back in.  Seems like Better On Foot is becoming that kind of inspiring entity.

True, it’s all in the family.  Everyone is from the Baltimore area for the most part.  Andrew Grant from Circoloco is a good friend of mine and we became close because we were both based in the Balearic Islands and both from Baltimore, so it was kind of a funny thing and he helped me get it off the ground and has been a great support.  And then we have people like Jubilee, Aphreaq, Prab and Timbre Woods who are local DJs I picked up and put their music out.

You have recognized a lot of great talent in Baltimore-think you will always stick to such a local focus?

One thing to understand about Baltimore is it is kind of a strange, desolate place at times-there are lots of vacant houses, blocks after blocks.  It is a very blue collar, tough town so over the years there have been cycles of parties doing really well and then dying down, so the scene itself isn’t super consistent.  Just so happens that I think a lot of the producers from around here are pretty talented.  It all makes sense though, there isn’t so much partying going on so we all have more focus on the studio.  But, Baltimore is also a really cool art town because we have an important art college called MICA and that brings a lot of international students and communal artist spaces that are really cool and each one has a different identity.

Sounds rad.  Where do you like to go out and throw parties in Baltimore?

There is a club called The Paradox, and I have never thrown a party there but when I was a little kid people would say “Oh there’s a party down at the Dox tonight,” and I thought they were talking about the docks like the boats! But it is basically like walking into Chicago in the 80s, that pure vocal house music is preserved there and the guy who owns the club is named Wayne Davis and he was a DJ in the disco circuit during The Warehouse, Zanzibar, Studio 54 era, and he is like 60 years old and still DJs-real modest guy. I love to go there, holds around 700 people and everyone dances so freely with a very welcoming vibe.

Red Maple on the other hand is a more intimate club, holds about 100 people and I tend to do my parties there because the music that I play is more appropriate for that setting…I have a hard time understanding how people can listen to stuff that is on the radio and think it sounds good. I really don’t know why people like the music they do.

…It’s a mystery to me as well, guess you just gotta keep on trekkin’ with the quality stuff, and your passion definitely shows through the music you choose to release and play.

Yeah this fall we mixed things up a bit.  I was getting tired of all the tech house so we put out some indie sounds, funk, some disco.  Not just lounge fodder that you hear on Pandora-something with an edge that is a little different and has a philosophical message that not everyone understands, but it’s a piece of art.

And in the last year we have expanded outside of Baltimore and put out music from some Italian artists called DOS some guys from Peru called Deaf Pillow and we just had that release from the guy from Australia Fables!

Yeah that was great, I wrote on it.

Ah really? Cool. Yeah that’s a guy who just e-mailed me like ‘Dude I got a demo.’

Yeah! And I mean, if he sent that to a larger label they would say ‘Oh that’s great we can get it out in 6 months or a year.’ So I feel like people appreciate the underdog and being a little more agile with our label. I think we released 6 records this year already.

Amazing.  I am always drawn to your cover artwork as well, very colorful and thought provoking.

Thanks, it’s a combination of different artists actually.  There is a woman named Katy Hirschfeld, based in Austin right now and she is a collage artist and has an extensive catalogue.  And there is Joshua Mott, aka Ningishzida, who does illustrations from Baltimore. So I choose the artwork based upon their previous work- it’s not usually done to the specific music but rather I select it. A couple times we’ve done custom ones, like I gave her the idea of a kind of gypsy woman with flowers in her hair for Floral Fauna. Now there is a guy Xisco Rosell from Mallorca that’s living in Berlin and I want to start using some of his photography so we might change up the art a bit. I enjoy promoting artists from all over the spectrum.

Beautiful! What would you say your main artistic focus is at the moment?

Sound design and melody is something I am passionate about as well as song writing, and I released a sample disc for all the producers last month called Hitchhikers Guide to Deep House, which you can find HERE. It’s basically loops from 14 songs,  so instead of finishing them I said, I am gonna give them to the customer and they can see exactly what my process is.  I am also starting to get more into song writing, had a BBC Radio 1 Essential tune with Noir last year and that was a song I did the lyrics for.

Yeah I do sing, I sang on the Hypercolour record which is called “Turning the Heads” and a few others. I like to write lyrics and short stories.  I have a big literary interest with beat poetry and 70s fiction novels-knowledge that isn’t given so much attention nowadays.

Yeah there are times when I’ll be out in the world and I will experience something and feel like I have to comment on it somehow.

For sure…Your mix is beautiful by the way!  Love how lyrical it is.

Thank you!  It is a recreation of a set I did a few weeks back opening for Mano Le Tough at U Street Music Hall in DC as an afterparty for Kraftwerk. I thought they were recording it the whole time but it turns out they didn’t at all so I decided to rerecord…it’s basically inspired by that set and there is some fun disco stuff thrown in too.

Sweet.  Any special events you are particularly excited for in the near future?

Yeah, we have a party coming up with Alex From Tokyo at Red Maple that is gonna be a Better On Foot Showcase.  He is a very inspiring artist to me, a very eclectic DJ. Born in Paris but raised in Japan, so I feel that mutual connection with him like being from someplace but growing up in another in your formative years when your true values are set.  We are gonna have him play, Life On Planets and Chris Nitti also so that is coming up on May 16th and I will probably continue doing these as special monthly events.

Awesome.  Well, really looking forward to what’s to come with Better On Foot-thanks so much for the mix and having a word with us!

Thank you, hope to catch you on the West Coast soon :]