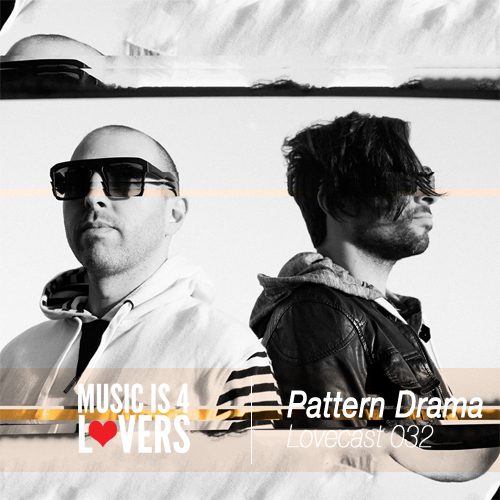 Pattern Drama consists of two incredible DJs and producers Corey Baker and Rami Deejay.  This dynamic duo blew us out of the water with their beautiful and sophisticated sound.  We have had their latest podcast on repeat since it first came out and their new release coming out on Touch Of Class Records is nothing short of amazing.  These guys have been producing timeless music and we feel they are the future of dance music. Their ethereal, mystic sound is something other producers wish they could re-create.  Pattern Drama is our latest obsession and we can’t stop listening to their music and we know once you hear their music there will be no going back.

Resident DJ of NY’s Verboten and co-founder of Bespoke Musik, the gifted musician and producer, Rami Abousabe, began his musical career at a young age, playing guitar and bass in various bands and making the transition into electronic music after catching the DJ bug. Rami has exploded onto the NYC and international stage with pitch perfect, genre-defying sets. Corey Baker also began his musical path in NYC, though London is where he made his mark, helping to establish and produce for the house music trio Wildkats, who have seen major success internationally with their productions on imprints such as Hot Creations, Get Physical, Hot Waves and Off Recordings, amongst others. Corey’s return to NYC inspired the musical fusion that is Pattern Drama, a unique assemblage that unites the matured and contrastive musical styles of these seasoned artists.

Pattern Drama will embark on a nice little tour for the release of their debut EP on Touch Of Class Records, Sweet Romance.  They will be hitting the west coast this week and you can catch them they playing in San Fransisco, Seattle, Los Angeles, and San Diego. If you are in any of these cities this week, we highly recommend you check them out!

Can you tell us a little about Pattern Drama and how you too linked up?

C: Rami and I knew each other from New York before I moved away to London in 2006. We were both upcoming New York local DJs and knew of each other in the scene. It wasn’t till BPM 2012 that we came back into contact with each other. Rami was attending the festival and I was performing with the Wildkats project. Rami ended up booking Wildkats for New York and we kept in touch. When I moved back to New York in November last year Rami came and picked me up from my temporary housing and took me to his studio. After that first session I knew that we could work together. We have been working on music for about a year now and although it’s a totally different direction than I was going with the Wildkats project, Its defiantly the best sounding and the most inspiring times I’ve had as a producer.

R: We knew each other 5 or 6 years ago before Corey moved from New York to London. When he moved back it felt natural to combine forces.

What is your goal with this new project, and what can we expect from Pattern Drama in the coming year?

C: Our goal is simple, Make a buzz and let people know what were all about. I think our project is totally unique and no one is doing dance music the way we’re doing it. But being such a new act keeps us humble also as there are lots of people that wont book us or sign our music simply because they haven’t heard of us yet. Luckily this isn’t our first rodeo and we know a few of the right people so coming up we have some great labels that we are going to be working with. Without letting the cat out of the bag completely Ill say we have our debut EP with Touch Of Class which by the time you all are reading this is already out on vinyl and hits beatport December 23rd. We will also be working with Lee Burridge and his label “All Day I Dream”. That’s about all we can share at this time.

R: Our goal for the project is to create and perform whatever we happen to be feeling at the moment. Our hope is that what we create is timeless, honest music that will live long after we are dead. In the next year we have some amazing releases and events planned as well as some live elements well be incorporating into the show

Right now, you a producing some of the most inspirational music out there, where do you get your musical inspiration from?

C: At this point in time one of my biggest inspirations is Rami himself. It’s such a pleasure working with him in the studio. I’ve also really gotten into trying to familiarize my self with as many cool sounding instruments and percussion tools from afar. You will see these in a lot of our future productions

R: I am inspired by many things. Of course there’s music itself, but also stories of perseverance, or even a beautiful landscape. I’m inspired by the idea that we live in a world filled with beautiful art whether it be the sound of a waterfall or color of a fish. I really like that idea.

You both have made great music in other groups and as solo artists, how does that influence the music that is being produced as Pattern Drama?

C: For me I am trying to approach this project with a clear head and keep it totally separate from my other projects or my solo stuff.

R: As we develop our own creative processes individually over the years, were able to learn from the differences in each others process. By trusting the others creative decisions and seeing how that decision impacts the final product, you can really learn a great deal.

Can you tell us a little about Touch Of Class Records and your affiliation with them?

C: Touch Of Class Records is our family. Mikey Tello runs the label with Ray Zuniga and they have accepted us with open arms. They totally believe in what were doing and trying to accomplish and I love them for that. I personally manage the label and Jonny Cruz does the A&R. Sharon Buck also has a lot to do with promotion and assisting with the labels image. We are a big clumpy family and we put out some outstanding music.

R: Touch of Class Records is a Label founded by Mikey Tello of Pillow Talk .. based in Berlin. Its an amazing family of very talented artists I immediately wanted to be a part of.

Now based in New York, what would you say are the positives and negatives of living in this city and how has living in NY affected you as musicians?

C: Although I’ve been making music for nearly 10 years I’m not actually a musician. Well. I can’t play an instrument really well anyways. I have my moments in the studio but it doesn’t come naturally to me like it does for Rami who has played guitar, bass and piano for years. New York is doing exactly what I need it to do for me though, in a positive way. There is no other place id rather be.

R: I honestly can’t think of any negative effects of living in the city as long as you can find a place to make some noise! Otherwise the inspiration you can find from the people, the art, as well as the city itself is truly amazing. I often fell lucky that I’m exposed to so much.

What would you say are your favorite attributes about each other?

C: My favorite for Rami is his ability to be creative and unique and take an idea to the road less traveled and have it payoff in the end.

R: Corey is always ready to work .. and when were not together were still working individually .. Its important not only to have the creative talent but also the drive and discipline.

This mix is more on the dance floor side of things for us. It’s recorded live and bit more pumping than our TOC mix. It features music that we enjoy playing in our sets and some of our new music, and sorry there won’t be a track list.