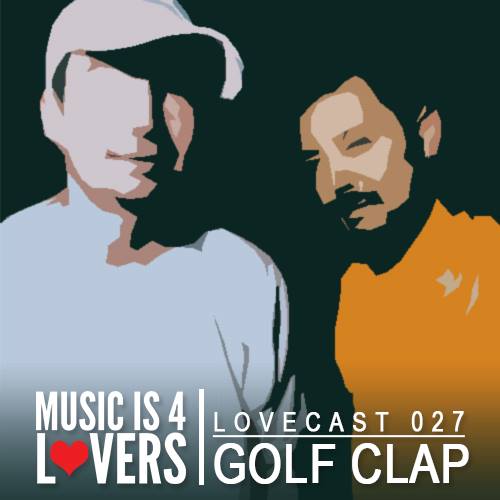 When Hugh Cleal and Bryan Jones aren’t teeing off on the links, harassing caddies, and downing Arnold Palmer’s, they can be found behind the decks and in the studio as Golf Clap. Although they only got together to form this dynamic duo earlier this year, the two have quickly descended upon the world of deep house. With releases on Freeze Dried and i! Records already to their name, it’s clear Golf Clap are just getting started. They were kind enough to take a few minutes from practicing their swings and perfecting their form to tell us a bit about themselves, and even made a masterful mix for our exclusive enjoyment.

Tell us a little about this mix. How and where was it recorded? What did you have in mind when making it?

This is a studio mix done in Ableton Live Suite 9. All songs are put through Mixed In Key beforehand. We do so many mixes these days and have so much new music, that we try to really theme our mixes. Sometimes we’ll do a little faster techier style mix, and other time it will be extra slow and deep. We try to make our mixes ones that you can listen to not at the club. This mix is a slower housier one. Summertime, good vibes, feel good shit.

How did the two of you meet?

B: I was playing some of Wattie Green’s songs from Hugh’s label Coyote Cuts and I signed a tune to his label. We got along and he booked me for a couple shows.

How did the idea to start officially playing together as Golf Clap come to pass?

H: We are both deep house guys at our roots and that, along with our ever-evolving change in sound, eventually led us to the idea of creating a combined alias that better represented what we are into. Often times an artist gets pigeon holed by their previous bodies of work, and we wanted people to judge our new sound on its own merit.

Where did the name ‘Golf Clap’ come from?

B: I personally hate picking names for anything important like a group or a label. It stresses me out, and I immediately think of 10 reasons why I don’t want to use every name we come up with. It really has no significance, and any stupid jokes or references to golfing, or clapping, or clapping while golfing, are purely coincidental. All of our drum sounds are actually sounds we record on the links. Our high hats are all actually just zip lock bags filled with golf tees and we shake them in front of a microphone. Sometimes we see someone with the most majestic golf swing while at the driving range. We will actually record the sound of them swinging the club, but from afar. Then we layer that in our songs. You can’t hear anything, but it gives good vibes like you’re on the course. Its a subliminal thing.

Bryan, you’re originally from Indiana, right? What first brought you to Detroit, and what is it about the city that has kept you here?

B:I came up for a couple gigs in early 2012 and just felt at home here immediately. I had more friends here than I did in Indiana after just a couple trips. There’s always something going on here, music-wise. Basically, it’s exactly what I needed, but I just didn’t know it. I’ve lived in a few different places over the years, and I’ve never felt more at home in a city as I do in Detroit. Can’t thank everyone in the city enough for welcoming me here.

Hugh, how did growing up in Detroit play into your involvement in the music scene?

H: Growing up in Detroit, I have been exposed to some of the best music anywhere in the world. I’ve been involved in the underground music scene here for most of my life, first throwing warehouse parties and eventually several club adventures. I’ve been fortunate enough to make some strong connections that have really helped this new project take off.

What would you say are each of your strong suits when it comes to DJing and music production? In what ways do you complement each other in the studio and behind the decks?

H: Bryan and I truly have a yin and yang relationship when it comes to everything we do. I have more of a knack for the business end of things, and my experience as a DJ is where I think I shine on the performance end, where Bryan has a lot more experience on the production end.

Bryan is a night owl, so he usually works through the night, and then I take the morning shift in the studio.

On a personal level, what is your relationship like? I imagine the two of you have a lot of fun together.

H: We have been living together, producing, and performing for almost 2 years now, and I couldn’t be happier. In general we spend a lot of time together, so outside of the gigs and music we pretty much keep to ourselves at home so we don’t get too sick of each other. We enjoy Arnold Palmers and discussing proper form for our swing.

Who are some artists that have inspired you and influenced your sound? Any tracks in particular that were especially formative for you?

What equipment do you use for all these productions you’ve been pumping out?

Lately it’s been Ableton Live Suite 9 with the Push controller and the Akai APC40.

You recently got back from a whirlwind weekend on the West Coast, have an upcoming gig in Denver, and constantly play around Detroit, all while holding down a residency at the Grasshopper in Ferndale. What sorts of things do you guys take into account when preparing for your sets? Do you play the same music in Detroit as you do on the road?

We use a hard drive and connect to CDJ2000 Nexus players for our gigs. We make a new folder for every gig in Rekordbox. In Detroit we try our best to play as much new music as possible and really keep it fresh. We make sure not to play the same songs week in and week out. When we play out of town its usually a “best of” set of all the stuff that worked really well in Detroit, but that we’ve played out at home. Basically, find all the stuff that has worked the floor the best in the last 6 months or so and play those. It all depends on the show, of course. We try to stay very aware of who we are playing for, where we are, and what time we are playing. Being able to play room appropriate is something we look for in good DJs, so we always keep that in mind.

What have been some highlights so far of your time playing together as Golf Clap? Any parties in particular that have really stood out and been special for you to play?

H: I think Bryan would agree that the highlight so far was playing for Scott K. in Los Angeles a few weeks ago. We were invited to play the infamous We Own The Night underground. It’s a pure word of mouth, invite only party. We were shuttled to a remote spot in Hollywood and let out into the back of a piñata candy factory. We walked into a completely packed warehouse party with 1000 people going crazy. They made the mistake of giving us a dry erase board during our set. I ordered Bryan a well vodka, neat, in a plastic cup, just to show Scott that we are YOLO on the inside.

What does the future hold for Golf Clap? Anything coming up you’re especially looking forward to?

Our new single for i! Records just came out! Other than that, a new single for Grant Nelson’s Freeze Dried label with a remix from Low Steppa coming soon. 3 or 4 vinyl projects with remixes from Scott Diaz and DJ Nav, and our remix of Colette’s single “Hotwire,” all either pressed up now or on their way. By the way, you should check out Colette’s album. We love her.