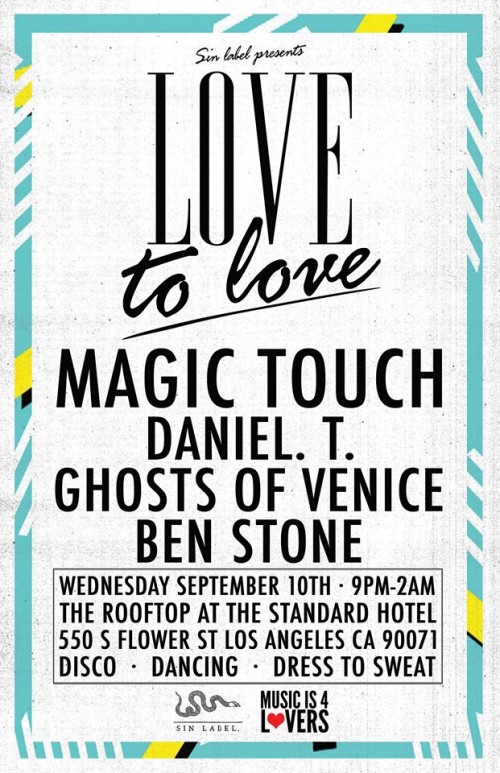 Imagine a party that takes you back to the sights and sounds of New York City in the 70s and 80s. Where DJs likeLarry Levan and Francois Kplayed cuts from Karen Young,Taana Gardner, Loose Jointsand First Choice at the Paradise Garage. A time when labels like Prelude, West End, and Salsoul were major players in the underground Disco sound. The movement that spread to Chicago and gave way for DJs like Ron Hardy and Proto-house artists such as D-Train. Resident DJ, Ghosts Of Venice will provide the soundtrack of classic Disco with a modern twist as well as special guests that are carrying the torch for scene in 2014. Artists such as Rahaan, Cyclist, Black Madonna, Joey Negro and Dimitri From Paris.

Sin Label, originally based in Chicago, come to bring those good windy city vibes to the top of the famous Standard Rooftop in Downtown Los Angeles with their party called LOVE TO LOVE.  These parties are known for their good vibes, great music, and sweaty dance floors.  Disco is the theme and they are bringing in stellar acts like Magic Touch,  Ghosts Of Venice, Daniel T from Cosmic Kids, and Ben Stone.  Things are definitely going to get physical, so make sure you bring your dancing shoes and dress to sweat!  EVENT INFO


Damon Palermo has been making adventurous house and disco music under the moniker Magic Touch since August 2011. In a short time the producer/DJ has amassed an impressive following and several well-received releases, kicking off with the critically-lauded 100% Silk release “I Can Feel The Heat,” which was a recommended release of the week at Boomkat and made 20JazzFunkGreats Best of 2011 list. Following his debut, Palermo released a split 12″ with close collaborator Ital and a collaborative EP with Japanese producer Sapphire Slows. Magic Touch has continued his prolific touring and release schedule. Most recently, he released the “Nothing More” EP for Tensnake’s True Romance label as well as “Palermo House Gang”, a full-length for 100% Silk which is his most realized, collaborative venture to date. Magic Touch live sets mix the psychedelic ethos of San Francisco with the house movements of Chicago, Detroit and smatters the whole thing with a solid nod to the UK rave underground. He has played live at Sonar, Unsound and CTM, and is also a formidable DJ, appearing at Berlin’s legendary Panorama Bar, Lux Frágil and WWW Shibuya.


Ghosts Of Venice has become one of the most widely respected young DJs in the House and Disco community. Starting in 2009 he has stayed true to the House and Disco sound whilst overs have been and gone. His music is supported by everyone from Todd Edwards and Derrick Carter to Tensnake. Ghosts Of Venice decided to focus on the Disco side of his sound in 2013 and began working with legendary labels such as Salsouland West End on a series of remixes and re-edits. He has remixed many various artists including Kimbra, The Knocks,Treasure Fingers, Todd Terryand French Horn Rebellion.