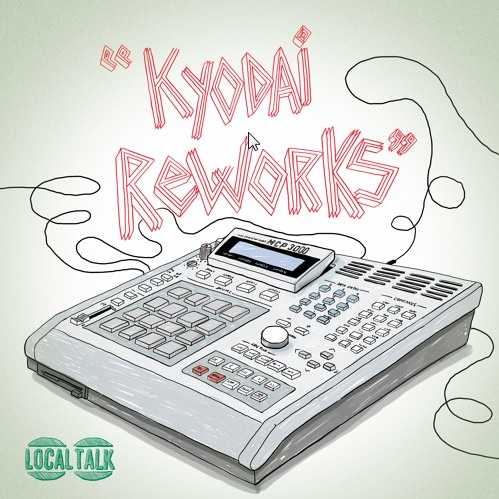 This new album (or double EP, depending upon how you look at these things) is a magnificent collection of creative collaborations, namely Kyodai’s remixes of some crucially relevant names around the deeper & experimental sides of the House spectrum.

Atjazz receive a makeover which turns their revered ‘Fox Tooth ‘ into an equally driving yet sonically soaring masterpiece, where Electronica and Housey grooves truly greet each other across a previously insurmountable divide, sounds of home listening tripadelica clashing with pure dance-floor energy, and roots that hark back to the original blueprint of Chicago House Music.

This is something the pair of Berlin producers do well, managing to blend surreal sonics with irresistibly dancey grooves, as displayed elsewhere on this longplayer.
Bassfort’s ‘Moonlight ‘ is another track which gets the mighty reworks treatment, and along with Lay-Far’s ‘Side 2 Side (I Just) ‘ you can hear just how much of Kyodai’s combined record collections must have rows of Masters at Work and Kenny Dope productions across their floors and walls, for there is such a great reference and nod to these legendary producers here.
Yet it’s all peppered by their ability to traverse into otherworldly Techno too, and long percussive buildups which lead into dramatically huge club moments, the kind where strobes are a flashing and lasers are picking out hundreds of hands in the air, such as Adreas Saag’s ‘In the Box‘ (rather crazed and hugely effective club tool), or the equally functional ‘Vengo Loco ‘, which is Kyodai’s own percussive stormer of a track, perhaps equally at home in a Francois Kervorkian remixes set itself, and most certainly hugely mixable in a creative DJ set. This is what makes this Reworks album ultimately so great, it’s the sheer variety on offer from the most musical and memorable of tracks, to those that you work hard in the mix, it’s all here in an album that will be well received on dancefloors, radios and living rooms for some time to come.