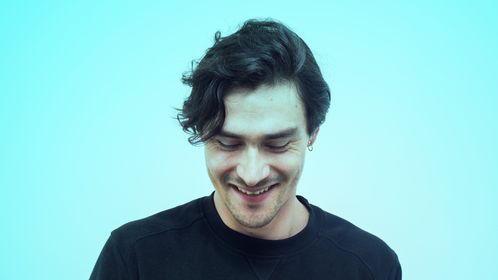 How are you, how has the year been, how has corona affected you?

Overall pretty good, it’s been a rollercoaster honestly, but I can’t complain. I’ve tried to focus even more on the things I care about and less on the things that get in the way. 2020 provided me with less distractions, so I’ve been concentrating mainly on producing music and staying healthy.

You were raised between Hamburg, New York and Santiago de Chile. What was that like?

Well it’s hard to explain, because I don’t really know any different. I guess it has taught me adaptability. It was difficult having to move to an unknown country every couple of years and making new friends without speaking the language, especially at a young age, but now I’ve learned to appreciate the positives that came out of that.

What impact did it have on your sound and what can we hear of that?

I’ve always been a curious person, especially when it comes to sound. As a kid you want to fit in, so you start absorbing everything you can from your surroundings. When I lived in NY between 92′ and 95′ the buffet of rock bands we could listen to on the radio was really fantastic! I started out playing in punk rock bands in my teens, later had an acoustic duo, then I was part of a synth-pop band in Chile, which I guess was the first step into electronic music. I think I’ve subconsciously grabbed a little bit of everything in order to try and make my own thing. The past years I’ve clearly been influenced by the club culture of Berlin, but who knows what will influence my sound in the future.

Tell us about the new EP for Leisure Music Productions – What inspired it? What’s the musical aim and vibe?

For this EP I started out playing around with some afro house loops and percussion samples on a trip to Austria in the beginning of 2020. Afterwards in Berlin, I wrote the lyrics and mixed in the melodic vocals and techno-like synths. “The Accolade” was actually finished relatively fast, however “Baccarat” took quite some time, especially the arrangement and mixing. There were (are) so many things happening in the mix that I had to make some sacrifices in order for each element to fit well. The aim, I guess, was creating something I could sing in the club but still had that aggressive and dark techno spirit. Regarding the remixes, I met both Max and Robin about 1-2 years ago and have always really liked their productions, so I was very happy when they agreed to remix a track for the EP. They turned out awesome!


Is it hard to be inspired and make music when you aren’t playing DJ gigs?

Not really for me. I have literally DJ’d once in my life. There have been occasions in which I’ve done hybrid sets with friends of mine, but generally I play my own productions as a live act format. I honestly prefer the studio life more than the live shows, which is something that I realized during quarantine. Being in the studio has become a routine and I enjoy it a lot. Plus, inspiration doesn’t have to come from music in order to make music. There are so many beautiful things in life that can inspire us to create!

What gear do you have in your studio – are you a gear head?

Fortunately no haha, I used to be, but have learned that less is more. I get anxious with too many options, I also don’t have the money right now to afford that “luxury”. I’ve learned to master what I have (if I’m attracted to it of course), and if I ever get bored of it, I sell it or change it for something else. I’m not a collector, and lately I’ve been working more in the box than with external hardware, with some exceptions, but Diva and Repro are my go to synths. The most important thing for me is working in a treated room and listening on good monitors (that I’m used to). I use Eve Audio SC 307 + TS110.

Are you formally trained, do you have any playing skills on piano or guitar etc?

I had piano lessons from the age of 7 until I was an early teenager, but then switched to guitar because it was “cooler” haha. I’ve never stopped playing guitar (classical and electric), which I enjoy, but I honestly wish I had better piano skills. Regarding singing, I was in classes for 3 months, but almost everything I’ve learned so far has been by imitating my favourite singers and actors, from guys like Joao Gilberto, Jeff Buckley and Van Morrison to Jim Carrey, Bill Hader and Sascha B. Cohen.

How do you find the emotion you do to put into music? Where does it come from?

That’s a good question which I don’t really know how to answer. I’m just very grateful I’ve found a way to channel my feelings into something I really love doing.

I’m slowly starting the process of readapting my live set for when the clubs open again, in a way that will allow me to have more space for improvisation, which for me is the most fun part of playing live.  And regarding upcoming releases:

I’ve got a remix for Vom Feisten & Daniel Neuland on RAWLS in December, then in January my EP on Poesie Musik with a remix by Dan Buri, and later in 2021 another EP on 3000Grad, a remix for Oscar OZZ again on Poesie Musik, and a remix for DarkSideVinyl & Ucha on Go Deeva. I also have a couple of unreleased tracks that are looking for a home …

What are you most looking forward to about 2021?

Being able to see my parents who live in Chile. And a Covid-free summer would also be refreshing.