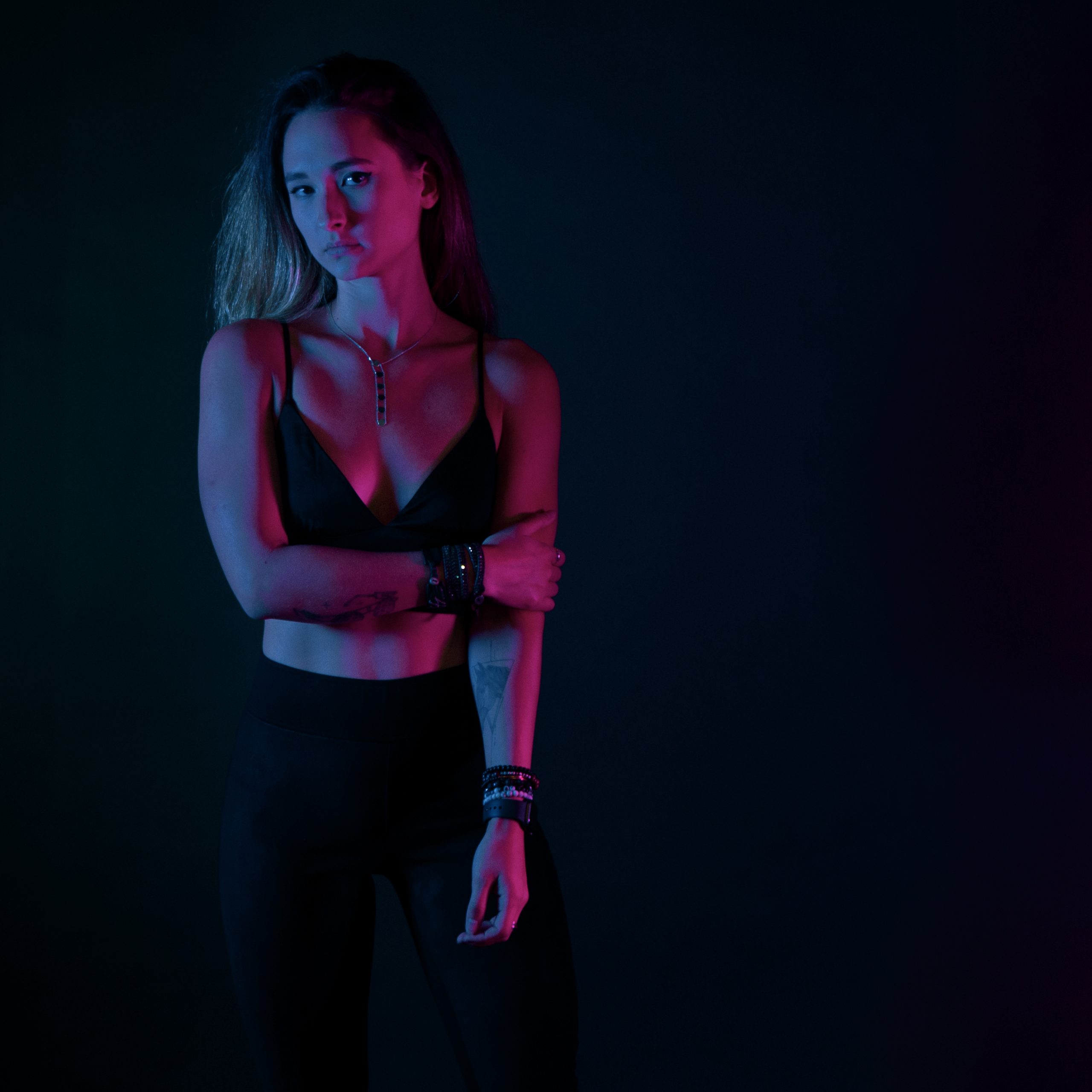 Out Now on But Did You Dance – “Sin / Deviance” is an exciting techno release from DJ/Singer/Producer Samanta Liza. Following the release of her debut album, “Sin / Deviance” is a dark, sexy techno record that taps into Samanta’s darker side and sets the tone for some of her upcoming 2023 releases.

Bringing this record to life, Samanta worked closely with Rachel Lana Cohen on the lyrics and album artwork and tapped Enamour for the mix and master. Not only do these dance records punch through big sound systems, but they also tell a captivating story about the intoxicating feelings that are rooted in sin and deviance.

A rising star, Samanta Liza is a multi-talented woman who is creating her own eccentric sound by fusing rock and new-age elements with techno and electronica. Some have described her as the Monolink of women Singer/Songwriters/Producers.

We spoke to Samanta Liza about inspiration, her experience working on this record, her studio setup, and more

Hey Samanta! It’s a pleasure to have you here with us. What have you been up to lately?

Thanks for having me! Lately, I’ve been balancing my time between my day job, spending time with my friends, and working on my releases for 2023. I feel like something really clicked for me musically within the past few months, which is very exciting because I feel like my music is more cohesive and intentional now. I’m working really hard on delivering the absolute best work that I’ve been able to produce so far for my sophomore album, which I’m planning to release next year in the summer.

Congrats on the release of your latest EP «Sin/Deviance» on your own imprint But Did You Dance. What was your inspiration behind this EP?

Thank you! I have been anxiously waiting for this release to come out. I’m super happy with the promo feedback so far and looking forward to hearing more listener feedback!

What was your experience working on this record?

I almost forgot that Sin first started as a 121 bpm remix of Britney Spears – I’m A Slave 4 U. Probably impossible to hear now, but that’s how I started developing the groove. I then realized this production had so much more potential to stand on its own. As I continued to work on it, I would play-test versions that were only 80% finished, to get a sense of how it’d feel on the dance floor. I ultimately ended up where the track sits today at 125 bpm with original lyrics, written with help from my dear friend Lana.

Deviance started with a whimsical lead synth sound as the main hook that’s no longer part of the track. As I started to layer on vocals, two different vibes were going on. Michael (aka Enamour) was a big help in helping me finalize both records, but his ear on Deviance is really what helped solidify the vibe. The track isn’t whimsical at all. It’s dark, deviant, and sexy. Lana and I imagined ourselves in the dark room that kicks off the first verse and we continued to write the lyrics together from there. She’s a crucial partner in my lyrical writing process. She has a beautifully creative mind and is great at telling stories.

How did you get into Music Production and DJ’ing?

I have been writing songs since I was a young teenager, and I dabbled in music production when I was in college, but I didn’t get serious about music production until the pandemic. I got covid and was stuck at home. Felt like the perfect time to lock myself in and learn production. I enrolled in Lee Foss’s Repopulate Mars production course. John Summit was one of the teachers. I got into DJing during the pandemic as well. My friends and I were partying our way through the pandemic. Going to underground raves, secret warehouses, and repurposed office spaces. I met a bunch of DJs and started drumming (on the djembe) with them during their sets. I was having a conversation with a friend at a festival who asked me “Why don’t you just learn how to DJ? Do it all yourself.” So I did.

Can you name some musical influences that you believe have shaped your sound?

Wow. So many! Where do I begin? I used to be a hardcore indie fan. Nowadays, I only listen to indie music every now and then. I still listen to a lot of psychedelic rock (especially Pink Floyd). Admittedly I am also a sucker for pop (Billie Eilish, Ariana Grande, Dua Lipa, Michael Jackson). However, when it comes to electronic dance music artists, I’ve been really enjoying music from the likes of Monolink, Rufus Du Sol, Colyn, Innellea, Eelke Kleijn, Patrice Baumel, Enamour, and many others.

When I create music, I blend my favorite elements from psychedelic rock, pop, and electronic dance music to create an eccentric sound that is my own.

I’ve got my studio at home. Recently got a sit/stand desk (highly recommend this!). Got my Ableton Push, the Apollo Twin audio interface, Adams monitors, a completely specced out laptop (CPU is never an issue), and most importantly a bunch of instruments. I have a Neumann mic TLM 102, I’d like to upgrade it though. A pop filter, an SE sound shield, and Mogami gold wires. I do not have a good sound treatment situation at the moment. This is a big downside, so I don’t trust my room for final mixdowns.

Can you mention some of the instruments ( Digital and/or Analog ) that you believe define your sound?

I use a lot of Diva (u-he). I mean come on, she’s the best. Arps, pads, bass, sirens – I mean I probably use Diva in almost every project. I love a good fat snare. A solid groove/drum bus is a must. Because I play hand percussion, it’s important that my percussive rhythms and sounds are emotive. That said, I am working on my ability to create a solid groove with as few layers as possible. (Advice from none other than Patrice himself!)

Electric and bass guitar are two instruments that define my sound. You don’t hear any of it in this record, but you will in my upcoming 2023 releases. Last but not least, my vocals.

Overall, I have been working on more minimal production to allow space for my vocals to live and breathe. After all, my vocal is my main instrument.

What has been your highlight gig this year?

Tough question. For me, one of my biggest performance highlights was my debut album release party. Even though this was an intimate show, I had the opportunity to connect with people at the show and it was beautiful. This was the first time I performed a live solo performance with as many instruments as I could fit on a relatively small stage.

Now that «Sin / Deviance» is out, what can we expect from you next?

Sylphomatic remixed my record I Don’t Regret You, coming out on But Did You Dance in January. It’s dark and driving – looking forward to that one. I have at least 10 tracks so far that are well underway for my sophomore album, which I have planned for a summer release. Before the summer though, you’ll get a sneak peek of the album with a couple of pre-releases in the spring.

Thanks a lot for taking the time to answer our questions, is there anything else you would like to mention before we go?

Thank you for having me! If you like my music, don’t forget to follow me on socials for updates about upcoming shows and releases. I have two shows in January (DC 1/7 and NY 1/14). If you’re reading this, I’d love to see you there!