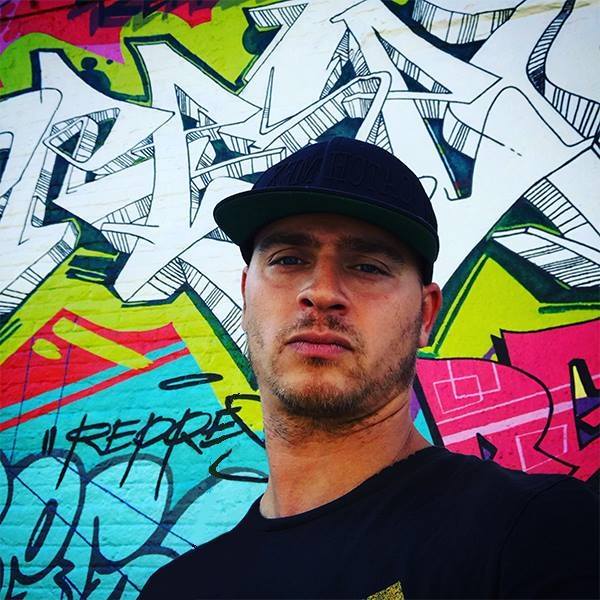 Hi Ralph, nice to speak to you, how are you?

Nice to chat with you as well. I’ve been busy but things are good.

Tell us bit about Half Assed. What is the story behind the label? How did it come to form?

Haha I’m definitely going to be asked this a lot. I guess it was out of necessity really.  I’m sure anyone who has shopped demos knows that the process can be lengthy. You’re usually faced with a decision to keep shopping it, shelf it or put it out yourself. Having a label before I was comfortable enough to go that route again as an outlet for releasing my own music.

Ultimately Half Assed is a reminder to me to not take things so seriously when it comes to music production. Sometimes we get all stressed out over a track. I have struggled to finish songs trying to make them perfect. Usually it results in an unfinished ideas. So it’s best to step back and enjoy the process more. Sometimes you gotta keep it Half Assed.

Ralph Session came along in 2 parts. When I was a breakin’ I went by Session. Session because I was always down for a practice session, a smoke session etc. It was multifaceted. When I started producing music E-Man said to me “What if you use Ralph Session”?  Being Ralph is my real name, Ralph Session was born. It felt right because it kept a piece of my dancing background and part the real me and turned it into something new.

House, I say that because when I was introduced to House Music back in ’03, the one thing I quickly found out is that theres many sides to this thing we call house. I tend to lean towards the New York Deep House, Classic sounding tracks. As well as Chicago, funky, disco shit. But I go where the track takes me. I’m not afraid to be in multiple sub-genres of house. They all have influence on my choices in the studio.

Were you always musical growing up? What drove you towards your sound?

Not in the traditional sense. My family is from the Bronx so I had a lot of Disco, Soul and Latin music around me growing up. Saturday mornings my mother would blast music while we cleaned the house. When I was 14 I got a pair of belt drive Gemini’s and would use them to play breaks for me and my boys to practice to. All the years I was a B-Boy made me dig for music to dance with. Those records were lessons into funk, soul & Hip Hop that still live with me today. I was always a fan of R&B. Growing up in the 90’s we had a lot of great artists everywhere. I think thats where I get my love of vocals from. I would say my sound was shaped by Shelter parties in New York in the beginning. Cielo was a big deal for me back when it opened. It has an underground vibe but is beautiful inside.

What would you say the scene in New York is like right now? What’s good / bad?

Right now I don’t know because I moved out of New York last year.

But New York’s scene is always changing like the city. Theres at least a couple parties every night. We have had a lot of places shut down but there seems to always be new ones popping up to replace them. You really can find any sound you want. There will be a party for it. You just have to look. A lot of the proper house spots moved from the city to Brooklyn. Thats probably been the biggest shift in the last decade. One of the best parts for me though is the late night food scene. I feel it’s a major part of why the New York scene is so dope. Its that icing on the cake after a great night. Then you hit an after-hours spot!

The bad!!!! – If I was to say one thing to its downside it would be the cover charges. New York is expensive so look for the cheaper pre sales to save some money for drinks.

Where do you draw inspiration from before getting in the studio?

I would like to say I have all these ideas in my head and whatever but honestly no. I mean there’s the obvious inspirations like Kerri Chandler and MAW. But inspiration is in everything. But most for me comes when I find that sample or Chord progression that hits me. On a good day the track just falls into place and you find the right sounds quicker than other times and everything flows. Sometimes I fall asleep listening to the same loop for hours. You have to constantly look for inspiration because that shit runs out.

Why the move to Barcelona?

I fell in love with this city when I came here in 2015 for a gig at The Vocal Booth Weekender (great party def go). I was looking for a city with a beach and a lighter winter really. New York winters are brutal and I feel like a different person in the winter. It helps that Barcelona has a pretty good music scene here too. There are always great local and international Dj’s playing here. I haven’t been here long but it’s been a great experience so far. The people are truly amazing.

Would you say your sound has changed since the move?

I wouldn’t say it’s changed much. I would say that I finally have a good work flow. So I can get ideas down quicker and be more interactive.

What do you do to unwind outside of the studio?

The beach to relax. Cooking and  Weed. They just go so well together. I have a Puerto Rican, Cuban and Italian back round so I have a lot of cuisines to choose from. My family has taught me well. Most of my Instagram is food pictures

What music do you listen to aside from house?

Any advice to younger producers wanting to start a label?

Wait, or better yet think it through. Plan it out. Get a bunch of releases finished first. Find a friend who wants to be part of it, It lessens the work load. If you’re a younger producer, meaning you haven’t been producing and releasing music for that long then maybe it’s best to shop and hone your skills. You have to focus on the label as a label and not just as an artist. I am going through that same issue right now. That takes away from time in the studio so be prepared for tedious tasks not related to music.

What does the future hold for Ralph Session? Any further goals or ambitions to achieve?

Like Biggie said “Sky’s the limit”. Dj bookings, Remixing again, pretty much everything. But I am just happy to be releasing music again after a 4 year hiatus. So for me its like day one, a new artist to look out for. I am in a better place in my life and am ready for what comes my way. I moved to Barcelona to be closer to the parties and clubs I want to play in. I hope you’ll come for the ride.

Where We Started is out 18th September!