Interview with Martin Buttrich: 20 Years of Music, His 20 City Tour, A New Label and More 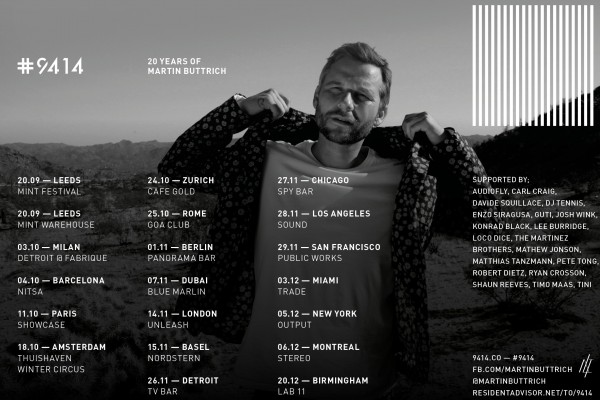 Twenty years of making music is enough to call someone an expert, but accomplishing as much as Martin Buttrich has goes beyond skill and into the world of talent. Martin Buttrich has been producing tracks since 1994 and this year, 2014 (#9414), he celebrates the 20th anniversary with his love, music. In celebration of this occasion, Buttrich has embarked on a 20 city tour around the world to landmark cities like Barcelona, Paris and Milan, with stops in Amsterdam, Zurich, Rome, Berlin, Dubai, London, plus the US and Canada still to come. Along the way, he will be joined by an astounding cast of friends with whom he has collaborated with in the past, including Audiofly, Guti, tINI, Loco Dice, and many more. In 2015, Buttrich is set to release a collaboration album in which some of the artists joining him on this tour will also be featured. We were just passed along a video from a recent show on this tour with The Martinez Brothers and Matthew Johnson, which can be viewed below that perhaps it will give you an idea of what a tour featuring Grammy nominated producer, Martin Buttrich, entails.

Martin Buttrich is about as accomplished as they come. At this point in his career, he has released on labels like Planet E, Cocoon, Poker Flat, received a Grammy nomination for his co-production work on Tim Maas’ Tori Amos remix, cofounded the label Desolat along with Loco Dice, and has remained a producer and writer for the label for over a decade.

Beyond this mega-tour, Martin Buttrich has even more on his plate in the coming months and 2015. In this exclusive interview below, we speak with the man himself regarding his tour, his forthcoming record label, new collaboration projects on the horizon and more.

01. Congratulations on are 20 years in the music business! I am sure it has been one hell of a ride. Tell us a little about your beginnings as a DJ producer? How did it all start and where were you at the time?

It all started when I was 16 years old and I stayed at a friends house. He had a keyboard and a computer with a program called cubase. I was just curious of how things worked.

I have been DJing at school parties and always loved music but my friend showed me the world of creating music, which pulled the trigger. Also my brother was into the whole Breakdance and Rap movement in the 80’s . I am sure he was one of the first in our town who had 2 turntables and a mixer. That had a massive impact on me as well.

02. What are some of the biggest changes you’ve seen in the DJ/producer world over the years?

When I started, plugins and things like Maschine or other tools with pre made sounds did not exist. It was all about sampling. Gear/equipment was insanely expensive at the time. Connecting to labels or artist when you are from a small town like Hannover was not easy.

All this has changed drastically. Connecting today is as easy as buying milk at the super market.

A young producer can manage easily to release a record when the vibe of his record is right as there are hundreds of labels and ways to publish your music. Clearly it’s not easy these days. In fact it’s difficult to monitor everything thats going on, which is another challenge, just in a different way. The electronic scene has exploded extremely and because of this, hundreds of microcosms created their own world & scenes. Today there are so many artists, scenes and genres, it’s impossible to follow.

There are so many different movements that all of a sudden pop up that I haven’t heard of.

I am a music lover and I try my best to keep track but it’s getting tough.

Everyone can make it nowadays as technology gives us the opportunity. That’s the big change. At least from the perspective of a music producer. I can keep on talking forever about this because there are some many facets.

Every place has its own charm that I get to experience when I am on the road. Obviously some places are more pleasant than others. Just picking 5 places wouldn’t be enough to show the whole picture.

But there are places where I get excited immediately, those that have flair and history.

04. Can you tell us some of the most memorable moments and achievements throughout your career thus far?

I think one of them is meeting Finley Quaye. Can’t go into details but it was a hell of an experience .

05. Tell us a little bit about the tour you are currently on. 20 cities running from September 20th to December 20th. What are some of the clubs and parties you most look forward to playing?

I look forward to all of them. Every city on my tour is a highlight. Last weekend I already played with The Martinez Brothers and Mathew Jonson. Both parties were on point. Rome, London or New York every place will be exciting. There is a place where I am extremely excited about, Detroit with Carl Craig all night long.

06. In 2015, you will be launching your new label. What is the inspiration for founding your own imprint? Can you tell us some of the artists you will be working with?

There is no plan for the label in terms of what I will release. ‘Collaborator’, my new album, will be released on Rhythm Assault, which is the name of my label. The label will be a permanent playground. I want to use it as a platform to showcase new projects. I don’t want any boundaries, but a home I can consistently  release my music on and other experiments.

07. In 2015, you will also be releasing your collaboration album project. What can we expect from this release? Who are the artists you have worked with to create this album and where and when can we hear previews!?

No preview at this point. The album is not finished yet and still in progress, but I’m very proud to have some of the finest artists of our scene joining me on this album.

08. For the producers out there, tell us some of the gear you can’t live without.

I have no favorites. I do have a few machines that are always running but I think even if it sounds boring the computer is my most important piece of gear.

09. If you could collaborate with any artist, electronic music or traditional, who would it be and why?