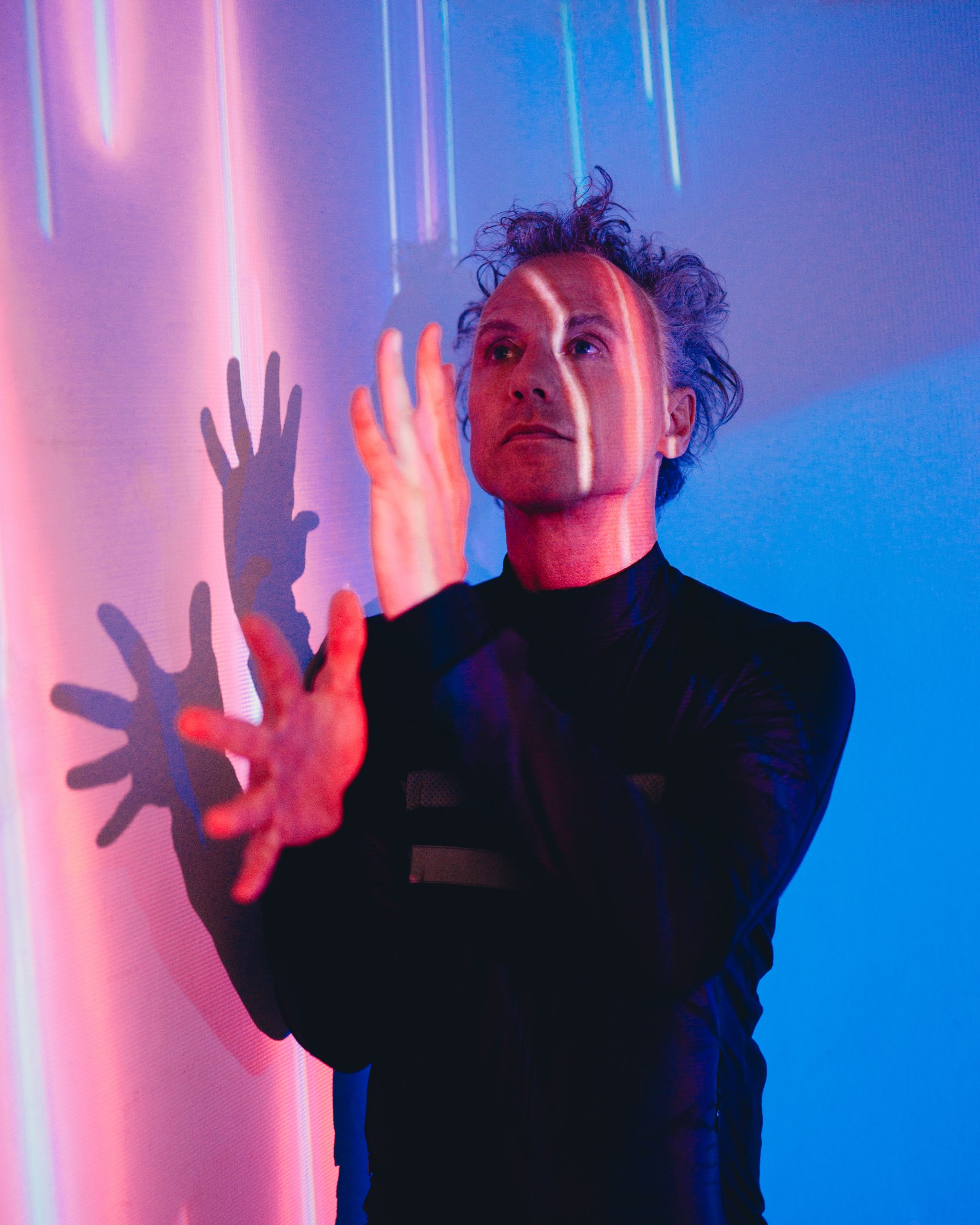 Hello NHOAH, great to chat to you! What has been going on in your world at the moment?

Nice to talk to you. I’m sitting in the studio right now working on my new album. Also, I am preparing a set that we want to film. Some friends should come around to join the event but that‘s not so easy with the newly emerging corona restrictions.

Can you give us some insight into how you originally got into dance music? What drew you to the sound? Did where you grew up have a big influence?

Haha, I think my answer is probably different from what you expect. ‘Dance‘ music drove me already crazy when I was ten years old. To close the curtains, put on the turntable, get out the 7 inches (i couldn’t afford any others), prevent other kids from putting on their records, was like a fever. We danced at least 10 times to the same songs. With my few records I was invited to every birthday. Coming home sweaty from the kids party in the afternoon was the best thing. That simply did not let me go until today.

What do you think about the current state of the dance music scene? What changes would you like to see within dance music?

I wish I could hear more new, surprising music and that it becomes unfashionable again to copy other producers. That’s pathetic. In the 90s, at least in Berlin, it was totally frowned upon to copy. No good DJ would have taken the same sound of someone else, you would have lost your reputation, your cool.

Unfortunately, only a few musicians take the time to work on a big strike because they are told this no longer works in times of streaming. The most exciting music at the moment comes mostly from young musicians who don’t give a shit about the business. Those who don’t become suppliers to businesses formed by the digestive tract of the notorious apps and still keep being musicians will make it. To them I call out: Stay that way!

Can you tell us about some of the best moments in your career?

So many wonderful things have happened. Mostly, it’s the embarrassing things that give me joy today. On the inner sleeve of the vinyl version of my album WEST-BERLIN, I wrote down a story. Few may have already read it but hell, the story is funny. So here it is once again:

It was with one of my first electronic bands. At that point my band had already played a mini-performance which worked out very well. But to be honest, we only had three songs. Although they were already recorded (on a four-track cassette recorder). Our manager asked me if we wanted to play a show in Antwerp together with Bronski Beat. To play with Bronski Beat and another band at a huge hall in Antwerp, that was a blockbuster! We started rehearsing but after a while we had to conclude that we cannot convert our demo recordings into live versions. With heavy hearts, we decided to make a full playback, mimic everything and let the music come from the tape. The alternative solution would have been to cancel the gig which was entirely out of question.   Every day we would secretly rehearse in the mornings because no one was supposed to be aware that we wouldn’t be playing live. If they would bust us, we would have been done. There was nothing more embarrassing for a band. Then, we were off to Antwerp. The hall with 800 people was completely packed and sold out. Beside our electronic instruments, we also had some gadgets, including a small hand circular saw. We planned to do a little sawing on the stand of the microphone during the show. In Germany, especially in West Berlin, there was a trend to create sounds with industrial tools thanks to Einstürzende Neubauten.

We were fairly tense due to the playback situation. Already after our first song, someone from the audience called out: “PLAYBACK!”. This was the harshest diss you can imagine. Fortunately, I overheard it, but none of my companions did. From the corner of my eye l noticed them suddenly acting stiff and robotic. The second song was the one with the circular saw. Jan, our singer, planned to saw at the microphone stand during the middle part of the song and if we were lucky, he would also manage to produce some sparks. But somehow he collided with a metal column that was standing in the middle of the stage instead, chopping into it full force. We were lucky the tool didn’t jump right out of his hands and fly past our ears. He succeeded, however, in producing a 15-meter-long shower of sparks which swept barely inches over the heads of our audience. If it had gone only a few inches lower, some people would have been at risk of going blind. After the song, there was the roaring applause we had hoped for. That was West Berlin, fuck the fact we played from playback! This was the primal power from the city they hungered for. Two guys and a girl on stage who almost had their faces torn up, totally hot.

Who are some of your favourite young producers / DJs at the moment?

Incident Prism, I Hate Models and some producers who may not be ‘young‘ but sound always fresh like Boys Noize or WhoMadeWho. Also upcoming artists from our label ‘R.O.T respectortolerate‘ . There’s a lot in our pipeline for next year.

What inspires you to create new music? What is the process like for you?

Honestly, the beginning is often torturous. I’ll be goofing around to get at least something out. Other times I have a strong text idea or a special sound or groove in mind. But then it’s possible what I implement will simply sound like shit. In short, there are no rules. But I always find a solution after a day in the studio. I won’t go home otherwise. I will go home at the very peak, when I start getting excited. That’s my way of working.

Recently, I work a lot with frequencies. Mostly with modular synthesizers. I also chant mantras but that’s too extensive of a topic for this interview. I can only say that there’s a lot more to music on a global level than we at first perceive.

Are you big into hardware? What is your current studio set up like?

I have many analogue devices that I love but I also appreciate digital possibilities. Many things that I would have wished for in the past are existing now. I remember that my first music computer only had rows of numbers that could be programmed. But this C-64 with floppy disks helped me to emancipate myself from musicians who had already forgotten all the riffs by the next rehearsal. That was a salvation.

But to name some of my favorite hardware: A ‘Fearn Compressor‘ or an ancient ‘Dolby‘ unit from multitrack tape recorders that has been rebuilt and can produce a fine sound glow are great. Also, a ‘Lexicon 480L’ reverb that I bought in the 80s and an EMT 240 ‘Goldfolie’ reverb plate. A ton of weight and fabulous in sound. Over the years of my production activity, I bought these highlights from their times. I bought them used. The EMT 240 plate e.g. is from Mousse T.. I truly don’t understand how he could sell this ugly but brilliant instrument. Maybe he meanwhile regrets it haha … This combination of special instruments defines my sound.

What is your favourite city to play in?

I don’t really have a favourite city to play. The vibe of each city is different but the enthusiasm of the people for electronic dance music is very similar.

After the shows, there are of course preferences. Seeing certain friends or musicians again, going for a swim in the grey of the morning or visiting good, simple restaurants. I can also highly recommend standing alone in unknown streets. It‘s inspiring and brings you back to yourself.

What is the best gig you’ve ever played and why?

I remember playing as a drummer at a festival in the sold-out Waldbühne in Berlin. Until then I had played in small clubs only, and suddenly there were 20,000 people in front of us. There were faces from the stage floor to the spotlight ceiling (The Waldbühne is built like an amphitheatre). I almost shit my pans. Suddenly somebody said GO and we’d all put on a hell of a show. Everything was too loud, distorted, the monitors almost made me deaf. I was sweating adrenaline. After what felt like 20 seconds, the concert was over. In fact, we’d been playing for 45 minutes. When we came off the stage we yelled at each other that we’d fucked up the concert. Much later, on TV, we saw that we’d played a great concert. I will never forget that feeling.

Are you working on anything else at the moment that you can tell us about?

I mean everyone has their own experience of the pandemic. At the beginning of the year my father died of covid-19. That was rough. For a few months, I couldn’t make music. I produced strange songs and was often sad in the studio. Nothing worth listening to for anyone else, just me and the vibrations. Then, music began to save me once over. It was healing. My pain and melancholy subsided and I woke up stronger.

Then, suddenly it all clicked into place. And now I’m really doing something new. The songs are just bursting out of me.