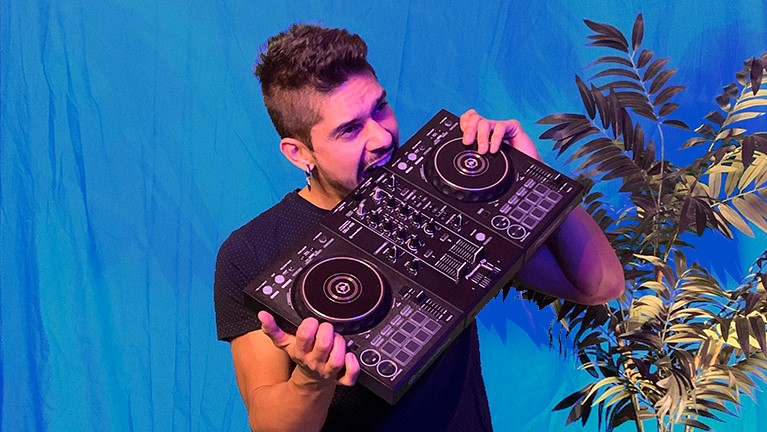 Will Martins, or just WLL, is a Brazilian artist that we hope to hear a lot in the international Dance Music scene. Based in Los Angeles, the artist brings touches of Brazilian swing to his compositions without sticking to a single style, moving between the dancing spheres of fun and refreshing Disco/Funk.

With good remixes and a number of singles that reveal the different and creative sounds experiments, WLL started 2021 with a good dose of energy in the studio, releasing tracks that bring tropical fluidity with a footprint that refer to the works of the duo Disclosure.

Thus came “ACAI”, “Sweet N’ Hour” and “Kinda of Funk” — all followed by brilliant and well produced music videos, as well as feats with names like LJ Smooth, Bradley Denniston, Eduardo Omondo, among other creative visions of different corners of the world.

We had a chat with the artist to find out more about his productive day-to-day life and his main creative inspirations.

Hi, WLL. How are you? Are you talking to us from Brazil or Los Angeles?

Hey! I’m still in L.A and I intend to stay out here [laughs], mainly right now that the club scene is returning.

When did this opportunity of moving to LA come about? Did you easily adapt to the city?

Actually, it didn’t come about, I created the opportunity. In 2015, I was working as a producer in São Paulo, when I felt something wasn’t right anymore, I needed to go a step further and develop myself more, not only professionally, but also personally.  I decided to apply for the Extension course in Film Scoring (Soundtrack) at the University of California, Los Angeles. A few days later I received the confirmation email saying that I had all the prerequisites and was approved to attend the 18-month intensive. I sold everything I had and by the end of 2016 I was already here in California.

There were ups and downs in the adaptation, family and friends were the most difficult, but today after 5 years I’m well adapted.

Was the California city that inspired you to jump right in with the musical works, or was it the other way around, did the music take you to Los Angeles?

Music brought me here. When I decided to study Soundtrack, I thought I had finally found my “path” in music. The funny thing is that since I arrived, my career as a producer was what took off more [laughs].

Before becoming a music producer, you already worked with advertising audio production companies in São Paulo. How was this dynamic and what experiences were absorbed from this area?

Working with audio for advertising was one of my biggest schools in music. That’s where I learned to refine my “taste” and agility in producing. Many briefings we received were, if not overnight, on the same day. In addition, you learn how to let go of your creation, and let it go the way it was created. You understand that the song is not yours, it’s from the commercial, from the movie, from the trailer. It helped me to become a better artist in general.

When you started your project as a DJ and producer, what were your main sources of inspiration at that time?

Well, I started WLL as “IWIL” in 2015, back then Disclosure and Madeon were my main references. Right when they released “Nocturnal” and “Adventure”, respectively. My music was super Complextro/Electro [laughs].

How about your current career moment, these references have changed a lot?

I think so, naturally. Today I’m more aware of what’s going on in the House and Pop scene. my roots will always be in the same place, no matter what my current references. Funk, Soul, Disco, Jazz…. Black Music in general.

You enjoy going through different styles, taking Brazilian swing to your identity. What are the artists in Brazil that you recommend for those who don’t know much of the scene…

Oh, Brazil is one of the best melting pots of musical geniuses I know, and I feel very honored to have had the opportunity to grow up listening artists like Banda Black Rio, Marcos Valle, Djavan, Gil, Moacir Santos, Toquinho, Jobim, Vinicius de Moraes, Rita Lee, Mutantes, Gal Costa, Elis… I could stay here all day…

Your latest releases bring a well-identified and creative sound personality, whether on the tracks themselves as well as on the music videos. What’s the secret to the impression of a strong identity, even being more Pop?

I guess the secret is to do what you want to. Whether Pop or Indie, I think it’s just the result of ideas. I never thought “Oh I’m going to do this because it’s going to be more popular, or sell more”. For me, art always comes first. When I think about the visuals, it’s basically the extension of the work. The track itself is only 50% of the total, when my team and I plan the videos, visuals, artwork, it’s like we’re finishing up the other half.

About your latest work with Eduardo Omondi, in “Losing Control”. Tell us how the creative process of this track was? How do you define the names to collaborate on your compositions?

It was awesome, mainly because it was my first personal interaction with someone in my studio after the US reopened. Being able to direct someone and exchange ideas in person made all the difference.

My choices are totally random, and to tell you the truth, life kind of brings these people. Eduardo, for example, we met during a gig I was attending as a DJ, Issa appeared on my feed and I got in touch, Anna Carmela, a friend who introduced us.

Now, talking about music videos, are you the one who conceives the thematic idea and the script for each video? Do you take this as a rule for every release you make?

WLL: Yes about the idea, but the script happens according to the available resources. To ACAI for example, the director BNTZ created the script, I just gave the general idea. To Kinda Funk, I had an idea, but when I arrived at the filming studio I had to deal with some limitations…

I try to create something visual for every release, even if it’s a video shot on the iPhone of me dancing or playing my music live. People consume music with their eyes these days, and having no visuals is wasting too much of the track’s potential.

And regarding the news to come, is there new music on the radar? We even saw that you had a gig over the weekend… was it your first gig after the pandemic?

Yes! I have 4 tracks coming out. I had a plan to release them in 2021, but I had to delay, all in favor of a better release for each of them.

Performing again was awesome! Exchanging with the crowd, and getting instant feedback on the things that are working in my songs was the most special thing to me.

Still on the subject, how is the current moment in LA nightlife? Can you already say that it’s 100% back to normal or not yet?

It’s hard to say 100%, I would say 80%. Many clubs are still with limited capacity, checking vaccination (which is more than necessary) and some canceling nights due to lack of people. However, it is already better than at the beginning of this year, when nothing was even open.

And with the end of the pandemic, what are your biggest goals in music? Thank you and success!

Having at least 1-2 shows per weekend, in different clubs, in other states and maybe countries. I want to get to the end of 2022 with 20 tracks released by WLL, the rest it’s just history [laughs].