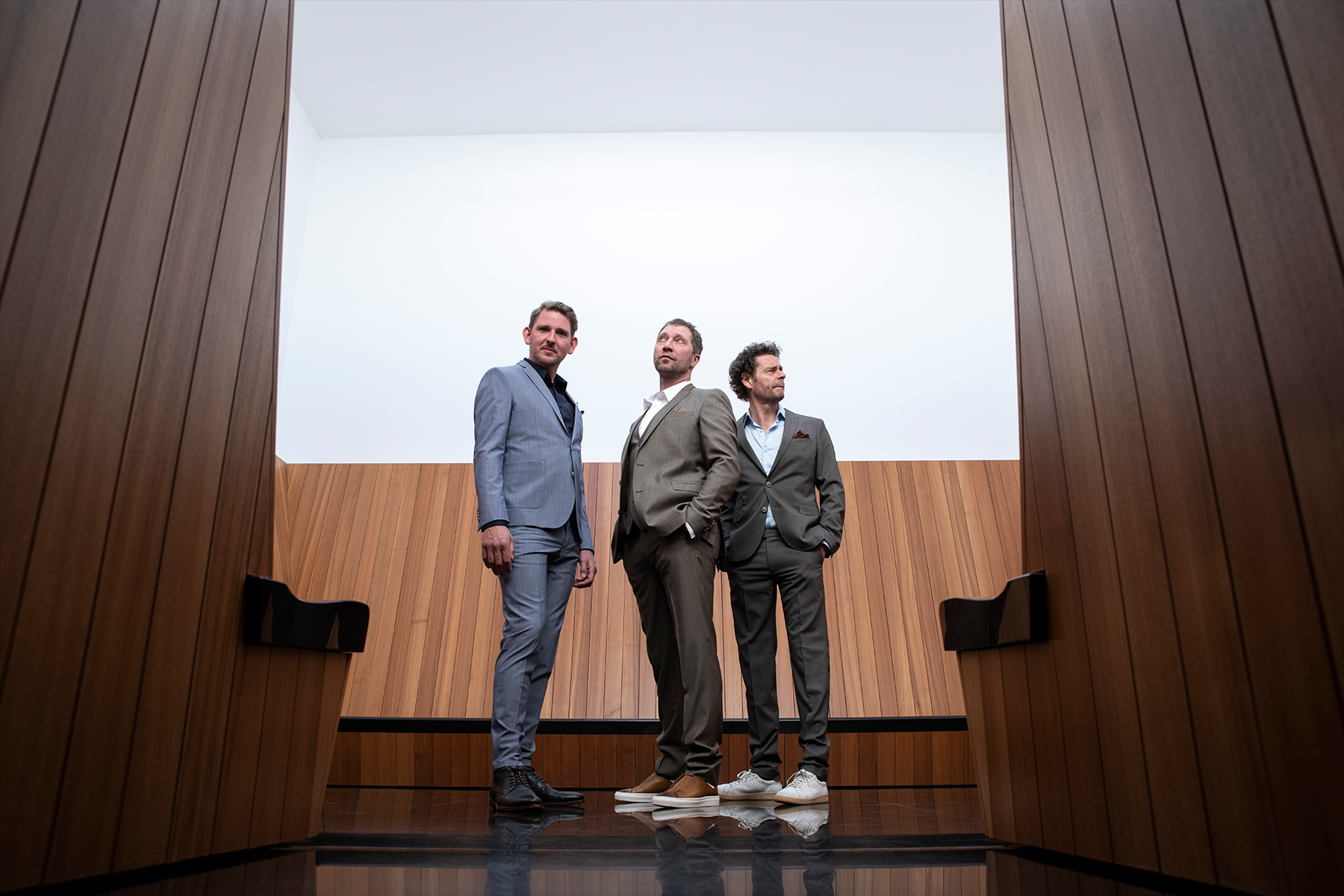 Disco-funk blasters Kraak & Smaak turn up on schedule with their newest iteration, ‘In Plain Sight’, featuring in-house live vocalists IVAR and Berenice van Leer. The release also comprises a pair of reworks from skillful, been-round-the-block vibist Rodney Hunter, a staple element of Kruder & Dorfmeister’s G-Stone Recordings and his own label Hunter Recordings, and like-minded Dutch outfit, Fouk, signed to Heist and releasing on their own label OUTPLAY, equally versed into the art of the remix and whose back catalogue includes some recent notable revamps for Groove Armada, Detroit Swindle and Joey Negro.

We were blessed with a chance to chit-chat with the guys about this stellar release, and the catalog they’ve been brewing up on Boogie Angst. 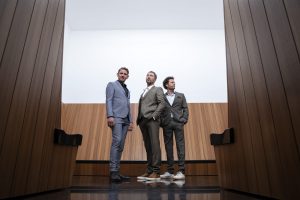 1.) Another pretty cool release here from you guys, congratulations. What can you tell us about the making your new release In Plain Sight / Naked?

Thnx! They are actually two of our fave tracks off our recent ‘Pleasure Centre’ album, and given the positive feedback we got on them, both via the album, but also at our live shows, we really thought it was time to drop these gems as singles, accompanied by some great reworks tailored just for the dance floor.

2.) Incredible vocals from both IVAR & Berenice van Leer. You’ve worked with these guys a lot. What is it about both vocalists that works for you?

Both Ivar and Berenice have been our highly respected, main live band vocalists for quite a few years now, and fans know that we recorded with them before as well, for 2016’s ‘Juicy Fruit’ album, but also for a few one off tracks we did for Razor ‘n Tape and Spinnin’ Records for instance. The great thing about them is that they are both very versatile in their singing and stage presence, making them ideal for the live band and the sound system dj set, as the overall K&S vibe is quite diverse and in one show set flows from disco to house and from funk. Both are also very easy to work with in the studio, and always nearby, and recording with them has always felt like a natural process. Moreover, Ivar is a great songwriter too – just check the songs at hand here, but he’s also able to write for other people, which comes in very handy when we work with other featured vocalists that don’t have that talent (as, unfortunately, it’s not a god-given fact that a good singer makes a good writer, and vice cersa).

3.) The remixes of Rodney Hunter and Fouk work so well. Can you tell us about why you chose them? What is it about their style that appeals to you?

Yes, we really got good support on these. We really liked Rodney Hunter’s recent work disco-ish house releases, somewhat similar to the output of Mousse T and Purple Disco Machine, and from before that, when he was at G-Stone. We felt that ‘In Plain Sight’ could really become big room disco house anthem if worked properly, yet still keep it musically interesting so to speak, and he totally delivered. Fellow Dutchies Fouk on the other hand, have been mates for a long time, and we always tend to go back to them if we need more deeper remix vibes. Over the years they delivered some tasty remixes, like the reworks ‘Way Back Home’ and ‘Smile’, off Juicy Fruit, which we still play out to this day. I guess we share a similar outlook on what we both produce, and it’s always a pleasure to involve them.

4.) You’ve been curating a very dynamic and versatile catalog with Boogie Angst.  Can you chat about the process in which you pick the releases and the artists?

It really is all about keeping in touch with today’s sounds and keeping your feelers out for new talent; browsing and listening to Soundcloud, Spotify, etc., to try and filter upcoming artists, whether it’s a band, a producer or a vocalist. We’re not the biggest of labels, so we need to be around before the big guns come in, and sometimes it works out and sometimes it doesn’t. For example, for K&S we were able to work with Parcels, just before they got big over here, and with the current album we have fresh new names such as The Palms, Izo FitzRoy, Satchmode and imugi. But in the end it all starts with feeling it; above all, something needs to grab you right away. This is not to say that we don’t look at other, more ‘established’ artists we like, but more often than not they are just too big for our profile. Still, we had some awesome collabs over the years, with Ben Westbeech, Mayor Hawthorne, Lee Fields an the sadly passed away Romanthony to name a few, so we’re not unhappy at all.

5.) Several months now into the quarantine. How have you three been passing your time?

Actually we have been quite busy! Unfortunately not gig-wise (most of our live and dj shows have been postponed or canceled to later this year, or early next year), but for one thing we’re in the middle of commissioning and collecting remixes for the ‘Pleasure Centre Remixed’ album. Besides, the label is going very nicely and this year we have a high tempo of releasing stuff anyway. Moreover, as K&S we have done a lot of remix work lately, drop one or two one-off originals, plus thinking already about the next steps post-Pleasure Centre: are we going to work on a new album or do we stick to one-off tracks for now?  We have the weekends off now though – that’s a new one for us!

6.) How have you been managing to work together while apart?

It hasn’t been a major thing for us tbh, as we don’t work together in the same physical space all the time anyway; lots of daily K&S and label stuff can be done online or by video calls elsewhere. The same goes for sending around demo’s and listening to new material for feedback, etc.

7.) The musical landscape is changing post Covid. Has it affected the label? How have you adapted?

You might say that the label’s focus has always been slightly more geared to the streaming side anyway, but we do keep the current situation in mind when we sign new material. So less dance material, only if it’s really, really good, and less ‘let’s try this out’ releases, etc. We need to keep both K&S and the label financially heatlhy of course. However, we still want to deliver for the clubs (although the timing is not the best with everything closed) where possible, and I think BA in that regard is somewhat similar to our K&S approach: we have always wanted to do both and we continue to do so.

We assume that our  live show and dj set agenda will continue to be more or less empty this year, although we are doing a few ‘cfully ovid-adapted’ dates this Summer and beyond. And as mentioned earlier, we are busy compiling a ‘Pleasure Centre Remixed’ album, to be released at the end of the year, containing both earlier released remixes and totally newies. Most of the latter ones are in now  – actually way too many as we got a bit too enthusiastic, lol. In the next few months, before dropping the full album, we’ll already release a few of the new ones, either alongside the original tracks or as stand-alone releases, and a 2nd remix sampler vinyl picture disc is also in the making. Furthermore, recently our remixes for Yuksek’s ‘Rollercoaster’ and Jean Tonique’s ‘Too Bad’ got released, as was a one-off exclusive for Toolroom and remixes for Adeline and Miami Horror f e. And there is still more to come with an exclusive track for the Too Slow Too Disco compiulation series, remixes for Blank & Jones, Pezzner…and so forth. All this, and together with all the BA releases still to come, starting to develop new K&S material for the future, etc., I’m sure there will be enough stuff to do, release and communicate about