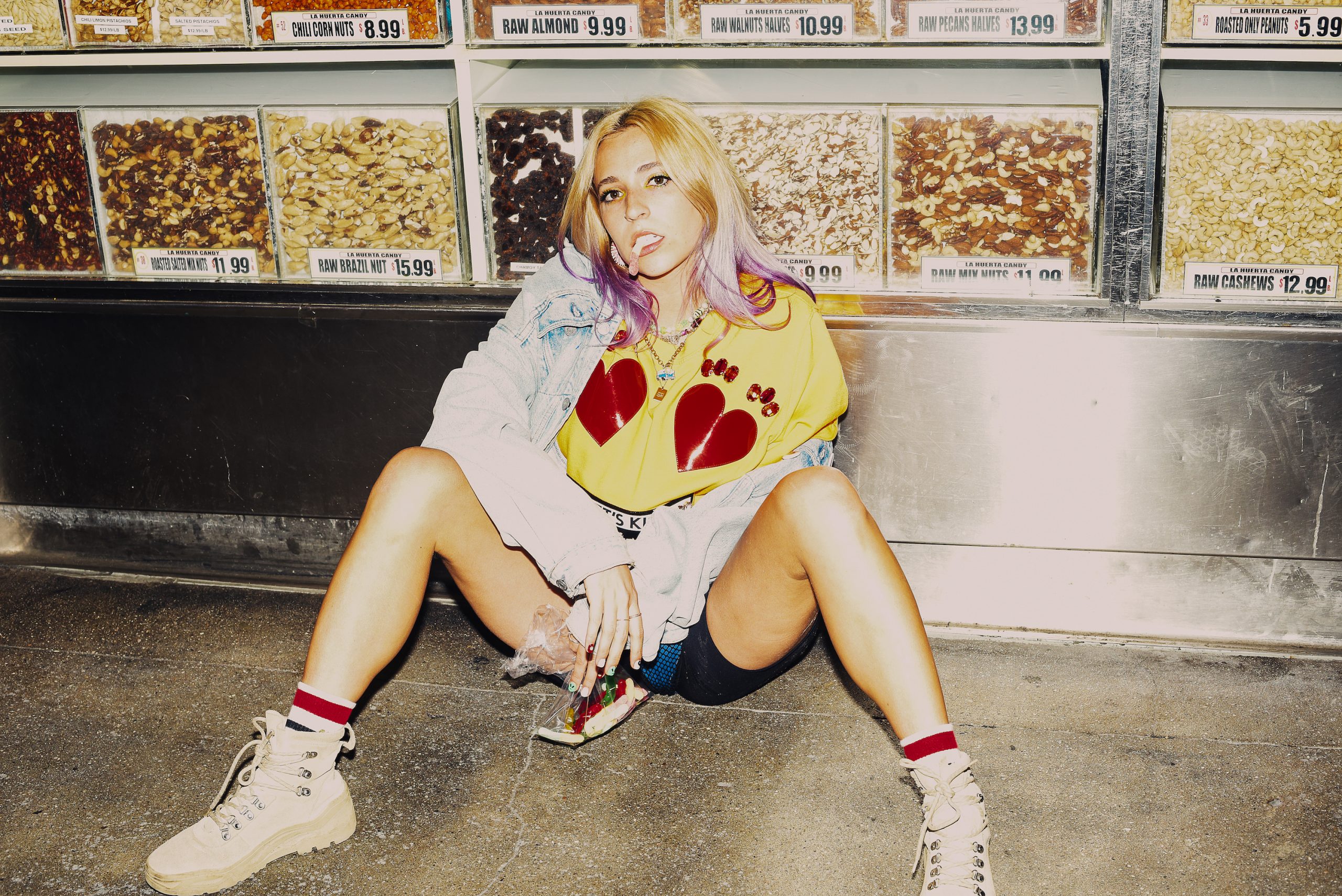 PENNYWILD has directed music videos for Zedd (watch) and RL GRIME (watch), choreographed shows at The Hollywood Bowl and Lollapalooza, performed on Broadway in West Side Story, and toured internationally with the musical. She has also DJed at festivals like Coachella, SXSW, Splash House, and Lightning in a Bottle. PENNYWILD’S NIGHT PEOPLE EP will drop via Popgang Records on Friday, November 5

“DOLLARS, DOLLS, DRUGS” is a contagiously upbeat Queer anthem and acts a slice-of-life peer inside the wonders of authentic, sacred nightlife performance spaces narrated by some of NYC’s most influential mugs of drag. 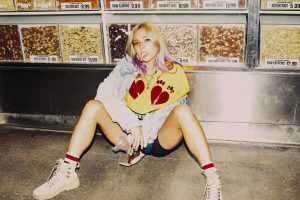 Tell us about your production process behind the NIGHT PEOPLE EP.

During lockdown, I found myself eerily nostalgic for my “glory days” (aka 2016-2019, when I was exploring the queer/ electronic music scenes in NYC and LA). I would catch myself staring at a half-fleshed out project in Ableton, and all I wanted to do was add crowd noise, random adlibs, and field recordings of soundbites from friends I had collected over the years. This made one thing clear – like most other people I knew, I missed dancing; I missed going out.  Frustrated at the lack cohesion of the sounds I was playing with, I decided to start from scratch and capture some new chatter based on very specific prompts/ concepts. I would “interview” friends over Zoom, and ask them to role-play different stages of our shared nights out. What resulted was 3 GBs of dynamic, interesting, and hilarious one liners from friends. I spent a lot of time re-arranging them to make any sort of narrative sense, and the sonic palette of NIGHT PEOPLE was born.

What’s the story behind DOLLARS, DOLLS, DRUGS?
Drag culture & shows have been a part of my life ever since I can remember – as early as being fourteen years old sneaking into Manhattan’s infamous LIPS. The art form has always been one I deeply admire & respect, so when it came time to land the characters at an event, a climax, some sort of high-energy function, it was obvious to me that they’d be attending a drag show. Not to mention, I wanted the arc of this project to directly mirror my personal life, and this would accomplish that best. After many conversations with people I consider to be the fabric of queer nightlife, it became clear that I needed to amplify the idea that in order for us, the audience, to enjoy the drag shows, we had to put our money where our mouth was, and show some respect for the queens – TIP THE TALENT! And thus became the chant: “Lay your dollars on the dolls”. LA based artist/queen Jonnie Reinhart leads this sentiment vocally, and it couldn’t be more authentically fitting.
What was your inspiration behind “SIDE STREETS?”
The inspiration behind this track was born out of a larger conceptual idea from my forthcoming project, NIGHT PEOPLE. The full “concept EP” follows a gaggle of clubgoers as they embark on a typical night out, and naturally getting into the Uber/Lyft from the pre-game is an integral part of that. I’ve always found that a common highlight of these outings is getting from the pre-game to the event – spirits are high, everyone is anticipating the fun they are about to have, so much about the evening is still unknown, the group is still energetic & has their wits about them, etc. There’s really nothing like the palatable energy you feel in that exact moment in transit, and I wanted to create something that incapsulated that both contextually and sonically.
What’s your advice for queer people and/or women in music?

I think anyone that belongs to a marginalized group can and should absolutely ignore any bias they’ve been previously exposed to or limitations others have bestowed upon them, and walk confidently in the direction of their dreams/passions. It’s been proven time and time again that some of the most influential and iconic artists of our time have had to work through mounds of adversity, and have still managed to make the very greatest mark on their field. I think there’s something powerful about not having the easiest road to success, and I think it is of utmost importance to try and drown out the incessant hateful noise in order to get your work out into the world. Just keep going!

How do you balance your time between choreographing, directing music videos, producing and DJing?

Very poorly! Haha. I always joke that the Libra in me refuses to let me focus on merely one avenue – it’s always a balancing act, and it’s never perfect. I am not my fullest self without one of those disciplines, and so the difficult reality is that I’ve got to just continue to perfect my time management skills. Staying organized really helps — if I have everything written down,(deadlines, cast lists, production teams, etc) I’ll rarely let a detail slip by me. I am really passionate about what I do, so I don’t mind all nighters and long set days. Managing these various mediums can be challenging, but it also really fuels me to get through the next project.

Did a younger you see yourself in the place you are now?

Young Penny definitely saw Adult Penny working in entertainment, but I don’t believe she had this precise vision for what she’s up to now! I always saw myself living in New York City and dancing on Broadway. I lived that life for a few years, but ended up moving out to Los Angeles shortly thereafter to pursue a multitude of other artistic avenues. Although my current life isn’t exactly a mirror image of the one I initially saw for myself, I’m ultimately more fulfilled than I think I would be, had I stayed true to that first road. I started to feel a bit trapped in one career path, and as soon as I gave myself permission to stray from the vision and follow my bliss, I felt a lot more liberated; things started to really click.

Do you have a proudest moment of your career?

You know, I get this question a lot – and I’m never quite able to cite one specific gig, performance, shoot, or accolade. As cheesy as it is to admit, I think the moment where I really thought to myself “hell yeah” was when I finally admitted to myself that I actually wanted to be a Director. It took a little bit of trial/error, but the moment I was approached to start really doing it professionally, was the career affirming moment I was subconsciously waiting for. A similar moment occurred when I realized I wanted to really peruse the Artist/DJ thing a few years prior. I never gave myself permission to act on those desire as a teenager, but as soon as I felt artistically liberated as a young adult, everything started to make more sense. I’m proud of my recent ability to just say “yes” to myself, regardless of my experience or situation.

What is the thing that you’ve done (directing, choreographing, djing etc.) where you learned your biggest lesson?

In 2018, I was the Associate Choreographer for the musical ANNIE at The Hollywood Bowl. We had ten days to mount a giant beast of a show complete with child actors, a professional stage dog, celebrities, the whole nine. My job as the AC was to make the Choreographer’s job as easy as possible by working on pre-production, drilling the children’s choreography, leading warm-ups, and generally assisting the creative team with any and all obstacles/ decisions. There was something about working with children in that stakesy of an environment (big venue; zero rehearsal time) that really activated my tunnel-vision “leader” approach. Ever since that summer, I’ve found I can very easily access that “work efficiently, but warmly” technique that I picked up on from my fellow creative team members. It was a whirlwind of an experience, and I use the lessons I learned from it in everything I do today – whether it be writing, producing, directing, choreographing, dancing, singing, organizing, etc.