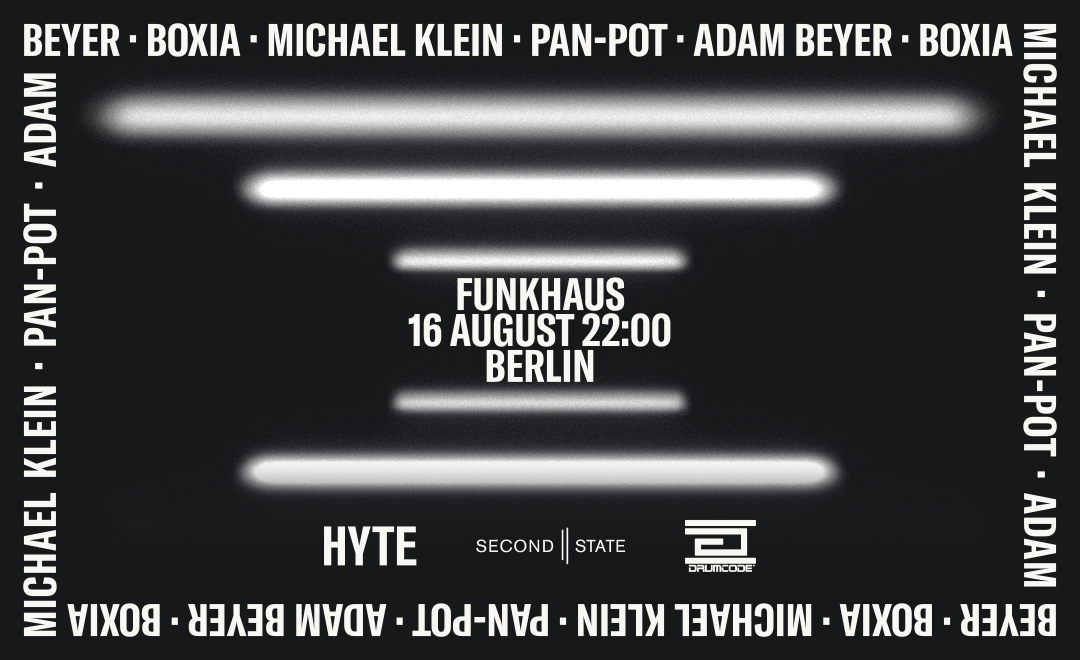 Berlin-based festival promoter HYTE unveils the first in a new series of warehouse events in their hometown on Friday 16th August.

The new HYTE series will launch in formidable fashion with performances from Adam Beyer and Pan-Pot, both revered scene leaders who will be representing their respective Drumcode and Second State imprints.

HYTE has assembled a formidable cast for the launch of its new Berlin-based series that promises to rank among the organizer’s finest yet on its home turf of Berlin, set in Room Two of the tremendous Shedhallespace within the grounds of the famous Funkhaus complex.

Shedhalle is the same celebrated venue that hosts its annual HYTE NYE marathon, and equally, the debut of the new HYTE warehouse series is poised to deliver the same calibre of powerful event experiences that has established its annual NYE marathon as a festival essential.

Swedish veteran Adam Beyer has enjoyed a formidable career amongst the techno-elite, standing tall with his revered Drumcode imprint as one of the scene’s most enduring figureheads for more than 20 years. Further still, he’s currently enjoying an unprecedented level of success with audiences around the world that even eclipses anything we’ve seen to date in an illustrious history stretching back to the genesis of techno in the early ‘90s.

This month’s DJ Mag cover story dives deep into the Adam Beyer legacy, who is described as “techno’s uncompromising kingpin”. It explores how this same uncompromising attitude helped launch Drumcode, and its artists, onto some of the world’s biggest stages. Meanwhile, Drumcode itself has developed into one of the world’s most widely recognized techno imprints, renowned worldwide for its trademark sound: “big, booming basslines, slow and funk-driven techno rhythms and dramatic melodies and breakdowns.”

Expect similar big-league support in the form of local techno icons Pan-Pot, with the powerhouse duo poised to offer that distinct Berlin flavour to the event. A fixture in their hometown scene since the turn of the millennium, they’re responsible for their own fabled Second State imprint that this year hosted their ‘Radio Berlin’ EP plus releases from the likes of Amelie Lens. Representing HYTE in every corner of the world, Pan-Pot will ensure the requisite Berlin muscle is present for the launch of this new warehouse series.

Joining the lineup will be a curated selectionof favourites from each imprint that begins with Boxia, a UK artist who’s just released his debut lbum A Night In The Life Of on the label. More heat comes from talented Second State favourite Michael Klein. Expect dark and groovy basslines alongside hypnotizing blends from this Frankfurt-based Second State staple.

Stay tuned for news and updates as HYTE prepares its next generation of Berlin warehouse events.