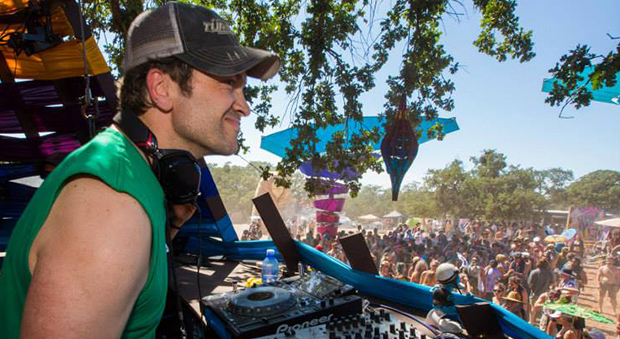 Sammy, along with co-creator of the Woogie stage Jesse Wright, have assembled and nurtured a cultural phenomenon at The Do LaB‘s trend-setting gathering. What started out as a few close friends playing music in a tucked away outdoors spot in Santa Barbara has transformed into an iconic event with tens of thousands attendees.

The Woogie stage at LIB has increasingly grown in popularity in recent years of the festival’s existence; so much so that this year The Do LaB launched an entirely new festival branded around the stage–Woogie Weekend. The inaugural event hosted a ton of great artists: Bedouin, Camea, Danny Daze, Francesca Lombardo, Fred Everything, Henry Saiz, Jonas Rothsman, Luca Bachetti, Marques Wyatt, Moon Boots, Nick Warren, and of course a Woogie favorite Lee Burridge. Woogie Weekend was a huge success!

Sammy Bliss is by far one of the nicest, hard-workingest, fun-loving people in the west coast festival circuit; and what he has built with the Woogie team is an incredible feat that has created countless unforgettable moments in the minds of many, many people. Add that to being an inspirational father of two and devoted husband and you get a Heroic figure that will go down in the history of our beautiful culture.

Enjoy Sammy’s live set recorded on the Woogie stage at this year’s LIB festival. We were there–you probably were too.

Thanks for taking the time to chat with us.
Yeah man, thanks for the invite!

How did you get into DJing and house music? Was there a specific moment of inspiration or was it more of a gradual process?
Ever since I was a teenager I remember wanting to learn to DJ.  I loved music so much, I couldn’t get enough of it; it was all I wanted to do.  I actually got a gig as a teenager DJing this little restaurant/bar out on the East end of Long Island, where I grew up, playing classic rock off tapes and CDs, but I also loved the 80’s hip hop and was enamored with the idea of getting turntables.

I moved to LA when I was 20, and shortly thereafter got a job with a DJ company, doing weddings, bar mitzvahs, corporate events and such.  While it didn’t exactly spur the creative juices, it did give me a sense of flow and got me familiar with the very early, rack mounted CDJs.

Then somewhere around 2002 I met Jesse Wright, we started throwing parties together, he, Cody Lee and I started our little DJ collective Pocket, and, with this inspiration, I finally went down to Guitar Center with a credit card and bought my Tech12’s. . . my life was never the same.

How did you link up with The DoLaB? What’s the history of the Woogie Stage at Lightning in a Bottle?
I met Josh and Jesse Flemming back in . . . I dunno . . . maybe 2001, give or take, through a little tribe of awesome valley ravers called the Orange Kids.  As time went by they started creating art and throwing parties, both of which grew bigger and better with each passing year, and they dubbed themselves The Do LaB.  Then in 2006 I got a call from Jesse Flemming saying that they were throwing a little festival up in Santa Barbara called Lightning in a Bottle and would we bring up our speakers and play some music.  To which, of course, Jesse (Wright) and I replied “FUCK YEAH!”

We brought our speakers, and an above ground pool (instantly dubbed the Pocket Pool), and The Do LaB built us a little shade structure that looked like a large sombrero, which we aptly named “The Sombrero.”

Each year after that The Do LaB asked us to bring more speakers, which we did, and we started booking DJ’s, which started out as all our friends and local heroes, and has morphed into the monster Woogie it is today.

Woogie Stage at Lightning in a Bottle 2006

How has the recent onslaught of festivals poppin’ up affected LIB? Where do you see the festival in 2020?
I think the onslaught of newer festivals, and newer crews, is awesome.  LIB, as a festival, holds a certain amount of responsibility for the birth of all the newness.  LIB has probably had the largest positive impact on festival culture of any festival, and a lot of good has come from it.  Remember the rave act and all the drama that stemmed from it around a person’s right to dance and party?  Well, the Do LaB was at the forefront of what was to make that a part of history.  They imagined a new way that we could express ourselves, to dance and romp untethered, exploring the deep connection to music while also having a positive impact on the people and environment around us.  It’s changed everything!

I’m not saying the Do LaB, and LIB, originated the “conscious festival” or was the sole inspiration for change, but they worked their asses off, tirelessly, calling in favors, maxing out credit cards, hustling, building and continually striving to be better and aim higher . . . and here they are.

I can’t begin to imagine where LIB will be in 2020 but I can guarantee you that the Do LaB will continue to push the envelop of creativity and work year after year to create an environment that fosters magic and instigates shenanigans at every turn.

What’s on the horizon for you the remainder of 2015 and beyond?
My life is mostly centered around my family nowadays.  I still play out when the right opportunity arises but otherwise I bask in the warm, mildly chaotic glow of parenthood and snuggling with my girls.

Dream gig…
My dream is to raise my girls with the same ideology and ethos that we’ve all worked to create in experiences like LIB.  Partying is super fun, but when the lights come on you’re left with the impact you did or did not make on the world, and I think that’s one of the most valuable lessons one can teach in this life . . . positively impacting others.

What’s one track in your crate that gets the party poppin’ every time?
Paperboy (D-Nox & Beckers Remix) – Lutzenkirchen  #classic

Tell us about your mix…
So this is my mix from Lighting in a Bottle 2015, this past May.  It was Sunday, Jesse Wright opened the day with 2 hours of lush, funky, deep mid-tempo housey goodness, and I followed.  I decided I wanted to get people moving . . . it was the last day and I wanted to start it off fun, but I was also inspired to dust off some of my old classic tracks, just ‘cuz.  So the first hour I spent playing newer tracks, bringing the energy up and connecting with all the beautiful people (my favorite part of DJing).  Then ½ way through I stopped and changed gears, took everyone on a pretty little left turn, then dove into some of my favorite old tracks from 6-8 years ago, electro before anyone was really playing electro.  I got to drop the super classic remix of Tigerskin’s “101 on the Run” (Senora on the Run) by Nick.the.Nick (aka Pumpkin), then Nick ran up to the booth and we danced and bounced and screamed like schoolgirls . . . just like we used to.  It was magic!

Drink of choice…
T&T with two L’s . . . Tequila and Tonic, with two limes, squeezed and twisted.