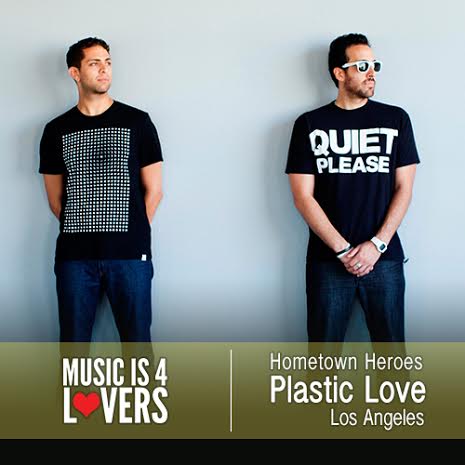 The Plastic Love duo have had their hand in the LA scene going on 5 years now, and as their all-encompassing brand grows, a dedication to quality, tasteful artistry remains constant.  Branching out as a record label this summer, Bas Elgharib and Jimmy Maheras are ready to represent the city they love, bringing timeless beats to various venues and revealing an authentic sound to the musical ranks.  Get to know them a bit better while you listen to this groove-driven, sunshine infused mix <3

D: Thanks so much for being here gentlemen :] Why don’t you brief us on your musical backgrounds to begin…
B: I started playing instruments when I was younger, like the piano and drums. Was a drummer all through high school in the marching band, orchestra, jazz band -more classically trained stuff. When I was a junior or senior a friend and I bought turn tables together and I decided on DJing.
J: Yeah, I got into house music pretty early on from growing up in New York and listening to it on the radio. Went to Greece in ’94, went clubbing and would come back with mixtapes and me and my friends were obsessed at that point. But I didn’t start DJing until college and then…here we are.

D: Here we are! So how did you guys meet?
B: We met for the first time for Basic at King King through mutual friends and Jimmy was kind of a resident there but we ended up playing a few times together and hanging out. And everyone in this city is friends so we kept running into each other.

D: And pretty soon on recognized your similar tastes?
J: Yeah I was also DJing the patio at Vanguard about once a month and I was playing like 5-6 hour sets so started to invite Bas to come play. And then after that, we started a residency in the second room at Avalon for a while and that is basically where Plastic Love started.

D: Ah yes, how did you come up with that name?
J: Bas really likes dolls…
B: Funny. I originally wanted to take the name Plastic People as the club in London was going to stop throwing parties and Jimmy said ‘That’s a terrible idea!’ but I wanted to wait it out…obviously, they didn’t go out and we were trying to come up with a name and I wanted to use ‘One Night Love Affair’ and my wife just said ‘What about Plastic Love?’ It stuck, and relates back to the logo which is a heart shaped vinyl….That is a really big part of what we are both passionate about as DJs as there is still a ton of material that you cannot find digitally along with years and years of music on vinyl that still doesn’t get touched or heard.

D: Awesome. I am guessing throwing parties together happened very naturally then?
B: Yeah we saw an opportunity to play a lot more often and make an actual promotional entity out of Plastic Love that could be all encompassing.

D: How did your first party go down?
J: That first party was awesome! We had Brennan Green come out and that dude killed it.
B: Yeah we were lucky cause there was a huge headliner in the Main Room that night, and the way Avalon was designed there was a bottleneck that went from the Honey Lounge to the Main Room so people would basically get stuck at our party and it was like…GOTCHYA! So at that point it was monthly, booking friends of ours like James Friedman, Justin Sloe and Jeniluv.

D: When did you branch out of Avalon?
B: Think it was after about a year because the first party we did outside of Avalon we brought Ame at King King and from then we just decided to keep going.

D: Love Ame. Must have been a great show. So, at the beginning of Plastic Love you had a future label in mind which is just starting to take shape now. What is your overall concept as far as the sound and prospective artists?
J: I don’t know if we have an exact sound, but it is definitely going to represent LA. One of the main goals is to push LA artists because we feel like we need to take the next step and have a lot more music coming out of here.

D: Right? Not sure anyone associates LA at the moment as heavily production based.
B: Yeah, and there are a ton of talented producers here and many tend to live here for a bit and go to Berlin or somewhere in Europe and cut their teeth out there. But yes, going to find LA producers and hook them up with up and coming artists out of Europe to do remixes-and vice versa. Even the artist who does our label artwork is based in LA, Ian O’Phelan who is doing all the artwork for our flyers now as well, trying to keep it all really consistent. We have both always appreciated art and that is a lot of the reason we want the label to incorporate vinyl, something tangible.

D: Important facet for sure, and I hear your first release will be out next month by Jimmy himself?
J: Yeah, the A side is pretty spacey and one of my personal favorites because I used all my hardware synths on it, and then I made a weirder, Kraftwerk-esque track for the B Side. I’ve known Timothy J Fairplay for a while and when we got his remix back first it calmed my nerves with starting the label because he really killed it. Cottam’s remix is fantastic as well.

D: Well I cannot wait to hear the final product. Back on the LA tip, do you think you will stick to the concept of breakthrough artists rather than more well known names?
J: I’d really like to do a mix of both. I think the best way to run a label is to have a core group of artists, but would love to get an EP from a bigger LA producer somewhere down the line if it makes sense.

D: Cool. So what kind of sounds have you been drawn to lately?
B: The two of us have definitely been getting into more aggressive, rougher sounding house and techno. Guys like Boddika, Joy Orbison, George Fitzgerald, Paul Woolford and Midland have that percussive edge…think it is about time we start playing rave music again because people want to rave! Gets too light and fluffy sometimes.
J: Yeah I have become unhappy with some aspects of the scene and I think that combined with shopping at Mount Analog have me drifting more to analog-sounding tracks because those are the ones that won’t sound old in 2 years, 5 years, even 10 years. If you can tell when something was produced…it’s probably not gonna last.
B: “That’s soooo June 2004”

D: Hilarious…what’s up on your party circuit?
B: We have 2 parties coming up in LA and are playing an afterparty at Movement in Detroit on the 26th with Voices From the Lake, Anthony Shake Shakir, Pittsburg Track Authority and more. On Sunday May 18th we are bringing Horse Meat Disco and Move D along with ourselves and Jeniluv in collaboration with JACK…and I guess it’s kind of our birthday celebration as well-I think that was actually our motivation to throw our first party. And the next one is on June 6th, we will be doing a warehouse party with in collaboration with JACK again bringing out Steffi with Modernluv which is Jeniluv & Moderna.

D: So looking forward! How is summer shaping up? Going overseas at all?
B: Yeah, actually our last Anonymous Love party with Juan Maclean was an official pre party for Secret Solstice Festival in Iceland.

D: Ah, the sun never sets right?
B: Yeah it’s gonna be 3 days of sun! And the guy who is throwing it has been a friend of ours for a while and he wants to have a series of launch parties all over the world. I believe they had one in Coppenhagen, New York, Manchester, London and we were the LA leg.

D: Super exciting! Well, thank you so much again for chatting and letting us get to know you both a bit. Cannot wait for the debut release, we are definitely keeping Plastic Love on our radar.
J: Thanks Devin! This was a pleasure.
B: Thank you!