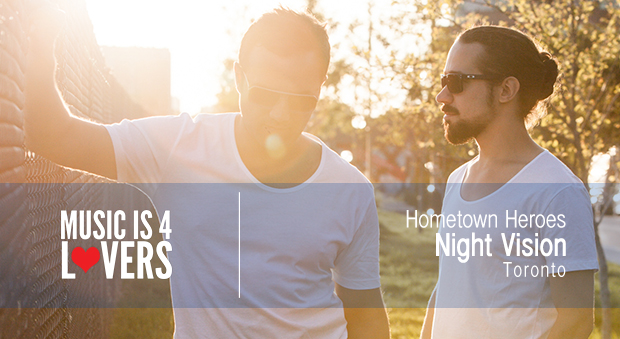 TJ & Pavel formed Night Vision in 2012 as an extension of their successful Canadian party brand. Based out of Toronto, the duo continues to wield their craft in ways that has landed them on the massive line-ups of the BPM Festival in Playa Del Carmen and the inaugural SXMusic Festival on the Caribbean island of  St. Martin.

Back in the CA, Night Vision are regulars behind the decks at famed nightclubs such as Coda and Parlour; and have warmed up the dance floor for a roster of high profile artists: Seth Troxler, Fritz Kalkbrenner, Dixon, Âme, Thugfucker, Job Jobse, Mano Le Tough, Blond:ish, Dj Tennis, & Art Department.

The two’s melodic style places them in a prime condition to get any crowd feeling the flow before the main act takes the stage–the perfect opener. With TJ & Pavel’s musical prowess and connection within the industry there is no doubt Night Vision will soon be a hot commodity on a international scale in the near future.

In the meantime, enjoy this week’s Hometown Heroes episode–the first on our HH roster out of the robust city of Toronto.

Thanks for taking the time to chat with us.

How did you guys each get into DJing and house music?
We were both DJ’ing in local Toronto clubs for a few years before meeting each other.  We used to play regularly at a venue in Toronto called Parlour. We would DJ on Saturday nights there and after a few months of some memorable parties there, we realized we needed to start a project together.  And so, Night Vision was born.

What’s the state of the dance music culture in Toronto? How the local scene inspire your music?
Toronto’s music culture is definitely thriving.  We’ve been spoiled with the huge amount of underground artists rolling through the city, proper festivals (Electric Island) and some of the best venues in Canada.  The quality of local talent here in Toronto is also pretty inspiring to us and we’re really happy to be a part of this scene.

Do you hold any residencies?
We currently do not.  Each of us had our own regular nights before we came tougher. But now we try to keep it fresh by playing at various venues. We want that experience to be special every time for both us and the people attending the event.  That said, we do play regularly at Coda and Parlour in Toronto which also happen to be our two favourite venues here.

Where do you see the dance music industry heading?
There are so many artists experimenting with different sounds, trying to branch out and push the sonic boundaries of music today.  It’s a really interesting and exciting time because we’re being exposed to so many different visions of defined genres.

TJ: I’ve been really getting back into the progressive sound as of late.  I’ve always loved what Hernan Cattaneo and Digweed (and their labels) having been doing for the progressive scene.  Lately it’s been slowed down, moody progressive and that’s something that’s currently on my radar for sure.

Pavel: I’ve always steered towards cultural, percussive influences and I’ve seen more and more of that come into play across all genres of dance music. It’s like a mini tribal resurgence fused into the deep, techno styles that have been dominating the landscape. When artists like Culoe de Song and Black Coffee are headlining DC10 you know something really cool is happening in house music.

What do you think is the most taxing aspect of being DJ/producer today?
For us it’s making time outside of our full time jobs to have a decent go at producing/DJ’ing.  Outside of regular hours almost all of our efforts are put towards music. And we try to sleep somewhere in the middle.  That part doesn’t always work out.

What’s on the horizon for you 2016?
We’ve been in the studio the last few months working on some new Night Vision material that will be released in 2016.  We also have a few festival gigs coming up at both BPM and SXMusic Festival in St. Martin where we’ll be playing alongside a host of incredible international DJ’s.

Pavel: It would probably be Burning Man. One of the best gathering of humans on earth.

TJ: Somewhere in the jungle.. no phones or cameras allowed.. a two day event.. and absolutely no evidence that a party ever occured.. and only the people that were there at that moment will ever know it happened..   costumes mandatory.

What’s one track in your crate that gets the party poppin’ every time?

Tell us about your mix…
We shaped the mix into a deep and progressive style. Something emotional and driving for the daily keyboard marathon. It’s not a ‘work-out tape’ and definitely not a ‘happy holidays Mom’ mix either… somewhere in the middle.