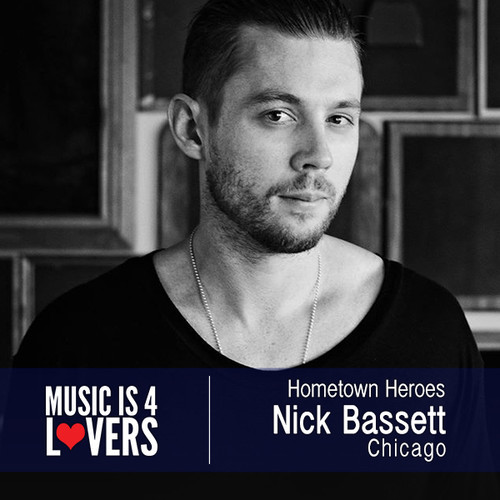 Nick Bassett is a resident of Chicago and has been making a name for himself in the city since 2007. He’s recently released on the infamous Visionquest label and has paired up making music with Lee Curtiss for his debut release. As a SpyBar resident, one of the premier clubs in the country for underground house music, Nick is constantly supporting some of the best talent in the world. This guy is one of the top up and coming DJs in the country and we got a moment to catch up with him to find out more from this rising artist.

Where are you from originally? How did you get into DJing and producing house music?

I am from Urbana, IL, a college town 2 hours south of Chicago where the University of Illinois is located. My father is a researcher/professor so I spent a lot of time as a kid traveling around west Africa and Europe with my family and then always back to Illinois. I was always a fan of electronic music, but it was when I moved to Chicago that I really discovered and fell in love with good house and techno and started DJing. Making music was the next step which I am still just beginning to explore.

Describe the scene in Chicago.

The scene in Chicago is very tight. everyone knows each other and all the heads see each other at every party etc. Also you dont have a lot of new people coming and going, everyone around has been around for a while and takes their music very seriously.

How does the weather in Chicago affect the parties?

RAVERS WILL RAVE haha, hot or cold the party kids will be out, however Summer roof top parties always have a special place in my heart.

Tell us how you came to be a resident at Spybar.

I moved to Chicago in 2007 and shortly after that started hanging out there a lot on Fridays, it was and is my favorite club. I got to know the Spybar family and they were very welcoming and supportive and have become some of my best friends. Dino has always been my biggest supporter and I am very lucky.  He was one of the first people to book me to play and gave me an amazing chance to play a sold out club with just Maya Jane Coles which went really well.

What was your experience like with the Riverwest Festival this past 4th of July weekend?

Amazing and exhausting! I was lucky enough to play official after parties Friday/Saturday and the festival on sunday so was a full on weekend. To be honest Wavefront/Riverwest have been some of the most fun times for me in Chicago.  All your friends from around the world take over Chicago for the weekend and there is never a shortage of amazing music and people in the city.

How did you link up with Visionquest?

When Lee Curtiss moved to Chicago a few years ago we started hanging out a lot and he  has become one of my closest friends. Everything I learned about making music was from him. I met the rest of the boys through him and they put my first track out “dancing girls” that Lee and I made in our studio.

Who is YOUR Hometown Hero?

One of my favorite local DJ’s is Mantas Steles. He has a great taste in music and is always doing his best to support local Chicago DJs. Also obviously Dino Gardiakos, the Chicago scene would not be what it is without him.

Half Acre’s – Daisy cutter. It is an amazing locally brewed American Pale Ale