Hometown Heroes: My Boy Elroy from Chicago (Mix and Interview) 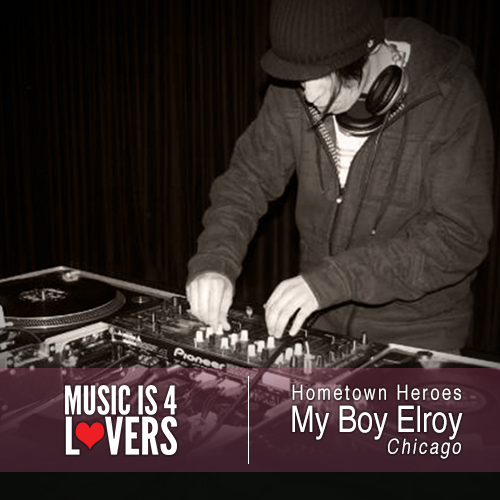 For this edition of Hometown Heroes, we caught up with Chicago-based DJ/producer and musician David Arredondo, better know as My Boy Elroy, whose been making waves around the house music mecca. David’s diverse catalog of performances and productions have landed him gigs at European jazz festivals alongside Stevie Wonder and in Chicago clubs on stage with top tier DJs such as Duke Dumont and MK. We’re happy to welcome My Boy Elroy to the Hometown Heroes roster with this smooth mix and interview below.

– Tell us a little bit about how you got into music, and who some of your earliest influences were.

My mom and dad both played instruments so they were always playing and putting on music. I’ve always had a lot of rhythm because of that exposure to music from my family. We grew up on a lot of stuff like the Beatles, Fleetwood Mac, Jimi Hendrix, and my personal favorite Michael Jackson. He is probably the reason that I am so expressive. He was the one who gave me a lot of inspiration to not really care what other people thought about me. He just made me happy and want to dance and sing a lot. He really kick started my musical drive.

– What are your Top 3 Michael Jackson songs?

In The Closet, Leave Me Alone, and She Drives Me Wild.

– What were your first experiences with electronic music?

When I was 16 I went to my first big rave in San Diego at the Sports Arena where Donald Glaude and Paul Oakenfold were headlining… this was two years after I started DJing in 1998. That was when I knew this was where I belonged and I immediately started saving up for my first set of Technics. Best purchase of my life!

–  It seems like you’ve managed to attain a pretty diverse musical output through DJing and performance… could you tell us about some of the best times you’ve had performing? And maybe the moment you realized this was what you wanted to do with your life?

There are so many wonderful moments and I am grateful for each of them. Opening for Massive Attack at the Riviera in Chicago was a major honor. I played a downtempo set of instrumental hip hop and drum & bass, then finished with a 15 minute beat box using a vocal processor for 2500 people. I have never been so nervous! We [Liquid Soul] opened for B.B. King at the House of Blues in Chicago where I got to speak with the man himself about his times playing with Eric Clapton and how he inspired my family.  A year later we opened up for Stevie Wonder in Kitzbuhel, Austria for a jazz festival in front of 6,000 fans. His band played an entire hour after they were scheduled to play and I was speechless the entire time!

–  Living in Chicago must be a pretty inspirational place to live for music, who are some of your local favorites?

When I first moved to Chicago I spent all my money going out  to see what this amazing city was all about first hand; this is when I came across some of Chicago’s finest local talents, such as Mark Grant, Justin Long, Jeff Bloom, Andrew Emil, Uncle Milty, Lady D, Colette, DJ Heather, Michael Serafini, Iz and Diz, Ben Stroh (Striz), Duke Shin, and many more! Nothing beats Chicago when it comes to house music. That’s why I haven’t left.

–  What sort of projects/events do you have coming up that you’re excited about?

Festival Season is just around the corner! I’m very excited to be headlining Summer Camp for the fifth year with my band Digital Tape Machine on May 23rd; I was also recently added to play North Coast Festival here in Chicago for the second year in a row; and as we are thawed out after the worst winter in over 100 years, there are enough boat parties, rooftop BBQs, after-parties, and music festivals to look forward to. I’m especially looking forward to all the amazing people that will be there for all the same reasons! Increasing the family is what it’s all about! Big love and thanks for having me on!