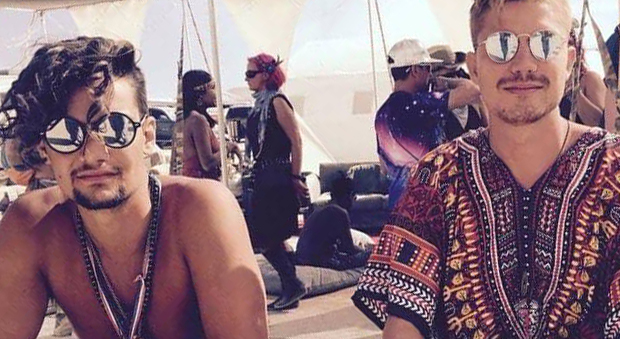 Julian Connor and Mykola Smith are a New York City based DJ duo. They hold a sound resume of appearances, having played alongside the likes of DJ Three, Atish, Thugfucker, Behrouz, SAAND, Goldcap, and Maxi Storrs. They are also the resident DJs of vyvn, an NYC based Burning Man camp.

Mykola- My first foray into electronic music was drum n’ bass. Coming from LA, I grew up listening to hip hop on Power 106. Dnb was a natural progression from that and then from there I worked my way down in tempo from trance, to electro and finally techno and house.

Julian- In my teens, I listened to a lot of techno and happy hardcore. My tastes slowly transitioned to liquid dnb and dubstep. In 2010 I spent five months in Barcelona and would frequent Macarena Club. Their musical curation and a chance encounter with Gui Boratto indefinitely altered my aural trajectory.

How did you two link up?

Mykola- We met after I started asking around where all the electronic music DJs on our college campus were. I think Julian was the only actually spinning house at Rensselaer Polytechnic Institute (RPI). So we linked up based on that interest and we started playing parties around campus. I bought a pretty decent sound system– at a time where most people were blaring top 40s on shitty RadioShack speakers. This was before house really went mainstream so it was a bit of an uphill battle, but eventually we were playing everywhere on campus. Then Julian moved to NYC after graduating and began hosting and DJing small club nights in Manhattan. By the time I graduated, he had gathered some momentum and was getting booked at small / medium sized events.

You just got back from Burning Man, can you tell us a little about your experience?

Julian- This was my fourth burn and it required the most sweat. Vyvn, the Burning Man camp and NYC+SF-based community we’re a part of, accomplished a lot this year. Most notably we: shipped our sound system from Brooklyn to Burning Man and back, tripled down on infrastructure + shade, and hosted two 9 hour parties. All in all, it was most fun colliding with friends new and old, and building with the crew. Be a ladder, not a chute.

Mykola- My experience this year was mainly focused around helping to scale our camp. We’ve been extremely blessed to have some great mentors on the playa, so learning from them and soaking up their wisdom has been an excellent opportunity to learn from the best.

Can you tell us a little bit more about Vyvn?

Julian- Vyvn started out as a group of house and techno loving club kids. We began producing our own events when NYC’s nightlife scene left us desiring something more intimate and unique. The vyvn vision is inspired by our nightlife experiences around the globe. Our goal is to design the ideal party for ourselves which will hopefully translate well for others. Burning Man seemed like the ideal umbrella for such ambitions.

Julian- When less energetic or working, I listen to a lot of: Tom Ellis, Lake People, Thermalbear, Ólafur Arnalds & Nils Frahm, Tim Hecker, Life on Planets, Leon Vynehall, and Floating Points. After a cup of coffee: Audiojack, Loco Dice, Paranoid London, Shaded, and German Brigante. I almost exclusively listen to Guy J while traveling. (lol) Label-wise, Keinemusik immediately comes to mind. They’ve branded a unique sound, have an extremely talented roster, and have maintained a consistent aesthetic. Other nominations, among many, include: Gruuv, 8Bit, and 20/20 Vision.

Top 5 tracks at the moment?

This is what I bumping today:

Mykola- Pretty much all music these days is produced electronically so it’s kind of tough to answer that. I guess ambient? I also have a soft spot for ignorant, ratchet AF southern trap, it’s goofy and fun to listen to when you’re in the right mood.

Julian- We hope to re-inject house-party vibes and spontaneity into NYC’s nightlife scene. Isn’t it most fun when you don’t know what you’re getting into?

Julian- Our focus was to have fun with this mix. You’ll be hearing melange of tracks we play out, tracks we love but haven’t yet been apposite, and switch-ups.