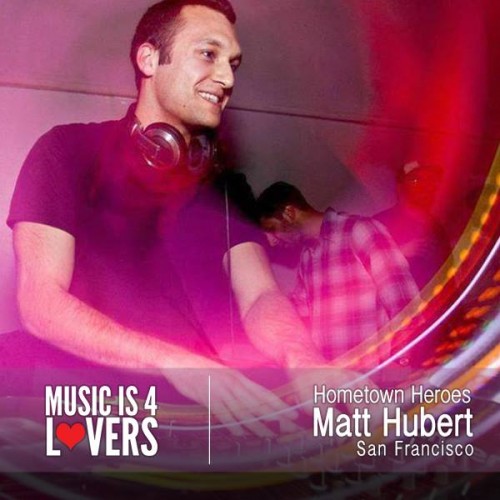 Matt Hubert is a San Francisco based DJ whose love for music shows no bounds.  Drawn to everything dark and deep, Matt has developed his sound in a way which has made him highly in demand. He has warmed the decks for John Digweed, Avatism, Guy J, Max Cooper, and  many more. In addition to DJing, Matt also produces events with rollingTUFF.  Passionate about driven, Matt Hubert is a quintessential member of our community.

I am originally from Orange County but have been living in SF since 2010. I remember always going through my parents’ record collection back as a kid (mostly classic rock, jazz, and blues) and being completely blown away by the new sounds I was hearing. From there, my interest in music grew and when I got a bit older I discovered The Prodigy, Chemical Brothers, Moby, and other artists. Once I saw my first live Chemical Brothers concert in high school, I realized that live electronic music was something I had to immerse myself in for good.

Once I went to my first rave at the end of high school, I was completely hooked and was raving every weekend from that point on. At this point, I decided it would also be fun to start mixing music purely as a hobby. Eventually I started to play out and couldn’t get enough of it. I then moved to SF for college, and became inspired to do my own parties, which led to me where I am now.

San Francisco is one of the leading cities in dance music right now. What is it about this city and the quality of music that comes here on a constant basis?

SF is filled with so many amazing promoters that bring out top-notch talent every weekend, and without them we wouldn’t have such a quality scene. The big two that comes to mind are Sunset Sound and  As You Like It, who has been helping put SF on the map with their bookings and have inspired newer promoters such as myself! We also have some incredible venues such as Public Works and Monarch that bring out the best ‘underground’ talent. The afterhours scene here is strong too, and from Friday to Sunday you can keep partying nonstop. Let’s also not forgot the crazy block parties, park/lake parties, and boat parties we have almost every weekend. We are quite spoiled!

You have been playing some pretty awesome line ups as of late. Can you tell us about your favorite gig?

Playing two sets at Last Resort earlier this year in Miami was pretty crazy, and it was an honor to be on a lineup with so many artists I admire and look up to. However, my favorite gig this year has to be opening for John Digweed (my favorite DJ) in March alongside Atish. Digweed was one of the first Dj’s I saw live, so it was like going full circle. I played again with him more recently, but that first time was still the most special to me.

Who are some of your favorite producers/labels right now?

Go out there and network as much as possible. It’s all about fostering relationships within the community and getting involved in any way you can.

Can you tell us little about this mix?

This mix is a departure from my usual sound, but it represents where my tastes are at the moment. I tried to keep it melodic the whole way through while drifting in and out of an eclectic range of styles.