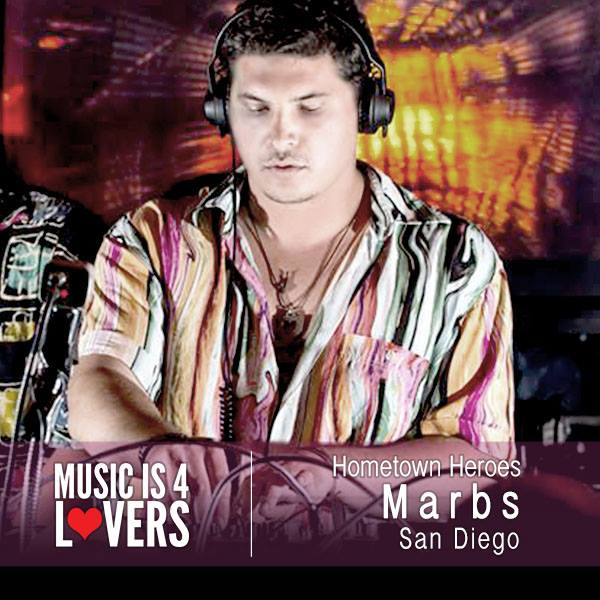 Matt Marabella aka Marbs is a favorite of ours from our hometown of San Diego. We’ve watched him bloom and blossom over the years into one of the most respected rising talents San Diego has to offer. His sound is unique and he never fails to take you on a special journey he’s carefully plotted every time he graces the decks. He also happens to be one of the most genuine and kind people you will meet in this music scene. His desire to bring music lovers together is surpassed by none. His attention to detail is more than obvious when you watch how meticulously he blends his selections and it’s rare that you will find anyone playing the same music as he. It’s a rarity these days to be an up-and-comer and already have a defined sound, but he’s nailed it. Marbs’ sound can be characterized as melange of dark and whimsical tracks complemented by heavy basslines, but don’t take our word for it. Give this latest edition to our Hometown Heroes mix a listen and see for yourself.

Hey Matt, thanks for taking the time to answer these questions. I know you are getting ready for Burning Man right now and it’s a super hectic week. Can you tell us about Burning Man? How has this festival influenced you as a DJ?

Burning man is the most exciting, emotional, and busiest time of  year for us. Its like if you were a kid and all the holidays and amusement parks landed on one week, it’s like you’re going to pop. In a very good way

This will be my 4th year. I’ve gone to the Playa every year with my desert hearts family and we went from a small (pretty much nothing) camp to now a 70+ member theme camp named Pile Palace. Growing with our burning man family over these last 4 years has been nothing short of magical.

Something people may not know about my Burning Man experience is that 2 months before my first year my Grandfather died. He was a huge influence not only in life, but artistically. He helped me learn to draw and he encouraged me to live life to the fullest. They have a temple that burns on the last day and thousands of participants go there with memoirs and memories to contribute to the structure. They burn it to help those who have lost someone or something. It’s to help them let go and to be accepting of what has happened. This has been a huge part of my burning man experience each year and has become very important to me.

As for the influence, I think anyone who has been to our Desert Hearts festival or any event  can see that the Burning Man vibe has a heavy presence. Whether it be the music that we play or the people who enjoy it, Burning Man has influenced every part of our lives. It was life changing and I’m very grateful for that.

You grew up in San Diego right? Tell us about the musical climate where you live? Is there a good music scene there? What makes San Diego different than other cities?

Ya I’ve lived in San Diego my whole life and music was a huge part of it. Music was all over the place for me. I loved everything from underground hip hop, to classic rock, and pretty much everything in between. After college when I returned to San Diego I really wanted there to be more of the electronic music that I had been listening to. My best friend Ryan Orey (aka Deep Jesus) and I had teamed up with Mikey Leon (Mikey Lion) and decided to start throwing music and art parties at local bars in our home town in order to start having more of the music we loved at home. I feel like the last 4-5 years have been huge for the music in San Diego. The area needed something new and something fresh. Between a handful of crews such as us, Lovelife, Moonshake, and many more, I think the music has really blossomed here. It’s exciting and I’m always looking forward to the future.

We’ve seen you DJ many times now, and I think we all agree that you’re one of our favorites. Who are some of your favorites? Some of your Heroes, if you will.

For DJ’s it would have to be Tale of Us, Richie Hawtin, and Lee Burridge. Lee was actually the first person that fully got me into good electronic music. It was after seeing him at the Civic Center in San Francisco for Love Fest with all the Burner Buses that I knew this music had to be a huge part of my life. On the production side I would have to say Mind Against and Dance Spirit have really grabbed me and I’m always really excited about the sound they’ve been creating.

Is music production on the horizon for you?

Actually yes, with the launch of our Desert Hearts Record Label it’s really put a fire under my ass to make some music. I’m currently working on my first track and loving it. It’s deep, dreamy, and trippy … just the way I like it.

Where do you see yourself as a DJ in the coming years?

I want to branch out into new territory. I love San Diego, but I’m ready for new places. After our first Desert Hearts LA and SF Takeovers these last couple months, its been an incredible sign that we’re ready to spread the love outside of Southern California. I’ve had a lot of amazing experiences in Mexico as well, so venturing abroad has been on my mind a lot lately too.

Tell us about your roll in the Desert Hearts events. You’ve got your anniversary party coming up in a few months. Can you tell us about that?

My role with the Desert Hearts festival has been heavily focused on art and installations. I work a lot with my business partner Kristoff in organizing all the artists and visual installations for the events. I grew up doing art every day and I do all the album artwork for our Record Label, so being involved in the art at the festival was always important to me. My main job though, is handling the Finances and working with the rest of the crew building our vision and goals.

The 2 year anniversary is shaping up to be our best one yet. We say this every time, but it just gets better and better. Our early bird tickets sold out in one day and we’re planning on having more talent and artists than ever before. We’re also looking at a brand new untouched outdoor venue that can hold more people and is one of the most beautiful locations we’ve seen in the San Diego area. Lot’s of exciting surprises and news will be released over the next few months

Bloody Mary during the day – Duh … and anything with Whiskey at night.

If you could be any animal, what would it be and why?

This is hard, but probably a dolphin. I’ve always loved the ocean and grew up surfing every day. Dolphins always looked like they were having a blast out there. Plus they’re one of the smartest animals, with the longest memory, and they can take down sharks.

Who is your hometown hero?

Lee Reynolds. Ever since I met him he’s been a role model to me. Family man, humble, artistic, a strait gangster behind the decks, business owner, pro BMX’er … and he parties literally harder than all of us combined. There’s nothing he can’t do.