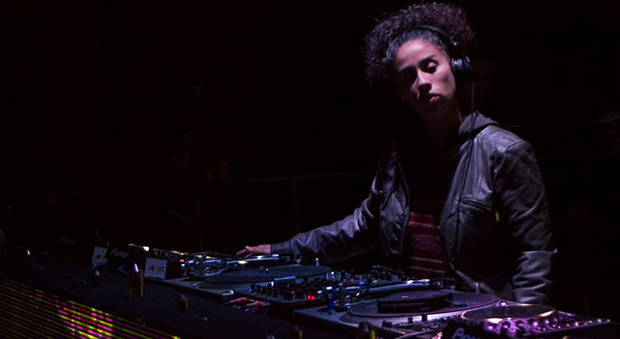 We met Luiza while partying in Mexicali a few years back. Her demeanor was humble and pleasant; you would never know she’s a bad ass techno DJ! We were astounded the first time we heard her behind the decks!

Despite her unpretentious personality, Luiza is a prolific character in the flourishing scene in the México border town. As resident DJ for Baja promotion crews Midnight Music and krzfckrs, Luiza’s style spans through an array of 4/4 genres, but always seamless and suitable for her set time–the mark of a great music selector.

Living in San Diego we’re fascinated by our Mexican neighbors, so having the opportunity to feature any of the Heroic figures doing cool things across the border is an honor to say the least.

Read more about Luiza’s story in the interview below and enjoy this week’s Hometown Heroes episode.

How did you get into djing?
It all started approximately 8 years ago when I learned to mix music with three of my friends. One of them bought equipment to mix music and invited me to learn how it worked. I thought it was very interesting and entertaining–that’s where the story starts. When I started mixing music in my city, Mexicali, I started to receive good feedback from the people that went to parties: promoters, djs, etc. At first, I started searching for music that I liked without knowing much about genres. I leaned more towards electro, house, progressive and tech house. After that I discovered techno and that’s what really caught my attention, especially the variety of bass lines I was discovering. Once I had dominated that genre I was open to experimenting with other genres like deep house and disco. Currently I mix a little bit of everything in my sets but I describe my sound as techno with a progressive line and atmospheres with space sounds. I like that there is always a transition in songs that I use that tell a story from beginning to end and maintain a good groove for peak points at a party.

What’s the scene like in Mexicali? How could it be better?
I’ve been in the music scene for around 12 years now as a spectator and 8 years as a dj and the truth is that the scene is very energetic and open to new things, as long as they are done well. We have solid promotors who keep making events and bringing quality djs and producers to the city. There are a lot of people working hard to keep the scene alive. I think that the scene could improve with some investments in venues for events.

What has been a memorable moment for you while djing?
I have many memorable moments, but there are two that are still very present. One was in Mexicali about 6 years ago, I had the opportunity of playing a party produced by Sunsound, a local promotor, where the invited guest was Deadmau5. There were about 7,000 people! I’ve never played for so many people before, watching and feeling so much energy from the crowd was an experience that I still remember! The other moment was when I played at Liuqid Summer 2013 in Rosarito, Baja California. I got to open for my favorite dj Lee Burridge. It was a very nice experience.

Tell us about Midnight Music…
Midnight Music is a promotor who throws events in Mexicali. The owner, Armando Padilla, is a very good friend of mine and sometimes mixing partner. The concept is to make quality underground parties in every aspect and try to find good spots for the event; providing good music with djs/producers. The idea is that the people have a good experience and improving every detail.

Where do you find inspiration?
I find my inspiration from many things and places. For example, music from past decades; instrumental sounds from other regions; the feedback I get from people enjoying the party; and from djs I listen to that come and show me their perception of music, which is unique because they are from different parts of the world.

Dream gig…
I would like to have the chance to play at some of the best clubs in Europe. Also playing in Germany is something that catches my attention.

One track that gets the party poppin’…
Talaboman – Sideral (BCN Version)

Tell us about your mix…
This mix was recorded live at a Midnight Music showcase in Tijuana at WhereHouse. It was from 2:30 to 4:00am so it was officially after-hours. Basically the music I selected was to bring the party up. All the tracks are from very good producers with different styles. The place kept filling up while I played, it was a really good night for me. I hope you enjoy!