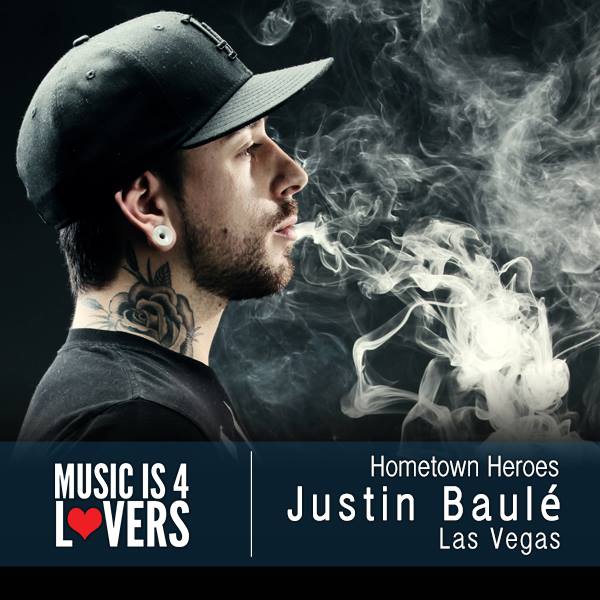 I’ve known Justin Baulé for many years now and if there’s one thing I can say about the guy, it’s that he knows good music. He introduced me to a lot of the sounds that have influenced my DJ trajectory and ultimately, he is one of the most influential DJs in my career so far. I became friends with him at a really impressionable point in my career and man was I impressed. I’ve learned a lot from some of the best DJs in the world, but when I was just a few years into the game, Justin is the one who taught me how to get deep. He’s one of those DJs that when you see play, you realize he’s truly doing it his way and has got a style unique unto himself. If you haven’t heard of Justin, make sure to look him up next time you are in Vegas. You can usually find him playing somewhere super late night, after the mainstream clubs have cut you off at the bar.

Tell me about Las Vegas. How did you end up in the desert?

In ‘02, I moved out west from Minnesota to snowboard. Spending my winters in different mountain towns like Big Bear, Mammoth, Tahoe and Breckinridge. After each season I would head to Vegas, crash in my Moms guest-house for a couple months, deliver pizza’s to make some loot and then move back to another mountain. I miss those days; life was simple. ’07 I blew my ACL, had surgery and eventually my sponsorship money dried up, so I ended up here fulltime. When I moved back, I hadn’t played records in like 6 years and had a job at a local after-hours taking photos. One evening a dj was fired, I was asked to fill in and it turned into a 5 year residency.

How did you get involved with DJing in general? Why house music?

When I was 14 I begged my mom to buy turntables while we were in Guitar Center. I didn’t know how to use them, but I was determined to figure it out. Few months later one of the 12th graders from the local high-school caught wind that I was learning to dj and invited me out to a party. So we arrive in downtown St Paul, at what looks to be an abandon warehouse minus the leaking bass. Walked up 8 flights of stairs and my life changed forever. The fog was so thick you couldn’t see more then a foot in front of you, windows were all blacked out, neon kids lined the hallways and the only light was on the dj’s setup. I walked up to the booth and couldn’t comprehend how that much sound was coming from the record. That night sparked my interest in electronic music.

As the next two years I spent a lot of time in this records store “Let It Be Records” (RIP) in downtown Minneapolis and learning how to dj. I was a young kid and the employees/djs took me under their wing and guided my taste. By 17, I played my first rave and eventually was brought on to be apart of this local deep house collective. ECDC!

Tell me about the current underground scene in Vegas. It is definitely not the first place people think of when looking for underground house and techno, but we’ve heard things are changing. Where do you fit into this effort?

If I can say anything about the current scene here is there is so much heart from our local underground djs and supporters. They seriously get dropped on their asses from countless venues that only give a shit about making money off your party… But they always get back up, dust their selves off and try again. It’s a brutal process and unique to this town. All it takes is one bad night and you’re out the door. No one ever gets an opportunity to build a party out here. It’s sad. Quarterly reports stifle creativity. Hopefully with After, we will break away from the current process.

Tell me more about After. Who is involved and how did it all get started?

Thom Svast is the man behind After. He is so dedicated to this brand and I feel really special to be apart of it. It’s refreshing to play a set out here where you manager understands what you’re doing, your dance floor understand what you’re doing and I don’t have to bend by playing some shitty, watered down, tech-house bootleg to get an uneducated dance floor more involved.

Our other residents are Spacebyrdz, Brett Rubin and our amazing lighting man, Kc-Ray.

What record labels are you affiliated with? How do you think being a music producer in addition to being a DJ changes your perspective on music?

When you make music by yourself, no ghost producers, it takes you on a journey. Hands down the most challenging thing I’ve ever done artistically. Just when you think you’re over a hill, there is another even larger peak to climb. It is a very special process and completely changes the way you look at tracks, your sets, everything. It has made me more secure in my craft, while making me more insecure at the same time.

What is your favorite thing about being a DJ and what is your least favorite?

Every once in awhile there is a party that has a special moment where everyone is just “being”. We become this unit; this community, where all our personal insecurities vanish and we feel our true human state… connected. It’s a drug. I’ve been chasing that hit since this warehouse party I played at 19, I will always be a slave to that night.

The worst thing about djing these days is other dj’s etiquette. Some of these kids are fucking pieces of shit. Sorry to say. Undercutting your gigs, trying to promote themselves by any means necessary, pushing all this social media hype that isn’t even real, banging out the opening set, rushing off the dj that is before you and the topper is all these djs paying other people to write music for them. Eventually you won’t be able to fake it till you make it. The dance music community is becoming educated.

Who are some of your biggest heroes in dance music? Who has really influenced you in the past and who inspires you now?

From my past it would be a lot of Midwestern guys, Derrick Carter, Juan Atkins, Derrick May, Kevin Saunderson, DJ Funk, Paul Johnson all would make it to Minneapolis each year.

If you could perform anywhere in the world, where would it be?

Maybe like Fabric, Watergate, Berghain? I don’t know. Honestly, wherever there is a dance floor that has patience, I’m down.