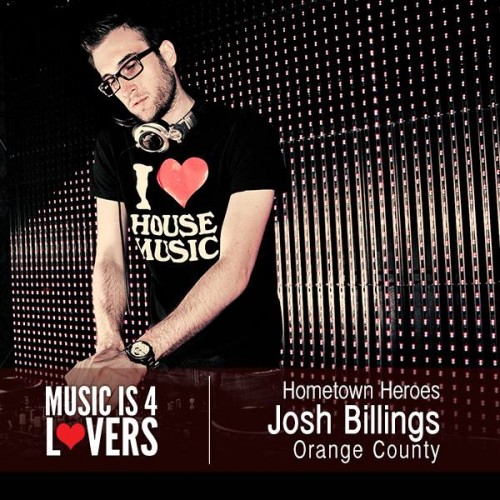 Josh Billings is important to house music on so many different levels. Since 2000 he has been actively involved in the West Coast House Music scene. He is the creator & founder of the long running weekly, Focus (2003) in Newport Beach California. His skills are highly respected by his peers and his growing fan base continues to show how this dj / producer / promoter’s star continues to be on the rise.

Whether it’s drawing from his deep house roots or picking things up with a little more funk his sets are always unique and never planned. He’s shared the decks with a “who’s who” amongst house music aficionados. From Kaskade, Fedde Le Grand, Mark Farina, James Zabiela, Nic Fanciulli, Miguel Migs, and the list goes on. More recently Josh has been focusing on his productions and remixes and there are plenty of releases in the pipeline to look forward to.

Josh Billings’ name is synonymous with quality house music. Promoter, DJ, and producer- he is a man of many hats and continues to solidify himself as a name to keep an eye on. Being drug and alcohol free for his entire life, Josh is a rare breed. When he says “It’s all about the music” it really is.

How and when did you get your start into house music and DJing?

Well I started Focus and ended up buying all this high end DJ gear and just kind of learned in my spare time. Then after about a year or so started doing the opening hour or so of the club when nobody wanted to play and from then it just grew into what I’m doing now.

What do you find is the biggest challenge playing music for people?

Hmmm, I guess the most challenging, yet fulfilling part, is reading the crowd. If you’re able to vibe with them and get on the same level and take a journey together it’s one of the best feelings ever. However if you’re feeling sick or just had a fight with your girlfriend or something sometimes it can be quite a challenge.

You are the creator of Focus OC, what drove you create this event and run in weekly for the past 11 years?

I just really dig house music. Ever since the original Lazy Dog CDs I’ve been hooked. There were a lot of cool spots in LA that were doing things that I was into, but spots in Orange County were few and far between. It was basically just me booking the kind of music I really wanted to see on a dope sound system (another rarity in Orange County). Luckily a lot of other people dig the same stuff I do.

Do you find it difficult to run a weekly event and to continue to keep it fresh week in and week out?

Sometimes, but honestly between Wobs, Nonfiction & Myself we come up with all kinds of good ideas to keep things fun…like this Pizza Party next week…c’mon…that’s an amazing idea.

Who are some of your favorite local DJs?

If you gave one piece of advice to an aspiring DJ what would it be?

Don’t try and mimic anybody else. They are already way better at being them than you ever will be. Develop your own style and people will embrace it.

What’s on the horizon for you?

More weekend events at really cool spots. Just came back from a couple meetings today and more emerging artists at Focus that we really dig. If we book some artists you’ve never heard of, do a little homework and check them out. There’s usually a reason we’re sticking our neck out to bring in cool new talent.

When other music do you listen to besides house music?

A lot of old school funk, hip hop and R&B.

No real rhyme or reason to it, just hit record and started playing and this is what came out. On the slower side of the deep house spectrum (120 ish bpm).