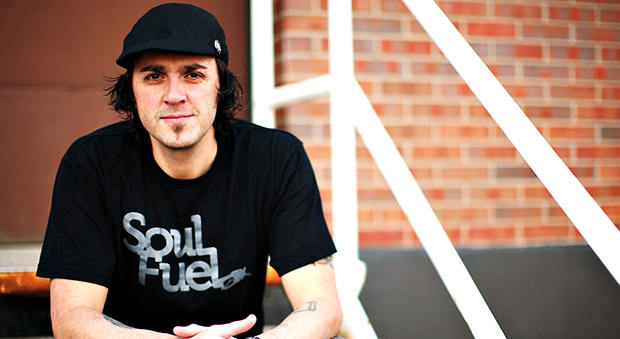 Since his first DJ Debut in 1991, Jonn Hawley has been a pillar of house music in his Milwaukee, Wisconsin community. With a passion so fierce, Jonn has been able to spread that vibe all around the globe. Not only a great DJ, he’s been running the widely known record label Soul Fuel Recordings since 2003. Within his label and own production he truly spreads an inspiring message of unity and joy in the world of house music.

Jonn Hawley’s determination, adored talents, and love for House Music is shown in every project he touches. He is not only respected and recognized on an International level but he always brings the love back into his hometown. Get lost in his mix, as he is this weeks Hometown Hero!

* CLICK HERE if you do not see the SoundCloud Player.

How did you get into electronic music and DJing? Is there a specific moment of inspiration that you can remember?
My older brother was a DJ in the 80s/90s so I would regularly go to the places he worked to dance and mess with the gear. When I turned 15, he bought me a mixer and handed me his old technics 1200 along with a technics 1800. I was hooked.

Tell us about the music scene in Milwaukee. What sets it apart and makes it special?
Milwaukee. We have been in a relationship for my entire career so there is definitely too many things to mention. However, when the Milwaukee crew shows up for the party, its like no other place on the planet!

Tell us about your Record Label, Soul Fuel. What are your inspirations behind it?
I always say that during a set, I want to touch that vulnerable spot in the middle of your chest, where your soul hides behind the walls that were created from the stress and nonsense of day to day life. The fuel part stems from the fact that my father was a master mechanic, and owned his own gas station for 50+ years.

Any special projects in your horizon that we should know about?
Currently finishing up my record for King Street Sounds. I teamed up with some of my favorite vocalists to create a 3 track composition. Much like my first EP on Large Music “Soul Dweller” from 2010. This one features vocal veterans FOURFEET, MIKEY V, and the brand new talent of CASEY RICE. The release is slated for early 2017!

Top 5 tracks in your playlist…
I have always found it difficult to narrow tracks down to a top 5, 10, 100… The reason for that is a party is a living animal. Where some tracks will work, some will not. My top five is what the moment at hand is calling for!

Most memorable gig ?
Most memorable gig hands down would be Summerfest in Milwaukee with Derrick Carter and local hero D-On. My parents were front and center with 5000 people behind them. Kevin Sinclair joined me on stage with some live saxophone. That place was jumpin!

Tell us about your mix…
I pressed record, then I pressed play on my turntable with no auto sync. Proceeded to blackout and a little more than an hour later the mix was done.

Drink of choice..
Mountain Dew. Red Bull if ya nasty.