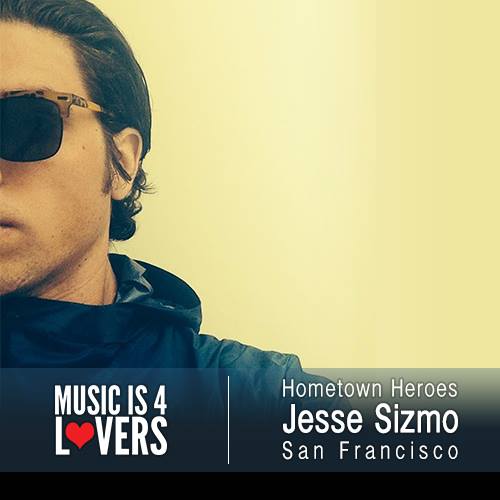 This edition of Hometown Heroes comes hot out of San Francisco from Lips & Rhythm founder Jesse Sizmo, an east coast import and gypsy soul with a wide range of musical influences who found his home in a city of artists. Deeply influenced by the beauty of San Francisco and on the brink of a label launch with Lips & Rhythm, we sat down with Jesse to learn a little bit more. Press play and chill out with this seriously good vibing, smile inducing, groovy, funky, soulful eclectic house mix while you delve into mind and mystery of Jesse Sizmo and all that is and to be of Lips & Rhythm …

So Jesse, for a little background, How long have you lived in SF?

What does music in SF mean to you?  How do you see the culture? What is your relationship with it?  How has it changed  over the time you’ve been there?

The first party I went to here was the Sunset Opener at Stafford Lake. To see a whole community of people dancing and everyone chilling and generally being cool with each other shocked me coming from partying in New York. The supportive, creative and DIY vibe of the dance community is definitely what drew me out here.

As a writer and a lover of the Beat poets I always wanted to be out here exploring the new American frontier. The city is mythological and unique, with an energy that has given rise to a lot of amazing leaps in modern or now post-modern society. People of all types of crazy seem to arrive here seeking exploration, whatever their job or passion may be. Yes a lot of new money has come into the city and yes things are changing, but that is the nature of time. The music scene is stronger than ever it seems.

This town has become a 24/7 music festival. You can go out every week to a unique party and see someone dope slamming it on the turntables. There are also a bunch of new clubs with some great sound systems that didn’t exist five years ago.

To start, tell us about Lips & Rhythm …

Lips & Rhythm is a weekly dance music radio show that I host in San Francisco at a rad pirate radio station called Radio Valencia. It is also a limited release vinyl label I’m launching, featuring my creative friends and cohorts.

The idea to do Lips & Rhythm came out of my interest in combining my love for journalism and music. I’ve been a freelance journalist for eight years and had a stint with college radio years ago. I was bored with just writing all the time, decided to apply for an open slot at Radio Valencia and sent them a mix. The name however…ha. It came from a long conversation about tropical heat, the equator, drums and beautiful women that I had one night with my friend DMAX when I was living in London a few summers ago.

This kind of music on the radio certainly doesn’t happen around San Diego, Are radio shows a common thing in SF? what makes Lips & Rhythm its own special thing?

It’s two hours of dance music and rare grooves broadcasted from a renegade pirate station, featuring up-and-coming DJs and established ones making waves in the industry. There are a few pirate radio stations in SF, but the programming at Radio Valencia is very eclectic and the studio is professionally equipped. The nice thing about Lips & Rhythm is the time slot. 8pm on a Saturday is primetime to broadcast tunes straight to your living room while you get ready for a night out.

How is it influenced by the music culture up there?

I wanted to do a show that featured everyone playing on the scene during this special place in time. There are a lot of really talented producers and DJs in San Francisco that should be broadcasted to the world and aliens. The show is pretty casual and transmits that west coast vibe my San Diego friends embrace and share with me. It’s all about “cruising” and mixing music.

What kind of artists do you like to feature? How do you pick who you will showcase? How does it serve the community?

I have a long list of DJs in this town who I badger until they find a night that works well for them to come on and pilot the spaceship for a few hours. Some of them are friends and a lot of them I met while working as a music journalist and professionally raving. There are a bunch of mini camps in the scene, so it’s nice to have one-on-one time with artists as individuals, where they can play what they like and we can talk and promote their projects and local events. Lips & Rhythm is an outpost for anyone, in any crew or click, to drop by and play the jams from the Bay Area and beyond.

When you first started the radio show, did you always know you wanted it to turn into a record label?

What made you decide to do it now?

I wanted to start a new creative project with some of my wildly talented friends and I have nothing to lose. The radio show is a platform for friends to play music and the label will be for friends to create and share music. It seemed like the next logical step to take and there’s no time like the present.

What do you want lips& rhythm to be about? What’s the overall vibe you want to give off?

I want the music to transport the listener to a timeless place of adventure. It will be the record you wanna hear drop at that daytime party when you’re on some tropical beach, the sunshine vibes. Music played in a natural setting is more appealing to me now then dark rave caves, so I want to convey that with the label. Smooth melodies, chunky bass lines, floating vocals and exotic sounds are some thoughts that come to mind. Music is such a powerful form of expression and in this crazy world I just want to transmit love in the rhythm.

What kind of music do you want to put out? will it span across genres? or a specific style?

The label will put out a variety of dance music, anything that moves the soul. I’m sure things will evolve over time.

What is your vision for lips & rhythm in the long run?

That some day many, many years from now someone will find one of these records in a shop and say, “These guys were on it! This is a jam!” then put it on and smile. I’d like to have a strong artist roster and eventually do some showcases overseas. One of my dream goals is to reunite Born Jamericans and make a record with them.

Rumor has it, you’re gonna be throwing parties, tell us more about Lips & Rhythm live …

Rumor has it that it’s because I’m putting out Ché Torres’s first EP this autumn?! I’ll be throwing an intimate party on the first day of summer to rally my homies in the scene to get down and properly light the wicks on this rocket. There will be a bunch of my friends who have been guests on Lips & Rhythm tagging on the decks all afternoon, plus some other surprises.

Will this be a regular running party series? Or will they be special sporadic events?

There will definitely be a release party for every record that comes out each season, plus other events. I have a feeling it’s going to be a good winter to.

Yea, my boys Bells & Whistles are doing one of the remixes on the Ché La Vi EP and so is this very talented guy named RYBO, who is working with Ché and I on the record. BIG UP to all of you for your support!

Any dates, specific info you want readers to know to watch out for?

June 21st there will be a Lips & Rhythm showcase at a private location in San Francisco from 12pm-6pm. Keep checking the Facebook page for updates and stay tuned to the show. The Ché La Vi EP is due out in late September, please standby…

To round us off, tell us a little bit about YOU … What’s your story? Musical background? Give us the dirty deets …

I grew up in New Jersey on a healthy radio diet of KROCK and Hot 97 as a young kid. By the end of the 90s there was such an interesting blend of musical genres that it seemed like anything was possible and I began playing guitar at 12. I was in the Ska and Punk scene and those times were ruckus. However, I was always into groove music like James Brown, Marvin Gaye and Bob Marley. So the band I was in played funk mixed with rock and I would rap over these slap bass lines. After another band that was more indie-like the scene sort of changed or I got bored with it. I think the slam dancing got old.

I began to like the after parties more, because people played Hip Hop and chilled. I studied music theory throughout high school and was in band and chorus. In theory class we used Mac G3’s to compose music using midi software called Music Time. It was state-of-the-art then and I always strayed from the lesson to make beats and loops. I distinctly remember my teacher being like “Uh, that is not today’s tutorial, but I like where you’re going with this space jazz. C + !” Going to college in Hawaii was also a massive influence on me. My roommates and I use to rent a studio for $15 an hour to play reggae music as a full band. There was always a jam session. The Chinatown scene was growing then and I use to go see DJ Harvey all the time at ThirtyNine Hotel. Honolulu has this mysterious energy after dark that still haunts my dreams. There were some enchanted down tempo jazz sessions and a few raves that ended around dawn out there that I’ll never forget.

About a year ago I decided to get back into making music. I picked up my guitars back in New Jersey and bought some software, a keyboard, monitors, drum machine and built a home studio. I just decided that I had to make music again, because it was the only thing making sense to me anymore. I recently DJ’d one of the last Afrolicious parties at The Elbo Room and it was a solid time.

When did you fall in love with music? Specifically electronic music?

I somehow got a copy of Thievery Corporation’s The Mirror Conspiracy and it blew my mind. Being a huge fan of dub and Jamaican music I immediately got what was going on and thought their use of effects, tape-delay and bass lines were genius. The looping and multi-lingual singers made it one of my favorite albums to this day. By then I was toying with software like FruityLoops and began exploring electronic music. I was also into LCD Soundsystem and The Rapture. That whole scene on the Lower East side was going off back in like 2003 and I use to go to crazy after parties at the infamous Lit Lounge where someone from the DFA roster would always be spinning records.