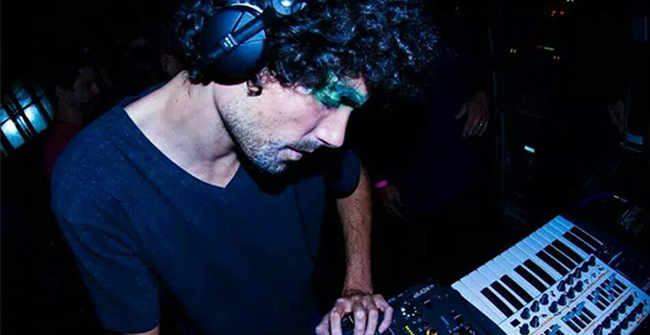 Jeremy Ismael never stops moving, both figuratively, and physically, from his more adventurous chosen path through life, to the small space in between the decks. Puerto Rican born, and 100% Florida sunshine raised, Jeremy would never say that he doesn’t need an introduction in the local Miami scene, and as a brutally honest, humble human being, he’ll always introduce himself anyway.
His levitation of sorts, into the world of music began early, with the sounds from his father’s jazz records. Those melodies and bass lines stayed with young Jeremy, and as a teen, directly

influenced his gravitation towards the UK’s acid jazz , a fresh new genre at the time. Upon graduating high school, he enlisted in the army, and was stationed in Wurzburg, Germany; a long time host of the US 1st infantry division since World War II. The next few years would see the official birth, and development of the head banging monster we all know and love today. At every opportunity Uncle Sam gave, Jeremy made the four and a half hour train ride, to soak up the no-nonsense dance music culture in Berlin (that’s two essential mixes, and some change). Coincidentally enough, Jeremy’s arrival in the city was aligned with the establishment of the now legendary Watergate Nightclub (est. 2002), a two room, split level venue, that regularly hosts the best talent in the world (sound familiar?). His most notable, and or memorable experience was the debut of the then up and coming German duo, known as M.A.N.D.Y, the rest is history.

Needless to say, he left Germany, and the military, as a broadened young man, a cultured fan of dance music, vinyl head, and blossoming DJ. As the universe would have it (again), Jeremy’s return to South Florida was perfectly aligned with the much needed renaissance in Miami’s own dance music scene, as he quickly became a core part of the then fledgling Electric Pickle (est. 2008). He’s since built a network of influential friends in the industry, and vastly expanded his knowledge as a DJ, and more recently as a producer.

I’m from tampa fl. Musical upbringing would be that of a jazz back round. I was always a bit of a loner when it came to music in my family.

Started a little before and while I was in the military listening to acid jazz electronica and trip hop. I picked it up from a guy down the hall bye the name of Dan, he was always playing the good tunes and one day just kinda popped in there and started asking him what this music was.

Can you tell us a little about the city you live in now and the scene there?

Living in miami now. As for the scene here it has gotten a little better as far as the quality of music coming though here. It has definitely changed over the years with more and more people coming in from other countries.

Miami is certainly a destination spot for great music. What is it about this city that brings people back time and time again?

Now a days it all a about special events, or pop up party’s here in miami also the art scene here has definitely stepped up its game something to look forward to here in miami. One in particular is the Three Points Festival, definitely one for the books coming up in October.

Who are some of your favorite producers/labels right now?

A lot of the artists that are coming out of Innervisions: Michael Gracioppo and Dixon. M.a.n.d.y the guys from Life and Death: Tale of Us, Recondite. Also Bob Moses, Frank and Tony, Bedouin, Silky, Mercy of Music, Low Tide, Oskar Offermann, , like canson and NU alot of the new locals here joyson uchi Emilio arias thunder pony

Advice would be just keep doing what you love. It may not happen now, but it with happen when the time is right, so stay humble.

Vodka on the rocks.

Some thing about mix honestly I was having one of those days just in my head at the moment kinda just a portrait of what I was going through at the moment different thoughts welcome to the door to my head.