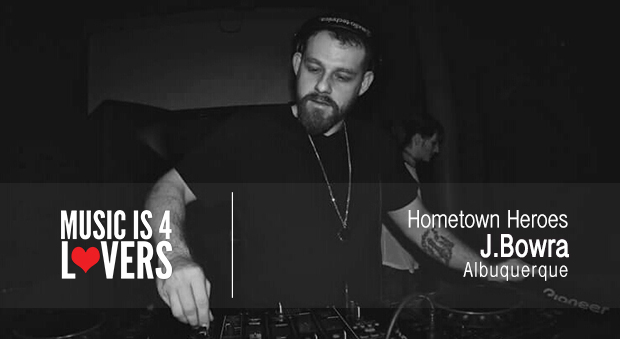 New Mexico born and raised DJ, producer and promoter, J.Bowra, has been infusing the desert with house and techno for over a decade. J.Bowra’s love for Albuquerque is major; he influences the growing scene in more ways than one. Besides his monthly residency, DOWNLOW, J  has shared the stage with numerous high profile artists such as Green Velvet, Claude VonStroke, Marco Carola, Umek, Funkagenda and J.Phlip.

J.Bowra has a bright present and an even brighter future! We’re very excited to add him to our Hometown Heroes roster.

How did you get into in dance music and Djing? Is there a specific moment of inspiration you can remember?
I first got inspired to DJ from watching videos of DMC competitions, I wanted to be a turntablist, I was around 15 so I got a job saved up some money and bought my first pair of Numark Turntables. Soon after I started to go to raves and DJ at small house parties. Soon after that it was clear that making people dance was what I wanted to do

Tell us about the scene in NM. How is it unique and what sets it apart?
It’s more of a community and a family than it is a scene. In my opinion, it has been really cool to see how much it has grown. So many more people are interested in dance music and it has made the promoters step it up and quality of events have never been better. I mean there’s two festival style events happening here this summer so that is big! Basically New Mexico is dope and I’m proud to live and play music here.

Who are some of your biggest influences?
My Family, Friends, and the City of Detroit.

Any projects or events planned for 2016 we should know about?
There is a lot of awesome things going on this summer. I’m hyped to play at the El Rey Theater in few weeks playing a special B2B with my friend Ana M for Claude Vonstroke, the Digital Desert Campout in June which is a 4 day festival under the NM Stars, my monthly DOWNLOW night at Effex Nightclub, and my new fun low key thing is DJing under an alias playing no Techno or House.

Most memorable gig and dream gig?
Most memorable would be when I opened the night up for Marco Carola and Carl Cox in El Paso, Halloween 2011. My dream gig is being able to play Aaliyah and Jeff Mills in the same set at a warehouse at 4am.

Drink of choice…
You mean Drinks? It is always Tequila but Gin Pineapple is good, also a big fan of water.