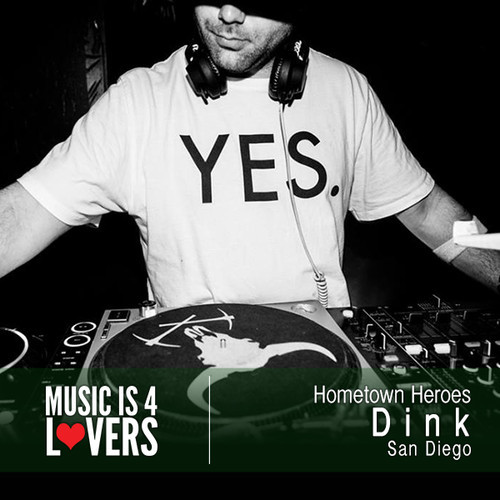 DINK has been a music enthusiast his entire life. Growing up as a percussionist, he was drawn to the idea of creating energy through rhythm. This allowed him to quickly adapt to the rise of beat-driven electronic music in the mid-to-late 90s. After indulging in the different realms of dance music, he became hooked on the idea of music through technology; always craving the newest, freshest sounds. After getting a copy of Ableton Live in 2006, there’s been no turning back. With the ability to really experiment on the fly, he realized what drew him in was the idea of personal improvisation, sampling, and fusing different genres together, leaving the door open for endless possibilities. Instead of indulging into a style of music that will become phased out over a short period of time, DINK plans to evolve along side the progression of modern dance music.

Where are you from originally? How did you get into DJing and producing house music?

I grew up in Houston, TX. The first time I heard electronic music I fell in love with it.  Chemical Brothers, Prodigy, Sasha, Digweed, Shpongle, Daft Punk, the list goes on. When I was in high school I started to understand the concept of DJing and realized that I wanted to start doing it. After high school I moved to Boulder, CO where I attended the University of Colorado. It was there that I began going to clubs and shows and became part of the music scene. Around this time I also became obsessed with collecting and finding new music. During my junior year, I got a copy of Ableton Live and began making mixes and really exploring all different types of electronic music.  Since moving to San Diego 4 years ago, I have really defined my sound as a DJ, however I would still consider my mixes to be rather eclectic.

Can you tell us a little about the scene you are in and your involvement?
The house music scene in San Diego is great! I’ve met so many wonderful people through Lovelife, Desert Hearts, LiB, Burning Man, etc… I have played shows with a wide variety of DJs and promoters, along with throwing a few of my own.  I also work for an artist management company called Madero Group, where I do graphic design and help contract shows for a number of different artists on the roster.  We also put on the V Elements festival in collaboration with Indie Yoga and Alternative Power Productions. Our third one will be taking place September 27th on the Broadway Pier in downtown SD.

How do you feel about the large rise of burners now in our scene?

I think it’s great. The more people being exposed to the music the better. I like the burner culture because it promotes open-mindedness and self-awareness.  Burners tend to be more considerate of their surroundings on the dance floor and spread good vibes.

What is more important when going to a party, the music or the vibe?
It depends on the show. For a dance party with a DJ, vibe is king. It’s all about bringing people together under one rhythm, allowing dance as a means of connecting with other people in the room. However, at a concert for an artist playing all original material, I understand that they are showcasing their art and the vibe is less important. However, you will rarely find me at these types of shows because vibe is something that is very important to me when I go out.

What do you find is the biggest challenge playing music for people?
The biggest problem for me is figuring out a way to take people on a journey in such a short period of time. It’s hard to really showcase your skills when trying to cram your “sound” into an hour-long set. I feel much more relaxed with my track selection when I have more time to work with. I like a good 3-hour set. Also, as a DJ it’s important to cater to the time slot you are playing. If I’m opening for someone, I need to tone it down a notch, as much as I’d like to just bring the heat. So it’s all about finding balance between doing your job, and showing people what you are all about.

If you gave one piece of advice to an aspiring DJ what would it be?
Go out and become part of the music scene. Meet people, find out who is throwing parties and try to get involved. Think about what you bring to the table and let it be known. As much as everyone wants to think it’s all about the music, there are certainly politics as there are with everything, so it’s really important to build a following among friends and finding other people around town who like the same kind of music and like to go out and dance.

What’s the future hold for DINK?
I’ve been working on my own productions as of late. I’ve been more focused on DJing the past few years, but now I’m ready to take my sound to the next level. I’m currently in the process of building a recording studio in my garage along with all the Desert Hearts guys and I plan to have my first EP out on Desert Hearts Records by the end of the year. Stay tuned!

haha… But lately I’ve been getting whiskey gingers at the bar.
September 02, 2014 By Sand