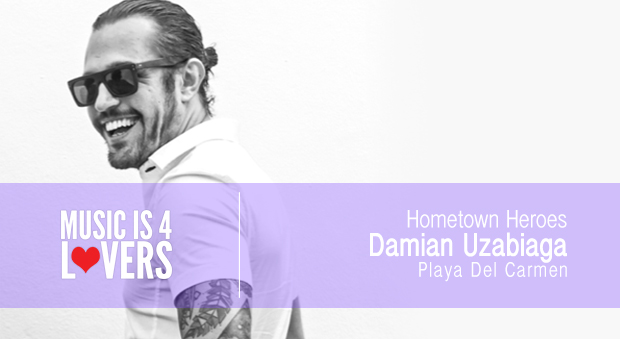 Damian’s Love for electronic music started almost 15 years ago. When he first moved to the east coast of the U.S.A. and started listening to old school house music.

He grew up listening and playing around with different genres like R&B, experimental jazz and progressive rock. He decided that he wanted to spend the rest of his life inside of a recording studio.

Pushing an eclectic take on deep house and techno. Damian’s music still very influenced by Disco & Hip Hop music. His Music has been released on different labels like Get Physical Music, Akbal Music, Union Jack records, among others.

He moved to Barcelona in 2009 to study audio engineering. Thats where he met friends and partners Miguel Puente & Sishi Rosch. He joined the Digital Delight Label right away and started producing music with the crew.

Now back in Mexico. he keeps pushing forward the Playa del Carmen underground scene with his unique sounds. focused on massive groove on the drums, sick base lines, and selected music lines.

Whether behind the decks on in the studio his approach to music is always funky and fits perfect for the time and place that he is playing at.

Such is the quality of his performances that he has got support from people like DjT, The revenge, Ten Walls, Daniel Solar, Lee Brinx, Alexis Raphael, and Max Chapman. to name a few.

this days Damian is working really close with union jack records. with an upcoming ep on the label that will include massive remixes by Pezzner, Cameo Culture and Zombies In miami. as well on his side protects Fuchse and Plaka where he will be playing live.

I moved to Philadelphia to study high school when i was 14 and over there i meet a few people that where listening to the global underground cds and i really liked it. one day we got some fake id and went to this club where Josh Wink was playing and he got me supper hooked on the house music world.

What is it about Playa Del Carmen and The Maya Riviera that makes it such a perfect place for dance music?

I guess it has to be the influence of so many people from all over the world moving here.

Who are some of your favorite producers/labels at the moment?

I love maeve all the releases that those guys put out are really cool also Baikal that is one of the heads of the label is one on the best djs i have seen in a long time. i really like pampa records a lot and all day i dream. most of the music they put out has this vive that i just love… i really enjoy the work of mexicn labels like akbal and union jack. as music producers there is so many people making cool music this days probably gill motntiel has to be in my top dave dk also blows me away with his production there are so many names for this list that i would have to stay here and do this all day long.

Can you tell us about a particular gig that is a personal favorite for you?

I enjoy most styles of music. whenever we have the opportunity to my mom and I love to go see live classical music together. at the moment im listening to a lot of Elton John. i used to be a huge progressive rock music collector. I just saw Zappa plays Zappa play live last week and they where amazing.

Any advice for aspiring DJs trying to break into to scene?

To spend money on music, collect vinyl, buy wav files instead of downloading bad mp3. Also to focus in production i don’t think you can be a dj in 2015 if you don’t make music.

I have my new ep coming out in january so thats a cool kick off to the year. I also hope to get a bunch of dates to play my live act.

I love to do melancholy mixes music that is deeper than what i would play at any club or party.